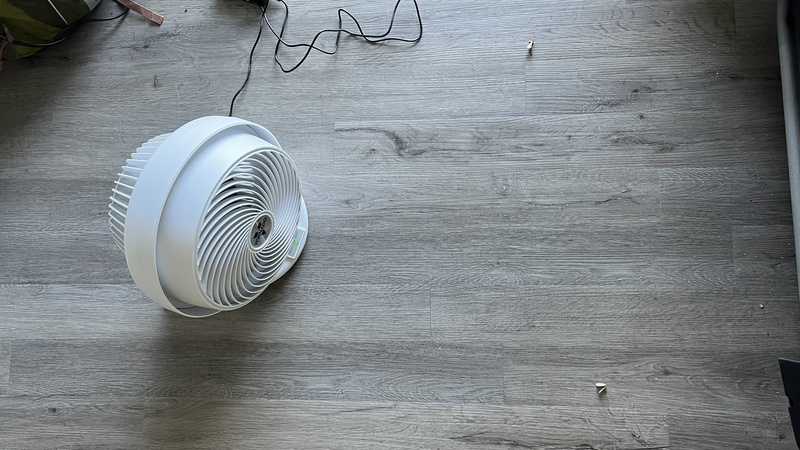 How crappy that moment was: two moths, fluttering around each other, zoom this way, zoom that way, and hey, what is this neat air flow, BOOM, dead, bodies flung out of the blades.

I stood looking at them for longer than I should have, pondering what consciousness or awareness a moth may have, what this thing we call life is, and what connections my consciousness might have to these dying bodies. Of course, death and dying and the fraility of all of this has been weighing on my mind recently. Too much death in the last couple years, too much all this in the last couple days. Why does something have to die so that I can live?

The moment passed. The object that caused their deaths became the mechanism by which I removed them from my place, the whole thing making me not happy.

As one does after a really hard workout: one goes for sugar (or in my case, even more sugar). 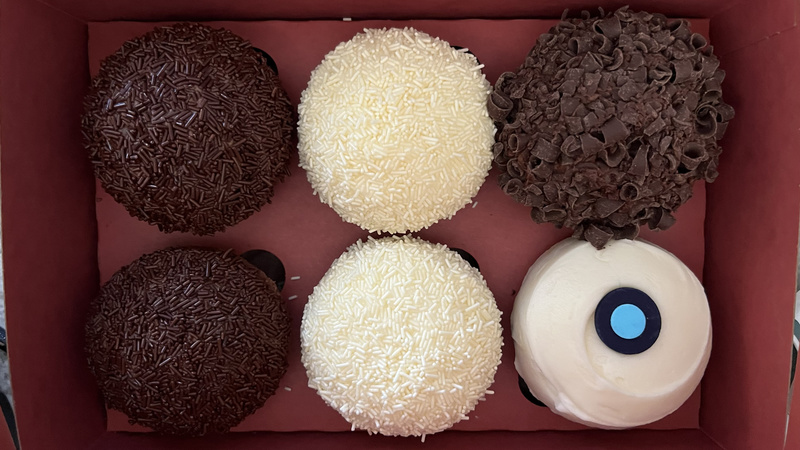 As my intimate circle of friends continues to shrink, I have fewer people to feed cupcakes to on my birthday. I mean, fewer people to celebrate with. Wait, no, that doesn't sound much better. I adore that Martha messages me every birthday. I look forward to outdoors things with her some day.

Anyway, birthday number gosh what the heck is it now, something something prime it is. Time to walk across the park, singing at the top of my lungs, "IT'S MY BIRTHDAY, HAPPY BIRTHDAY! HAPPY HAPPY BIRTHDAY TO ME. LET'S GO!" while waving a box of cupcakes around.

Again, tradition. You can't break from a tradition this good.

Shame is a Heavy Burden

Shame is a heavy burden. It can lighten only when brought to the light.

Tonight, Kris and I had a very similar talk that Andy and I had had on Sunday night. I told him what I had been doing for the last eight years. I filled in gaps when he asked questions, which wasn't often but also wasn't zero. He told me that, yeah, he knew much of what I told him. He asked what was going to happen going forward.

The irony of the timing was not lost on me, but I told him the best I could predict and commit to. I let him know that unless he tells me otherwise, our plans after Vinson are the plans as I understand them.

In not wanting to hurt anyone, I hurt a lot of people. I made a lot of mistakes. In many of the 12 step programs you hear about, admitting what you did to those you harmed, and then making the amends you can, are two of the biggest, hardest steps you can do. Well, I'm not in a 12 step program, but I see the benefit, beauty, release, and betterment of those two steps, so I did them. I'm working hard to be more upfront and honest with people, and to keep my boundaries. That seems to be a thing these last 2-3 years: boundaries, and people learning to set and keep them.

This upcoming year, this training, this mountain, all of it is part of my year of healing. The Year of Healing™ was supposed to be 2022.

It starts tomorrow instead. 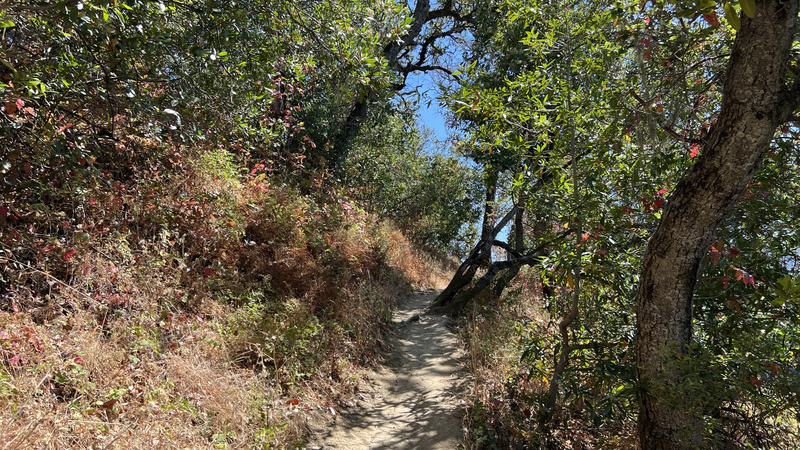 Went for a recovery hike today on Lookout Trail, starting at the Madrone campsite in the Steven Creek Reservoir area. This is one of the hikes I did a lot last year when I was training locally, with the hill going up Lookout Trail being somewhat tiring. Today I went up the hill, and up the hill, and up the hill, and either wasn't going fast enough or it wasn't as steep as I remember. What threw me off was that this view kept happening. I kept thinking I was nearing the top of the hill, as this view of the trail going up, with sky visible through the trees clearly meant I was near the top. I was not. I saw this view three times before I was at the top. Cracked me up. Had to loop around a new trail for me to hike the full 45 minutes of the walk. Getting stronger! 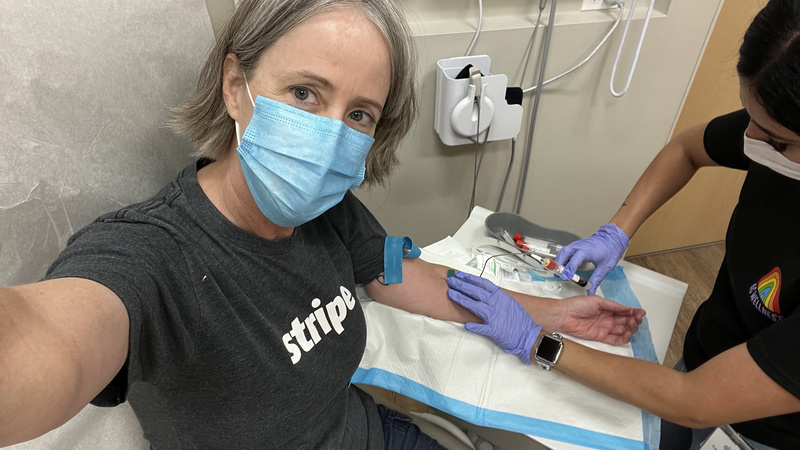 I went to the doctor today for my annual physical. I have to say, our medical system is really not conducive to receiving care quickly.

Today's appointment was for referrals for the doctors I actually want to see. While I am happy that I was able to schedule all the tests that I wanted, and receive all the referrals that I also wanted, I'm less happy that it is colonoscopy time. When asked, "Do I want a referral [for the colonoscopy]?" my answer was "No, I don't want one, but I understand that I need one, so yes, I will take a referral." The provider laughed.

I managed five referrals, three tests scheduled, and a whole lot of feeling better about my health. I still weigh too much.

I went over to Andy's place today. We continue to talk about things, which is good. Was lovely to hear about his trees, and how they are doing. 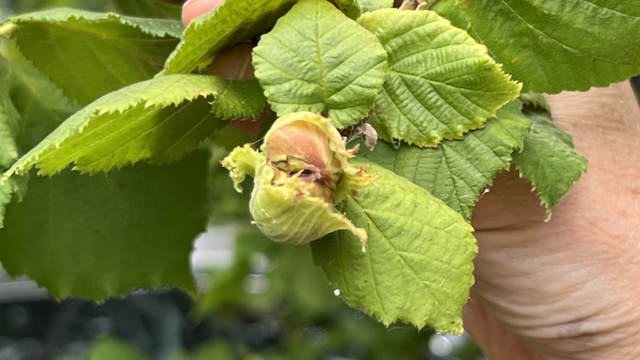 At one point, Andy said his hazelnut tree has ten new nuts, could I find them. Finding the ones he did took him a good fifteen minutes. So, I looked up. After a few minutes, Andy let me know that the partner hazelnut tree was likely in that direction, which told me which side of the tree to look on. Eventually, I found a pair of nuts and pointed them out. Andy laughed, and said those were new ones. 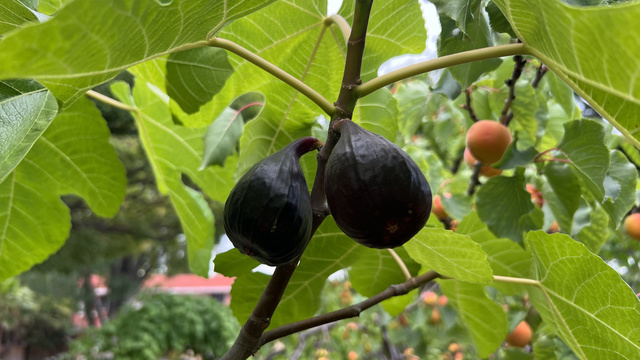 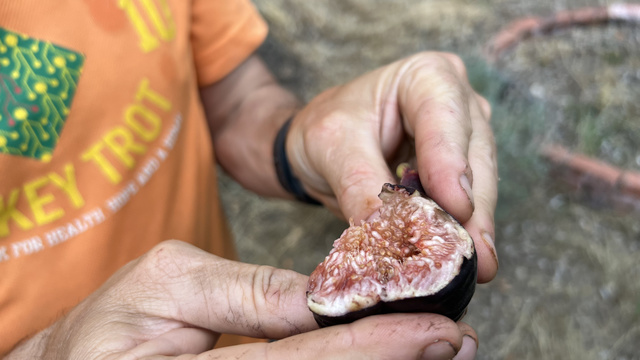 END_OF_DOCUMENT_TOKEN_TO_BE_REPLACED

Pulls up chair...
"Only what you take with you."
The Older I Get
Less Blogging, More Journaling
Holding the Heat

Because How Could She Be Competent?
That Phrase's Location is Important
When A Beginner Asks For A Project To Do
Yelp Reviews are Pretty Much Worthless
The Gap of Fifty Years