Last week, Jonathan made a comment about my collecting things. I suspect he made the comment more as an amusing observation than anything else, but it stuck with me. Though I don't collect physical objects, and am back to getting rid of stuff again, I certainly "collect" license plate numbers. I think the collecting of plates is more of an enjoyment of playing with numbers and letters and words, and the traffic I was stuck in when I lived in Los Angeles.

These days, I have found, more often than I would like to admit, that I hesitate to spend money when the currency I'm holding has an interesting number sequence on it. It's rather like chasing the license plate holy grail of two characters, looking at currency serial numbers.

If I ever manage to find one with only two numbers on it, or even one number on it, I'm 100% sure I won't be able to spend it.

In the meantime, however, I'm okay with just photographing it and spending it. 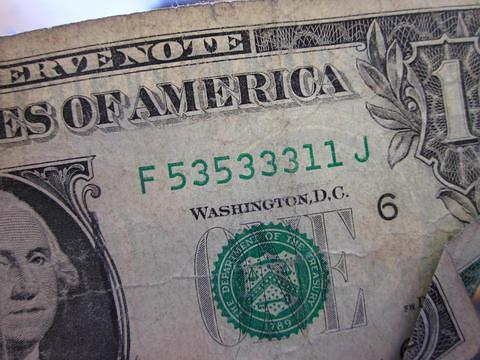