After I picked Jackson up from camp, after we ate a late lunch, and after he recovered somewhat, Jackson and I took the dogs off to the local school. As the two of them wandered around sniffing the butts of all the dogs around us, Jackson and I started throwing the disc around. Given my experience with throwing around the disc with the rest of my family, I had very low expectations of how this would go, but I figured I'd have a good time anyway: throwing around the disc even if I have to run for every throw coming nominally in my direction is always fun.

So, I handed Jax the disc and wandered a bit away, and let him throw.

The disc flew right to me. I didn't need to move a step to catch it. Okay, this wasn't going to be too bad.

A couple more tosses later, and my throw to Jackson went off target. He saw it coming, took a few running steps and launched himself into a beautiful full extension layout, grabbing the disc with both hands and landing as gently as one can from an 18" high textbook diving grab.

I stood there, jaw on the ground, stunned disbelief.

And then minor regret that I didn't have my camera out and ready for his spectacular dive.

The kid, on his second catch, managed a double handed layout.

I pulled the camera out ofter that and managed to catch a few pictures, not many spectacular, and none of them as great as that (need I say again? I do, because it was AMAZING) layout. 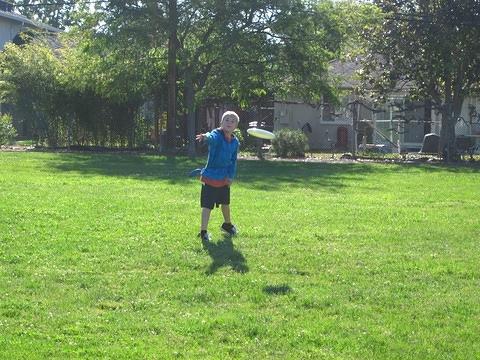 After a while, I stopped throwing backhand, and switched to forehand throws. After a couple of them, Jackson started trying trying to throw forehands. His throws were a little off, so I wandered close, and offered some tips. He switched his grip to a power forehand grip, then started snapping his wrist.

Two throws later, and he threw a perfect forehand into my gut.

And my jaw landed on the ground again.

Mom had told me that Jackson was an outdoor, loves to move sorta kid. I wasn't expecting him to be able to both listen and immediately implement suggestions he heard. He's like the perfect student. "Do this." "Okay, done." The kid was fearless when it came to his body. I've heard the stories about how he's fallen out of a dozen trees, and broken a third of a dozen bones following his older brother around doing things a person his size shouldn't be doing, and how, when you ask him to try, he does, and does with his whole heart, whole body, whole self.

But seriously, watching it in action? 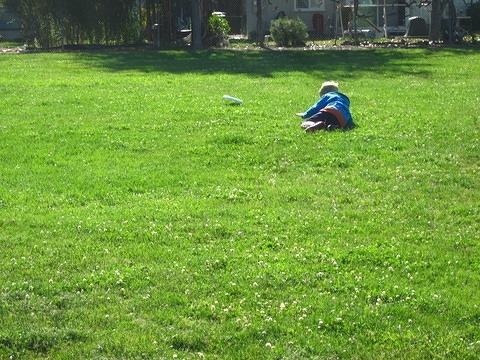