The rule now with Bella is, when she's awake and wants to walk, we walk. We walk as far for as long as she wants. If she tires, I carry her home, but we walk as long as she wants to move. One of the benefits, I guess, of knowing you have fewer than six months to live: people will help make your remaining time as nice as possible.

So, when Bella wanted to walk, we started walking. About 45 minutes into our walk, Bella was still going strong, much to my surprise I will admit. We were heading down the final stretch, the street leading to our block, when I heard a number of sirens. Having just passed the local Old Folks Home, I figured they were coming for someone who was either in trouble, or had just passed, and was somewhat sad for that person.

The trucks came flying up the corner, and, after honking at the idiot who flew through the intersection without stopping for the sirens and barely cleared the oncoming fire truck by less than 20 feet, went straight.

Confused, I walked a little faster to the corner, finally noticing the smell of burning in the air.

Related: seriously, nose, wake the fuck up already, and start noticing these smells.

As I approached the corner, I saw the bonfire a guy had started on the asphalt next to the apartment complex's dumpster. It wasn't a giant fire, less than a meter around and maybe 40cm tall, but, it was open flame, and it was spewing smoke. I pulled out my camera (what, you're shocked by that?), and took a few pictures as Bella tugged on the leash to stop walking, she was busy sniffing over here, dammit. 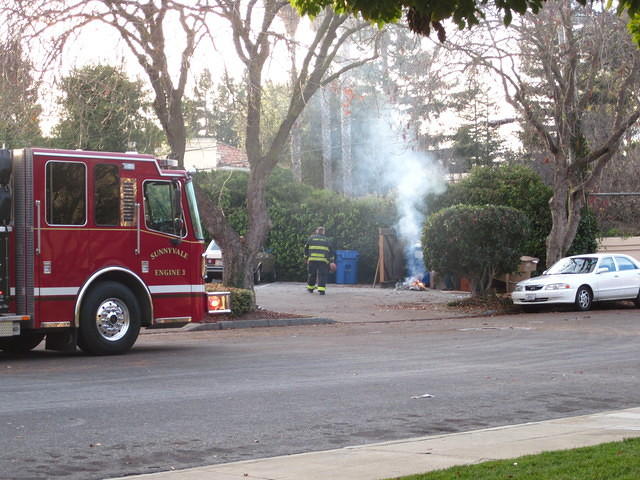 With the camera out, I watched one guy jump out of the lead firetruck, and hustled over to guy next to the fire. The fireman didn't pull on all of this gear, he recognized what was going on and was heading over to deal with it. The other guys, however, jumped out of the trucks, pulled on their jackets, plopped on their hats, and wandered over to the fire. A few of them turned back to the firetruck and pulled out a few items to help them put out the fire: an ax and a large fire extinguisher.

Bella was willing to walk again, so we crossed the street and started walking past the second fire truck. As I walked by the truck, I realized the engine was on.

The engine was on.

The nearest fire fighter was now 60m away from me, on the opposite side of the truck.

The driver didn't appear to lock the door when he walked away.

Did I mention the engine was still on?

So, apparently, the process to stealing a working fire truck in Mountain View is:

1. start a small fire in the far side of a cul-de-sac parking lot just over a neighboring city's border
2. call said neighboring city's fire department
3. report said fire, but don't describe it in detail
4. wait
5. when the fire trucks arrive and all the fire fighters are talking to you about your fire, possibly jockeying to see who uses the extinguisher to put out said fire, send your accomplice over to the remote fire truck that didn't fit into the cul-de-sac
6. accomplice hops in said remote truck, and drives off

Now, how you KEEP said stolen fire truck is left as an exercise for the reader 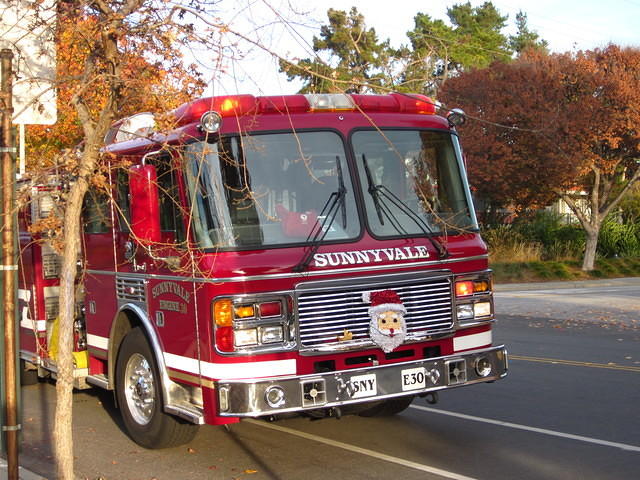