After completely forgetting about the Master Gardeners training class this morning, only to remember with 10 minutes before I'd need to leave to arrive on time to the class, I dashed to the class, and, boy, am I glad I went. I mean, aside from the training hours that I seem to be somewhat failing at gathering (a member can have only one video count for a couple hours of training, alas), the information was great.

We had Matt Ritter, Tree Man Extraordinaire, speaking to us today. Go on, search for him on the tubes. Ignore the state representative. Ignore the comedian. Ignore the drummer and the weatherman and the lawyer. That's right, the top guy, the botany professor at Cal Poly (heh, Cal Poly, there's a story with my giggle about Cal Poly).

He has written a book about tree identification, one which leads you through a flow chart to figure out what the tree you're standing in front of is. Before he talked about his book, though, he talked about trees in urban environments, the various numbers of species in California (all species is over 8k, native is 6k-ish, trees is 294, and so on), how the shift of urban/rural residency has shifted in the last 50 years (as of 2008, more people live in cities than not in cities, and there are 200,000 more people in cities per day, every day - though I think that last number was for worldwide), and why he wrote the book.

He's a good speaker. He handled interruptions with ease. At one point, a cell phone started ringing and, without missing a beat, he commented, "And, yes, I can ignore that phone. That happens every day in the lecture hall," and kept right on talking about trees, complete with a pause for the audience to laugh. He speaking style is one that, really, I'm tempted to drive down to Los Angeles to sneak into one of his classes.

The only downside to the class today was the odd arrangement of seats where I sat. I arrived at exactly 10:00 am, and figured I'd be one of the last people in the class. The seats were all full, so I grabbed a new seat from the stacks along the side wall, put my seat down in the last row, a seat's width away from the previous person who sat down. To my surprise about half an hour later, I noticed that no one was sitting close to me. People who had showed up later than I sat no less than four feet away from me. When small things start building up, they start cascading, and I have to say, when I realized that no one was sitting within four feet from me, it made me wonder if my sense of smell was completely gone and I smelled bad. Eventually I decided I didn't care much, as I was enjoying Ritter's talk, but it clearly bothered me enough that I wrote about it here.

Eventually, Ritter handed out cuttings and we walked through a flow chart to determine what they were from (Chinese Elm, if you are looking at the picture below). The technique is learning oriented: instead of taking a picture and sending it to an app for it to tell you what it is, when you have no way of knowing if it was wrong or not, you walk through various flow chart questions, with a definition list so that the questions being asked on the flow chart make sense, to arrive at what the tree is. An advantage of this technique, aside from just the learning aspect, is that by learning key features about trees, even if you don't know *exactly* what a tree is, you can guess pretty closely. I like that. 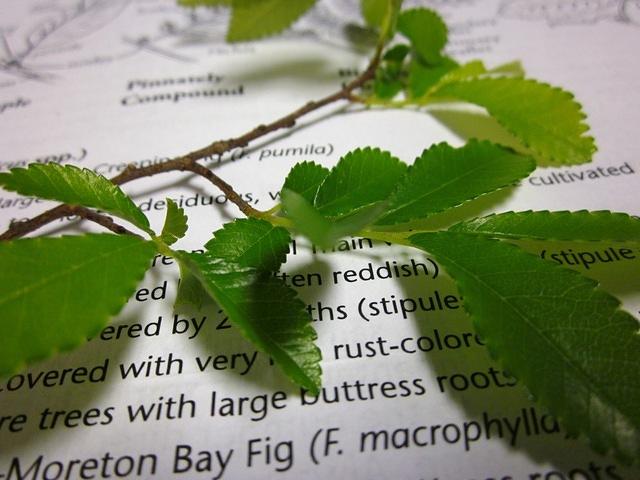 Ritter wrote the book, A Californian’s Guide to the Trees among Us. I saw a woman buy one for the Master Gardeners' Library, though the publisher is currently out of stock. Shouldn't be too difficult to borrow it once it arrives at the Library. I'm looking forward to it.

Sidenote: Ritter deliberately did not put typical tree life spans in the book, as people use life spans to justify removing a tree. From a person's lifetime perspective, trees live forever, as they have the ability to outlive all of us, given correct growing conditions. And, that's just it: the growing conditions dictate the life span of a tree. They very so greatly that listing a life span was a bit silly (yes, this tree lives between 20 and 200 years... uh... okay).