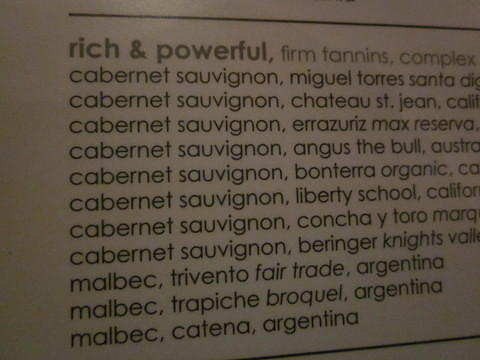 At dinner last night, we were handed the usual wine and beer menus. I ignored them at first, then picked up the wine menu to look it over. I've been a fan of Malbecs for a couple years now, with their replacing the Oreana Best-Wine-In-The-World™ status. Well, as long as they're Argentinian Malbecs, and not a California Malbec. The latter rather suck.

Sure enough, on the menu were a number of Argentinian Malbecs.

I looked at the list and wondered about ordering a glass, mulled it over, then put the wine list back down, knowing I wouldn't order a glass.

I stopped drinking alcohol 17 days ago. It'll be a while before I drink again. And I'm good with this.

I don't particularly like alcohol. I've never liked the taste, and I don't really like what happens when I've drunk too much. I've been told I'm a belligerent drunk. I've been told I'm a happy drunk. I don't know which I really am. I do know that there's a point before I'm too far gone when I know I've had enough to drink and should stop. Aaaaaand when I cross that line, I don't stop drinking if there is alcohol is in front of me.

Unfortunately, I crossed that line 17 days ago.

I don't need to drink alcohol. It's one of those things that if the doctor said, "You can never drink alcohol again in your life," I'd be fine with it, my life wouldn't be any less for the alcohol's absence. If she said, "You can't have chocolate ever again," I'd struggle a lot with that restriction.

I've done it before, gone years and years without drinking an alcoholic drink. I may miss the PARS (performance anxiety reduction serum) use of alcohol. I may miss the fun of a small whiskey tasting event. I'd say I'll miss the Portland blackberry drink, but that one is easily made non-alcoholic. So, no, I really won't miss alcohol.

And I'm good with that.