Home » Blogs » kitt's blog
More than just a salary« an older post
a newer one »No screwdriver in my backpack
Blog Instead of being asleep at 21:10 on 20 May 2015, kitt created this:

I went out to play ultimate tonight. I have to say, it was an adventure and a half. I had forgotten so many things that suck about ultimate, and remembered only enough of the good things to head out, and, yeah. Hello, injuries! I had fallen down the stairs at home last week, and was uncertain if my shoulder would be okay. With my achilles tendonitis from last season, I knew I'd be risking more injury. My knees have *knock on wood* been feeling pretty much okay. I'm way out of shape, which is depressing when I remember what I used to be able to do. I'm also slow, and it was cold so I risked hand bruises and... and... and...

And sometimes you just have to f---ing get out on the field and play. Sometimes the joy of movement outweighs the heft of the mind telling us "too cold, too old, too slow, too hurt," and you just have to play.

I arrived tonight on the fields with Mo, and the first thing I did was pull out my new cleats and a scissors I had brought with me. Four cuts later, I had cleats I was willing to try: 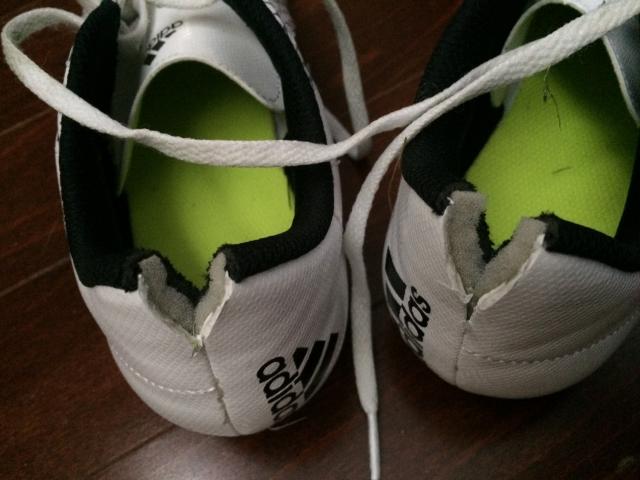 No way was I going to have achilles problems from poorly fitting shoes. No. Way. Downside of these new (pretty cheap) cleats is that the shoe laces are short!

The wind was bad. The team we were playing against knew me and, well, let's just say they don't like me (rant begins! They asked me last time we played against them, not to stand on the far sideline because they were worried my team would pass to me as I stood out of bounds. I declined to move back to the home side line where both teams were. They they asked me to remove my shirt, because it distracted them. I declined. WTF is this complete and utter bullshit? I mean, COME ON. It's the game. Just asking me to stand on the other side or remove my jersey is stunningly stupid. If my team throws to me, IT IS A TURN OVER, and you get the disc, why would you want to lose that "advantage." Then they asked me to stop calling out to my team. THAT IS WHAT TEAMMATES DO. They help their teammates on the field. To ask me not to help them WITHOUT BREAKING ANY RULES is unspirited on their part. When I kept declining to give into their infantile demands, they complained to the team captain. "She's not allowed to make calls on the sideline." My captain: "She's not." Them, "Well, she's really loud." Kevin, my captain, "She's allowed to do that." Them, "Well, she's not allowed to make calls." Kevin, "She's not." As far as I was concerned, if they are that focused on me, we're going to win the game, because they are no longer focused on playing the team. Take off your shirt. What a fucking stupid demand, ESPECIALLY to a woman who has had skin cancer. rant ends!).

The other team was experienced and we have a bunch of beginners, so it was going to be rough. I was uncertain on my physical health (ankles, feet, toes, achilles, shoulder, neck, back, quads), and well, I did not have a good time when we started. The wind (have I mentioned the wind?) was strong and the sun was blinding. I was alone on the far sideline trying to cheer on my team, without yelling at the offence (a new rule about coaching that I picked up this past Christmas break). I was cold, and uncertain to go in.

I went in a few times as the team settled into a routine. What position did I want to play? Cutter. Who were the handlers? Matt and Kevin and someone else. The opponents played zone a lot. The handlers shook out and we had a Matt show up who clearly knows how to play. We were down 8-2 at half (and, quite honestly, I was thrilled we had two points), and all I really wanted the team to do was punt the disc away from our endzone to give us a chance to play defence. With the wind, we had a chance.

I was still having a rough time when I saw Matt, who had come out early in the game with a sprained ankle, trying to warm up and test out his ankle. He's coming off an injury, wanting to get back on the field, and here I was just curled inside myself, grumbling how miserable I was and how no one was cutting deep for a punt-and-play-D style of play.

Well, shit, I can fix both of those.

And cut in instead of deep, receiving a leading pass, made an beautiful cross field pass to a wide open female teammate who just HAD to be rewarded for such a gorgeous cut. I turned to run upfield as my teammates and our opponents collapsed on her (I was reminded of Bridget at that moment, when she first started playing, and we wouldn't give her space to throw, just collapsed on her, and how things haven't changed), and there was a turn, but it happens.

The rest of the game was way more fun. We went on a 5-0 point run, though still ended up losing 15-9 (I think, we may have had more than 9, unsure). It turned out to be a fun game, a great evening, and a huge inspiration for more sprint training. I know the effort required to be back to the physical condition to be able to run without dying on the field. I'm finally to the point that I'm willing to put in the work to get that result.

Oh, oh, oh! Almost forgot! There was a kids league going on next to us, one field over. I went to talk to one of the parents. His daughter was learning how to play. I told him I was very happy to see kids out playing. He said he didn't know much about sport, only that his neighbor's kid plays. I told him it was the best sport ever, and that you could go anywhere in the world and have instant friends. He seemed happier his kid was learning. There were like 40 kids out, maybe 7-12 years old. Some had seriously good throws. It was awesome to see.