Home » Blogs » kitt's blog
We are all Unintentional Assholes« an older post
a newer one »Momma at Volcano
Blog kitt decided around 19:47 on 1 May 2015 to publish this:

Mom and I went to the volcano today. For the first time since 1982, the volcano has been spewing and sloshing hot lava (a term which cracks me up and makes me think of the Hot Lava ultimate frisbee team) in the caldera. Because of this appearance and subsequent sloshing, the volcano is quite popular as a tourist destination. Where previously you could just drive around a big hole at the top of the hill, now you can see smoke rising from the hill and red lava sloshing. Win! 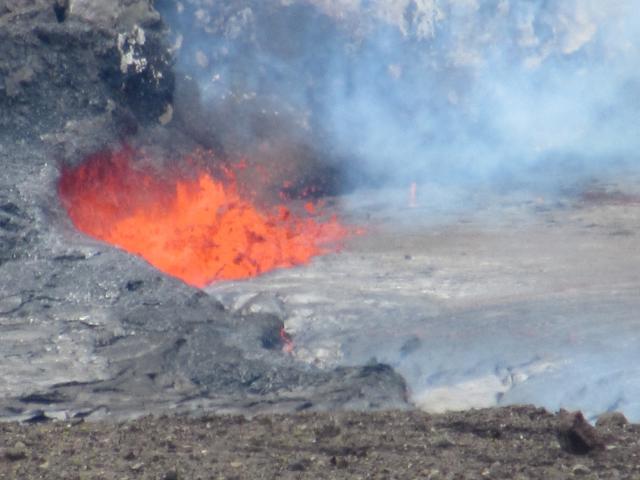 And people think Los Angelenos are weird with their freeways. :eyeroll:

Anyway, it was 82°F and sunny when Mom and I left from Kona in the morning. Going to be a scorcher of a day, yessiree. We left in shorts and t-shirts, arriving at Volcano to discover it was 61°F and raining and windy and OH MY GOD WHY DIDN'T WE LOOK AT THE WEATHER REPORT? Oh, wait, we did. It was supposed to be sunny. When the wind stopped and the sun came out, yes, it was nice. But neither of those happened very frequently.

We arrived at 9:47am, 13 minutes before the museum near the crater opened. We weren't the only ones in shorts and t-shirts, though we seemed to be the only ones who stayed in shorts. When the museum opened, we bought matching sweatshirts. 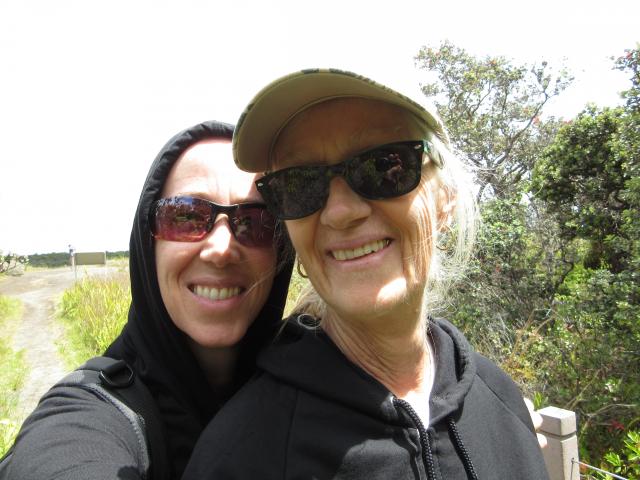 The view of the volcano sloshing is a distant one. We don't really want people falling IN to such craters. The road around the crater has been closed, so we couldn't drive around, and maybe oh, I don't know, "accidentally" head down the mountain for better pictures. Probably better that way.

There was a mounted, free, scope thingy at the top of the mountain by the museum. I tried to get a good picture through the lens, as I had managed in Tanzania on the safari with binoculars (and WHY DIDN'T MOM AND I BRING THE BINOCULARS FROM THE CONDO? I don't know), but didn't have as much luck this time: 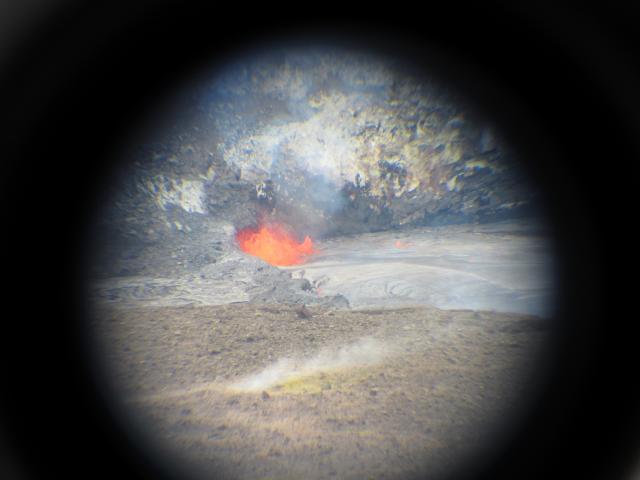 We spent about 15 minutes looking at the volcano (a slight exaggeration on the shortness of our stay), twice through the telescope aimed down, and had a quick spin through the museum, before Mom suggested the lava tubes. "Well that was a long drive for a short view," was our joke about how fast we toured the volcano, so maybe the 15 minutes isn't THAT far off. Given how far away the lava was there, however, I was done with the sight-seeing and was happy to head off. On the drive back to the park entrance, which is close to the tube entrance, we passed a section of the park labelled "STEAM VENTS." Mom had never been to them, and drove by the parking lot near them. After passing, asked me, "Want to go?"

So, we parked the car, hopped out, and looked around at all the steam vents puffing steam. I immediately walked into the plumage and stood there. Hot, water-laden air wafted around me, coating me in droplets. It was warm in the steam, but cold when the wind swirled. An interesting, not unpleasant sensation.

We wandered around for a bit along the edge of the hill until we found a map, and realized there was a 1.2 mile loop that we could do. Hot damn, off we went along the steam vent trail. 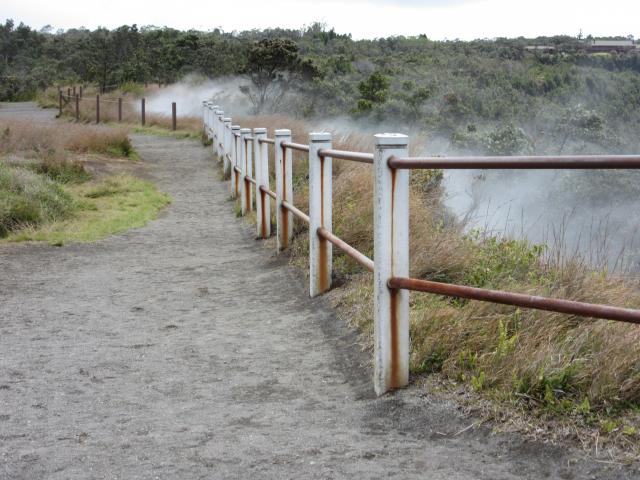 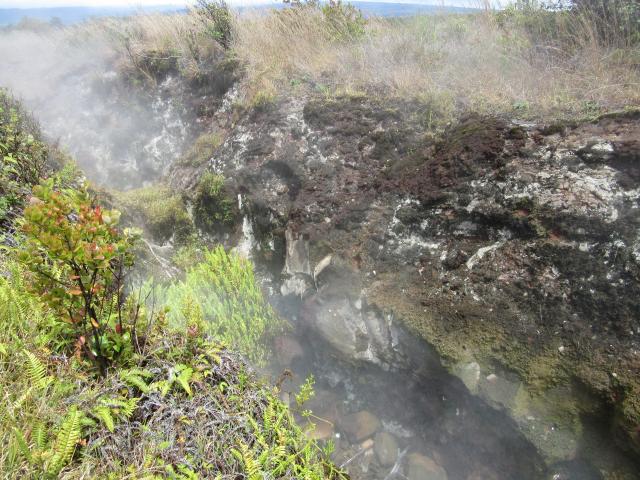 After a very short while, the trail descended down along the crater wall. Mom was a little concerned about how far we had descended, realizing that we'd have to go back up the hill and we were hiking the trail fairly quickly. If down was gradual and we were running out of trail distance, the up at the end was going to be brutal. Turns out, there was only one section that was really hard. Mom was careful, and the hike was nicely easy overall. We were both excited to be out and about and walking in nature. Hiking, even!

Hiking was something I had wanted to be doing, so I was happy that we had found such an interesting trail. 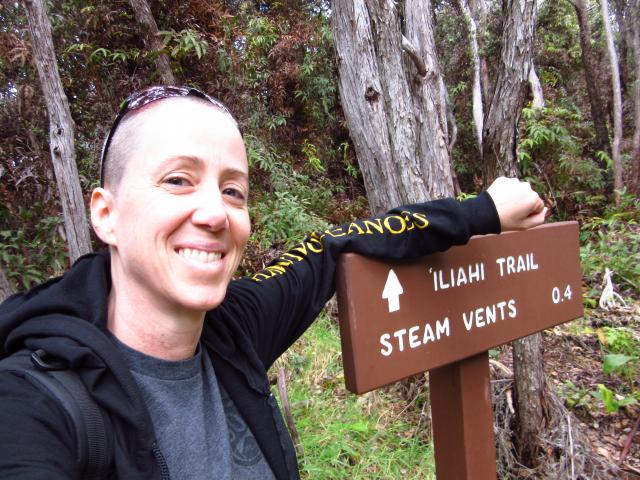 We also went to the lava tubes, tomorrow's tale. 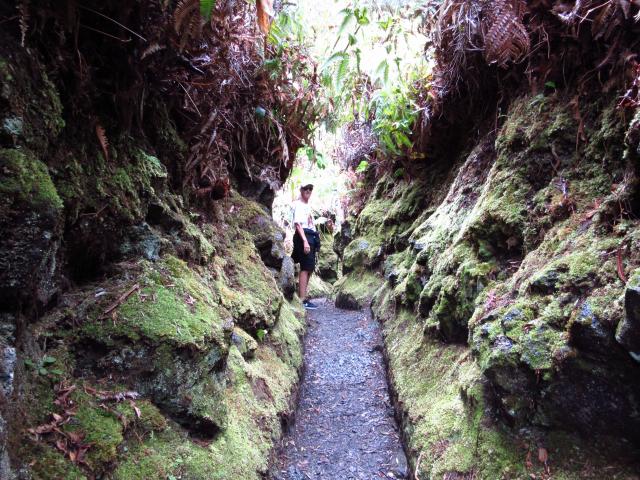