Home » Blogs » kitt's blog
Ever done a burpee?« an older post
a newer one »Crawling the Space
Blog Yeah, kitt finished writing this at 19:27 on 2 January 2016

Last year when I updated my site, I named my theme "kh2015" clearly with the intention of having a new look in the next year. I also created the theme in such a way that updating the look would be straightforward: just update the CSS.

Which apparently I did once, for Valentines day, and not any time after that.

Which rather bites, in terms of following through on the keep-the-site-updated intention.

Yesterday, when I went to update something, who knows what I was changing, I don't recall, I realized the theme name, and realized, yikes, already the next year! Time for an update.

So, yay, new theme done for 2016. I've de-emphasized the traditional blog, single-feed style of the site in favour of multiple channels. Rather than tweak until the design is "perfect," I've pushed out what I have, warts and all. I need to test it for performance yet, and I DEFINITELY need a better responsive images solution than what I have (which is pretty much typing in an img tag and filling out all the attributes).

I have a few more things to add to increase discovery, but, well, until the book is done and the tutorials written, this new look, warts and all, will suffice. 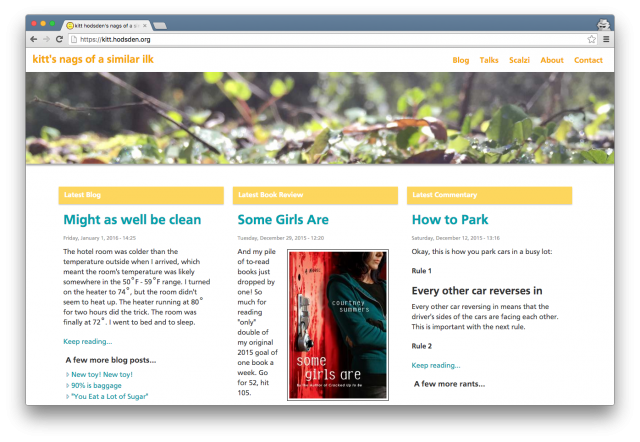