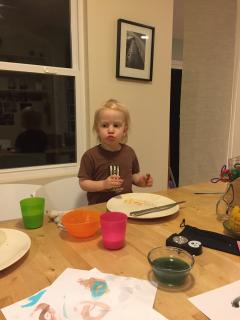 Chookie asked if I was available tonight to sit the kids. I quickly adjusted my evening plans so that I could say "Yes!" and said, "Yes!"

I showed up just before 7, and Chookie quickly took off to his adventure after letting me know, "They didn't finish their dinner, so they don't get dessert."

As soon as Chookie was gone, Sonja asked if she could have a cupcake.

Uh.... "If you finish your dinner, you can have a cupcake. You, too, Sebastian."

Well, if that didn't cause problems!

"Well, that's okay, no dessert. If you finish the sandwich or the soup, you can have a cupcake."

Wow, hey, the kid will eat crusts! Both kids!

Of course, the trick afterward was finding the cupcakes. I couldn't find them in the kitchen, or the dining area. Sonja said they were in the car, but when we went out to look in the car, and the other car, nope, we didn't see them in the front nor back seats. That's okay, Sonja said, she knew where the keys were. 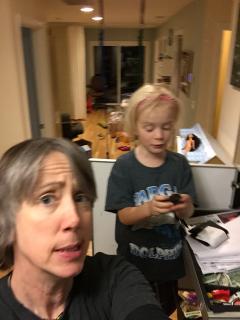 Yep, she did know where they were, which was a little scary. Kids know where lots of things are, I suspect.

Sebastian and I went back outside, bouncing the whole way, of course, to check the car trunk for the cupcake. No go.

Turns out, they were in the bag on the counter. Good eyes, Kitt.

With both kids having finished dinner, and cupcakes eaten, they wanted to watch television. I said, okay, not realizing the big one put on an hour show.

Okay, I'm getting worked over here. These kids are quick!

When the hour show managed to have a break after twenty minutes, BOOM, nope, television off. Didn't help that I couldn't figure out how to turn down the volume and it was LOUD (LOUD I SAY, OR WOULD SAY IF YOU COULD HEAR ME OVER THE TELEVISION), so really wanted it off.

We gathered around and read Sonja's new book, until it was time for bed. Except, according to Sonja, it wasn't time for bed.

"What time is your bed time?"

"Wow, we need to get you to bed pronto!" 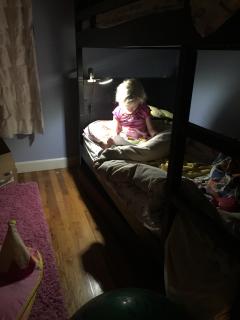 Putting on jammies wasn't such the ordeal as it was the last time I attempted the putting-on-of-the-jammies adventure. Turns out, if you sing to Sebastian, he's putty in your hands.

Which is a pretty powerful magic, if you ask me. Have you heard me sing? Exactly.

Sonja didn't want to go to bed, wanting to read one more chapter in her book. After I read said chapter, she informed me she said I had agreed to two chapters. I let her know back that, no, we agreed to one, but if she wanted to finish the book in her bed, I would be good with that. She readily agreed, and off to bed she went.

She was super cute, reading in bed.

After both kids were in bed, I went around the house putting things into two piles: things I know are not trash, and things that might be trash. Part of me felt a bit guilty, straightening up a friend's house, worrying that it might be seen somewhat as judgmental. What I was hoping for, instead, was that they would see it as I was intending: I want to help my friends who are parents to have a little more time to themselves. If straightening up helps them out, then I'm happy. If it doesn't, well, they have two kids who will fix things soon enough.

The kids and I had a good evening together. The only rough part was when Sebastian was leaning against Sonja's feet and she pushed him, causing him to fall. Sebastian made some crying noises. I saw the whole thing. Looking at Sonja, "Yes, you look guilty. I saw you push your brother. He was close and you wanted him away, right?" "Yes." Looking at Sebastian, "You're not hurt. You wanted to be close to your sister, and maybe you were too close. You're a tough guy, you're fine, right?" So many times kids cry because that's the reaction the adults expect from them, "OH, you've been knocked to the ground, you must be hurt!" except often it's an act. Talking with Sebastian and Sonja, we worked through it, yes, and without any crying. We talked about how Sebastian is looking up to his big sister, and how he wants to be with her, and wants her attention. We talked about how Sonja is sometimes frustrated with her little brother. I have no idea if any of what we talked about would stick, but they seemed to respond to my requests, "Please don't be mad at me for asking you to go to bed, like you do every night."

As if I would have not been mad at my adult self when I was five or something. Ha!