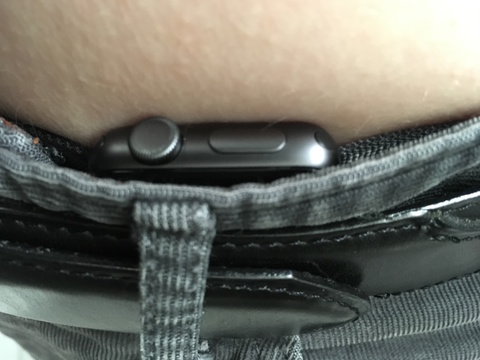 Anyone who spends any amount of time around me knows that I've taken quite a shine to Pokémon Go. I've been playing since last July, and just today managed to collect all but the location-locked Pokémon from Asia, Europe, and Australia (/me glares at Snook), and Igglypuff.

That all changed in December when Pokémon Go linked to the Apple Watch and enabled players to use the steps recorded on the watch to track movement. Suddenly, the treadmill was an option! HOT DAMN! I bought an Apple Watch for myself for Christmas (finally a reason to own an Apple Watch, having not actually wanted one at all, why would I want a computer on my wrist?). Trot, trot, trot, walking on the treadmill, hatching eggs and gathering buddy candy, I'm in!

So, I moved my watch. Since I'm happy with my Timex Ironman for actually telling time, I don't need the Apple Watch for anything but Pokémon Go. I want to track movement, so where better than where my movement originates from? Nowhere!

I tucked the watch into my waistband. Strapping it to my ankle and bouncing my leg doesn't record as body movement at all, so this seems to be the best place. And it works.

Whaaa? You don't have a Mr.