Having been visiting a lot with friends over the last month, I've noticed a large number of various lulls in conversations. Some of these lulls are wonderful, usually occurring when we are all in a moment of bliss while we have our first bite of some amazing dish. Others are that awkward uncomfortable silence when a story has ended and no one is able to pick up the thread of the conversation, topic, or idea. We all sit around, looking awkwardly at each other, waiting for someone to say something, tell us a story.

That "tell us a story" gets me every time.

Because here's the thing: if you don't do anything, you have no stories to tell.

Some people are reluctant to have adventures. They don't do. They have high inertia, are more likely to do nothing than something, and have no stories to tell. Having no stories to tell is significantly different than having a story the people around you don't want to hear, even if they feel the same to the story teller ("why tell a story if no one is listening?").

The doing part doesn't have to be a six week trek to Mount Everest. The doing can be as small as noticing a friend has a new chin-up bar and asking, "Do you think you can hang for 30 seconds?" instead of noticing and ignoring it. The doing can be as small as asking, "Oh, the nineties. Would you do them over again, given the chance?" and enjoying the discussion around the hows of experiencing the nineties again. The doing can be seeing someone do pull-ups on a gate entrance on the way into a park, and deciding to do pull-ups on the way out of the park, instead of walking through the gate and having no story.

Having a story means having lived life.

And that's a good thing.

So, here's a story: there's a park a kilometer up the road from us. I thought walking up the hill to the park would be a fun hike. So, J and I went outside and I turned left as he turned right, and wait, what hill? That one? The road leading to the hill I wanted to climb is windy with shoulders that go from 0" to maybe 24", which really isn't a big enough shoulder to walk along, but the park at the top of the hill looked good on paper, so J said fine and followed me as I crossed the busy street Frogger style, and started walking up the hill.

Until said shoulder went to 0" around a hill. Said hill has cars zooming about 40 miles per hour around said curve, and I just couldn't convince myself that going around this curve, on foot, blind, was a Good Idea™. So we turned back around, much to J's relief.

His relief ended when I crossed over to the other side of the road and started climbing up the hill on the far side of the road. Said hill is declared, signed, and posted Open Space, which means I'm not trespassing, yay! However, there are no paths in said Open Space, and so hiking in said space is... interesting and pretty close to ankle biting. 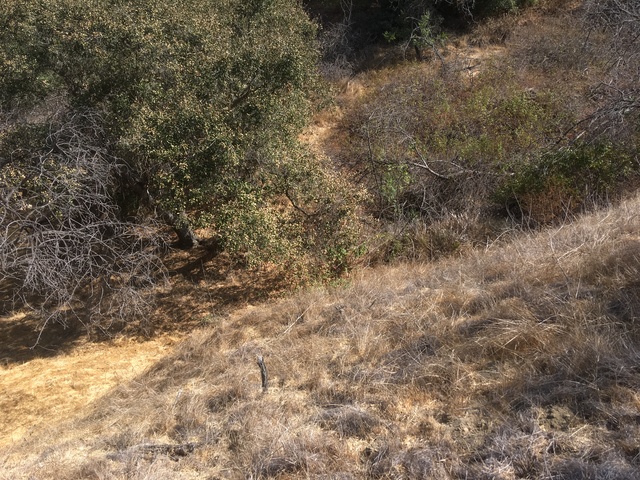 Somehow (no, I still don't know how), I managed to convince J that we should walk along the path that was half way up the hill, along the ridge and down into the road that tops the house we're visiting. Again, looked good on paper. Or in my head.

The path wasn't a person path, more of a deer path. The slope, if one slipped, was a Maim, not a Live, though could be a Die if one doesn't stop the tumble before landing in said curvy road with cars zooming along at 40 miles per hour. The sun was high and hot. The brush loose and unbracing. The path also loose and slipping.

This was CLEARLY a Smith Adventure™. I have no doubt if Mark and Kevin were next to me, the three of us would have continued along that path and had QUITE the story to tell at the end. Instead, common sense prevailed and, done scrambling and convincing myself and J this was a good idea, we turned around and scrambled back down the way we came, ending the journey in a bed of foxtails.

The hills were quite human-adverse, but gave us an Adventure in Doing.

Of note, we found the perfect place to hide a body.

Pretty sure I'm going to get

Pretty sure I'm going to get an earful about this post, because I have Done It Wrong™.

:-* I enjoyed this hike with

:-* I enjoyed this hike with you. I look forward to our next hike.