As is our routine these days when I'm in town, we have dinner together and play some game afterward. I enjoy these evenings a lot, playing cards with Mom and Eric.

We tend to stick to the simpler games, card games with a short game time, often as little as five minutes, rarely longer than 15. We also tend to play the same game for weeks, mostly so that we don't have to adjust what rules are foremost in our heads. Skipbo and Uno are our usual go-to games, if only because of their familiarity. We tried the Uno sibling game Duo, but didn't really like the additional complexity.

Well, last week I picked up a deck of Uno Flip, and tonight was a night of the game. 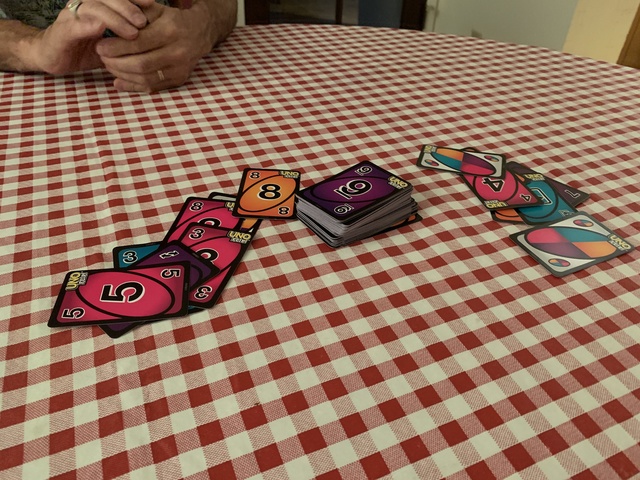 Normally, we'd study the rules, have some sort of discussion about how the game plays, and then start in on the game.

Except, all of us had a drink.

Which meant we dove right in. This game has a "good" side, and a "bad" side. The "good" side has penalty cards that are less onerous than the ones from a normal Uno deck: +1 cards instead of +2, and +2 Wild cards instead of +4. The flip side (hence the name of the game) is the "bad" side, it has +5 cards and a lot of them. It also has a "draw until you draw this color" which ofter results in a 12 card pick-up. There are flip cards that switch which side of the cards (which deck) we play. 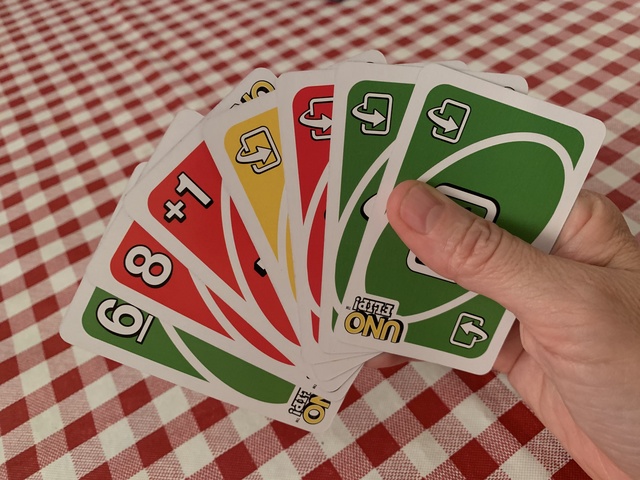 When the "bad" side is played, every one is a jerk in the game. It's hard not to be jerk, possibly impossible.

Compound that with the drinks we were having, and the game quickly devolved into a total game of Asshole. Each time a player dropped a +5 card, someone else muttered, "Asshole." in some entertaining way, and all of us would giggle. A player would call Uno and 3 rounds later have 20+ cards in her hand. Asshole indeed.

Pretty sure this game is going to stick around for a while. At least, until we all decide to stop being Assholes for the 30 minutes we play.