A couple days ago, I walked into the local Safeway and noticed they had two bottles of Nikka Coffey Grain and two bottles of Hibiki Harmony in stock. Well, hot damn, first chance I had, I drove over to the store to buy them out (again, this is how I keep my stock growing, I should probably drink one or the other sooner than later, but hey, "Nikka! Nikka!").

The fridge has been relatively bare, so my plan, which I executed, was to buy a number of cases of canned, bubbly water to put in the fridge for thermal inertia. When I realized the whiskeys were in sets of two, I decided two cases of 12 cans each of lemon and lime water. Good to go. Two bubbly lemon water cases into the cart, two bubbly lime water cases into the cart, head to customer service to ask a clerk to retrieve the whiskeys and, and wait.

This particular Safeway is, uh, lacking in the customer service ethos. Most of the employees seem on auto-pilot, and do the minimum needed to keep their job. I'm not saying all of them, but there's a good number who are flat, and seem really not to want to be there.

Eventually, after catching the eyes of six employees, and having one tell another to help me, a clerk walked over to the liquor cabinet, unlocked it, and asked me which one I wanted. "All of those two, the Hibiki and the Nikka," I said, pointing to the ones on the bottom shelf, locked behind the OTHER door.

The clerk then proceeded to lock the first door, unlock the other door, pull out the bottles, and hand them to me.

Now, this is unusual. Usually, with the locked liquor, the clerk will take the bottles up to the customer service desk, and when I'm at a cashier, will bring them over to the cashier to ring. This has been the way of the locked liquor since as long as I've been buying whiskey at any Safeway (which, admittedly, has been for only a decade or so).

"Thanks for letting me know," she responded, then started ringing the items in. We chatted a little bit as she tallied my items, I asked how her day was going, expressed hope that it was a good day, I let her know I didn't need a bag or help, joked that the total was definitely too much for Apple Pay, and paid for the items. The total seemed low, but, hey, discount for the Club Card AND for buying multiple bottles. Win!

When I arrived home, I started unpacking the liquids I had bought. The water went into the fridge ("hello, thermal inertia!"), and the whiskey went to the table, because something was not... quite... right. The total was nagging me. It seemed too low, $161 for four bottles of whiskey and four cases of bubbly water.

And when I looked at the receipt, I realized my discomfort was correct. It was for four cases of water, and two bottles of whiskey, one of each kind.

I hemmed and hawed at this. I had just unintentionally stolen two bottles of whiskey. But, I hadn't stolen them, the cashier had made an error. But, I know it was an error, even if an honest one, so should I correct it or let it be to my advantage? But, if the store inventory lists a bottle of each of these, will they ever order more of this whiskey I keep buying them out of? But, if I go to pay, will the cashier be punished for an honest mistake, for operating on auto-pilot when ringing up the items? But, if I go to pay, will I be accused of stealing the bottles?

Part of me wanted to keep the bottles and say, "eh, sometimes mistakes go my way!" I mean, enough mistakes don't go my way that I'm annoyed at the world a lot.

After a day, however, the mistake still bugged me, so I went back over to the Safeway when I had a free half hour, to pay for the whiskey.

I went up to the customer service counter, and waited.

Did I mention how difficult being helped at this particular Safeway is?

And gave up. I had plans, this was taking too long, I left.

That was yesterday. I tried again today.

I had an hour this time to spend on paying for this whiskey. Turns out, I needed that full hour. I walked back over to the Safeway and did the same process I had done the day before: I went up to the customer service counter, and waited. This time with receipt out and in hand.

Over the course of the next who-knows-how-long minutes (yes, the process took a while: the scanner wouldn't scan the bar codes; when the scanner did scan the bar codes, the scans weren't accepted by the register; the barcodes were brought to the register and still didn't scan; the liquor department manager was brought over to consult, and eventually we just rang up the items as "liquor" at the correct prices, and were done), the manager said, "Thank you for being honest," not fewer than five times. Dude, you're welcome, but really, I want to sleep at night. Spending this money will help me do that.

Turns out, the liquor inventory is done by sight, not by store computer inventory numbers. The liquor department manager had already ordered replacement bottles. Too bad I won't be in town soon to buy the next bottles when they come in.

Also turns out that the manager never looked at my receipt. I didn't need to worry about the original cashier being punished for failing to ring up the bottles in the first place. This gave me great relief.

In the end, I rewarded myself with a peanut butter cookie from the bakery next door.

Between the cookie and the good sleep I'll have tonight, the aggravation was worth the trouble. 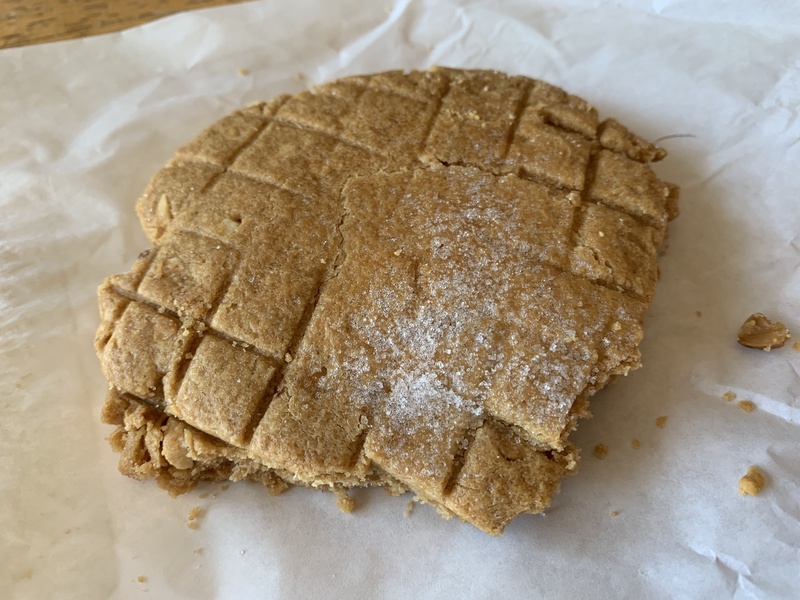