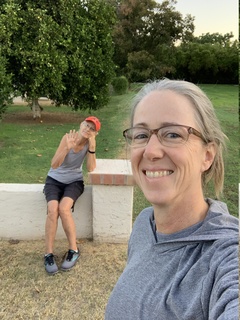 Mom has come out to say good-bye to me as I head off.

She isn't as goofy in this picture as I subsequently convinced her to be.

Say, did I tell you about my adventures three days before the first day of high school at a new school in a new state? I can't find that tale anywhere here, so ... just before high school, I moved from Indiana where I lived with my dad, to Arizona, where I lived with my mom. Three days before the school year starts, at a new high school for me, BJ and I are at Golfland, a water park that was still trying to figure itself out during the summer we had arrived in the state. They had slides that looped around, and two that went, well, not QUITE straight down, but not really not straight down.

These days, park goers go down the slide feet first. With enough swinging on the handholds at the top, you can swing out to some good momentum and lift off the slide on your way down. Most people are able to land gently feet first, as they have experience doing exactly that for most of their lives, landing on their feet.

That summer, however, when we were there, patrons were instructed to go down headfirst, arms straight out in front of them stiffly, don't get too much momentum, absorb the shock with your hands, but don't bend your arms.

BJ went down first. Once he had cleared the bottom of the slide, I went.

Yes, I lifted off the slide.

At 90 pounds soaking wet, lifting off the slide doesn't take much momentum.

So, at the bottom of the slide, I kept my arms straight, landed, washed out to the pool at the bottom of the slide, and looked around for B, who was already out of the pool and on his way to the line for another drop. I followed him out of the pool and started up the line behind him. On the way, my chin itched, so I wiped at it, and kept going. A red spot caught my eye so I looked down.

To see blood all down my white bathing suit.

I felt my chin, looked at my hand, it was bloody, too. B looked over at me and, oh, I hadn't kept my arms straight, I had landed on my chin. Blood wasn't exactly pouring out my face, but it wasn't exactly not flowing quickly. We went back to the lockers, called Mom to pick us up.

After Mom picked us up and dropped off B, she and I went to the emergency room for stitches on my chin. Just before me in line at the emergency room was a three year old who had been paying catch with his dad and fell, landing on his chin. He, too, needed stitches, similar to me. I was fine for the most part, until the kid started screaming in the back. My chin was still numb when I went to the back for stitches, but was nervous nonetheless.

Come Monday morning, first day of school, I had the choice of wearing a band-aid on my chin or having the stitches hang out my chin. I chose the former the first day, the latter the second day, and cut them out before the third day.

I still have the scar.

And, well, here's the place. 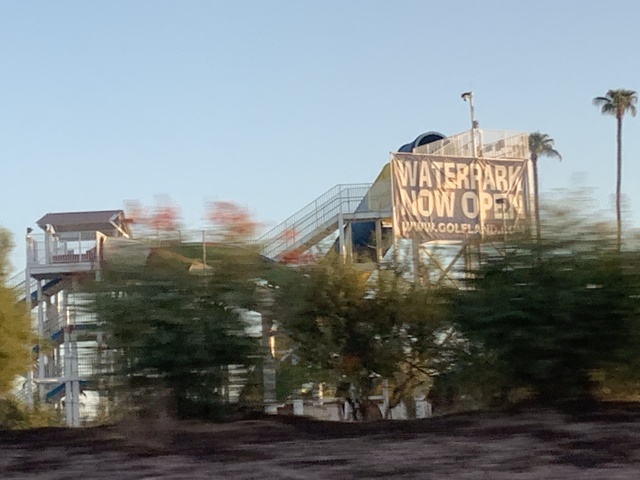 They're open. During a pandemic.