Today was not so great.

I took Chase to the expensive vet today for them to figure out what is wrong with him such that he isn't eating. Yesterday wasn't good, and today didn't appear to be much better, but we were unsure what the vet was going to do, so we didn't encourage any food this morning.

His drop-off appointment was "around" 10am. When arrived "around" 10am, which is to say, I arrived at 10:10am, I was told that the wait was an hour to drop off Chase. I was honestly unsurprised, given cars were double parking in the lot as I arrived, from which I inferred I'd be waiting for a while.

I wasn't expecting as long as I waited, and my original day plans were pretty much shot, but doggo, and what's good, what's bad, who knows...

Eventually Chase fell asleep, on my lap no less. 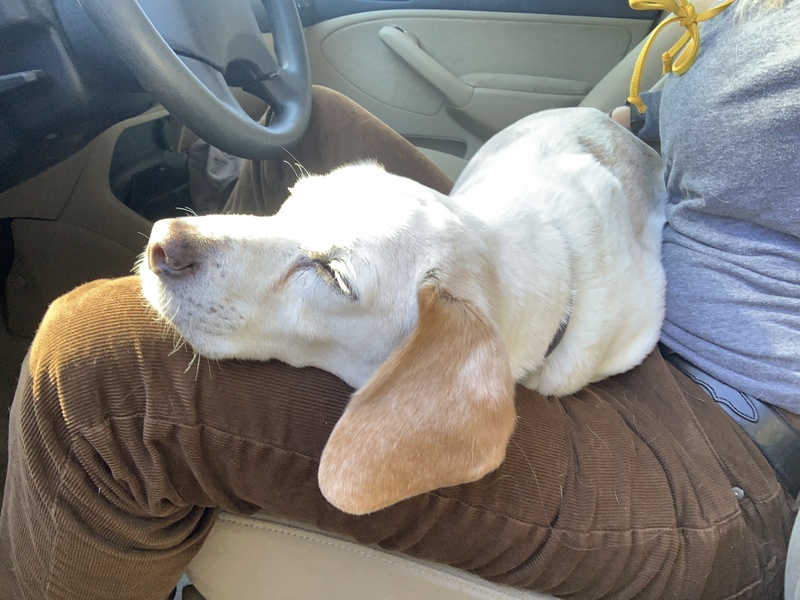 One can see how exhausted he is to have fallen asleep while waiting for the vet.

I managed to make my work meeting, which was okay, but not enough to distract for the rest of the day. With the ongoing knee injuries and honestly low motivation, I managed to stand during the day, along with some shoulder exercises, and not much else for movement or productivity (well, not exactly - managed to hit flow state with a couple bugs and a new feature, so there's that).

Unsure how much not-worrying-about-things-I-cannot-control one can be expected to do in a day in this year of JFC just be better already. My house didn't burn down today at least.

Chase approaches food as if he is interested in eating it, but turns away from the food without eating it.

I'm still convinced this is sore teeth or a stupid foxtail stuck in his throat, and not all the things all the vets keep testing him for.

What a waste of time and money today was. Lots of time, lots of money, and in the end, we are still tasked with tormenting the dog by shoving pills down his throat to force him to be hungry.