Deathless Divide« an older post
a newer one »The Road
Book Notes Yeah, kitt finished writing this at 19:11 on 10 June 2020 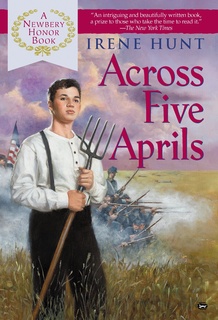 Because I wasn't done reading books I should have read, but didn't, in junior high and high school, nor was I done reading historical war fiction, I picked up this book. Well, that, and because it was recommended as a book that illustrates different aspects of the Civil War (Abe's a babe!). The Killer Angels was also recommended, so both entered into my reading list in the fast track.

The five Aprils of the title are the five Aprils that the Civil War spans. The story opens with an introduction to Jethro Creighton, a white Southern Illinois 9 year old boy who farms a plot of land with his father, brother, three brothers (might have been a cousin in there), and sister. There had been several other siblings in the mix, but death came to at least four that I was paying attention to (illness for three, wagon accident for one). His mother, Ellen, couldn't read, but Jenny, his sister, could. The whole family works the farm in some fashion.

While reading the book, I was struck with how much the book smacks of Early American Stoicism: work needs doing, so do it; life sucks, you carry on; tragedies happen, appreciate the bounties. The book was published in 1964, which makes me wonder if this is more "This is how we think people thought back then," more than "people actually thought this way back then." I had the same question when reading The Little House on the Prairie. Was that really the prevailing mentality? Or are we fictionalizing it the same way Gone with the Wind fictionalized "It was about state's rights!"?

I appreciated how the plot mentioned many of the leaders for both sides in the Civil War. If one has no recollection of the battles fought or the duration of the war, this book is a fine introduction to some of the names. I can't say I recognized very many of the leaders for either side. This book and various animated maps of the troop movements of the American Civil War have helped greatly in reading other American Civil War books. One can appreciate how they all come together.

As the "gentle introduction to the American Civil War," this book is great. It presents, in an easily comprehensible way, the various arguments for the Southern Secession, and puts forth a number of the counter arguments, including the one that f'ing trumps them all: slavery is an abomination that should be wiped from the face of the Earth. The initial character conversations need to be read out loud to be comprehensible, with their being written phonetically instead of being spelled correctly. I argue that contributes to the charm.

Strongly recommended, even if you aren't in junior high school any more.

Jethro was depressed by her somber mood, but not by the imminence of war. He had listened to his brother Tom and their cousin Eb, the two younger of the grown boys in the household, and their excitement had found its way into his blood. Dread of war was a womanly weakness, he had discovered, evidenced by his mother’s melancholy and the tears of Jenny and his brother John’s wife, Nancy.
Page: 7

She had a way of closing her eyes briefly when exasperated as if to reject for at least a second the existence of a folly that she was bound to recognize later.
Page: 7

War meant loud brass music and shining horses ridden by men wearing uniforms finer than any suit in the stores at Newton; it meant men riding like kings, looking neither to the right nor the left, while lesser men in perfect lines strode along with guns across their shoulders, their heads held high like horses with short reins. When the battle thundered and exploded on all sides—well, some men were killed, of course, but the stories of war that Jethro remembered were about the men who had managed to live through the thunder and explosion.
Page: 10

The shot that Travis Burdow fired over Rob Nelson’s team that night was a shot fired at a society that had kicked a boy from childhood on because he bore his grandfather’s name.
Page: 12

“He’s like a man standin’ where two roads meet, Jeth,” she said finally, “and one road is as dark and fearsome as the other; there ain’t a choice between the two, and yet a choice has to be made.” She shook her head. “May the Lord help him,” she whispered. “May the Lord guide his hand.”
Page: 13

Then Ellen’s voice was heard, timid and a little tremulous; farm women didn’t enter often into man-talk of politics or national affairs.
Page: 25

Wilse brought his hand down sharply on the table. “What the South wants is the right to live as it sees fit to live without interference. And it kin live! Do
Page: 25

What about the right and wrong of one man ownin’ the body—and sometimes it looks as if the soul, too—of another man?”
Page: 26

“I’ll say this to you, Cousin John,” he said finally. “I own a few slaves, and if I stood before my Maker alongside one of ’em, I’d hev no way to justify the fact that I was master and he was slave. But leavin’ that final reckonin’ fer the time, let me ask you this: ain’t there been slavery from the beginnin’ of history? Didn’t the men that we give honor to, the men that shaped up the Constitution of our country, didn’t they recognize slavery? Did they see it as a festerin’ hurt?”
Page: 26

“Well then, I’ll ask you this: if tomorrow every slave in the South had his freedom and come up North, would yore abolitionists git the crocodile tears sloshed out of their eyes so they could take the black man by the hand? Would they say, ‘We’ll see that you git good-payin’ work fitted to what you’re able to do—we’ll see that you’re well housed and clothed—we want you to come to our churches and yore children to come to our schools—why, we danged near fergit the difference in the colors of our skins because we air so almighty full of brotherly love!’ Would it be like that in yore northern cities, Cousin John?” “It ain’t like that fer the masses of white people in our northern cities—nor in the southern cities either. And yet, there ain’t a white man, lean-bellied and hopeless as so many of them are, that would change lots with a slave belongin’ to the kindest master in the South.”
Page: 26

“Slavery, I hate. But it is with us, and them that should suffer fer the evil they brought to our shores air long dead. What I want us to answer in this year of 1861 is this, John: does the trouble over slavery come because men’s hearts is purer above the Mason-Dixon line? Or does slavery throw a shadder over greed and keep that greed from showin’ up quite so bare and ugly?” Wilse Graham seemed to leap at Bill’s question. “You’re right, Cousin Bill. It’s greed, not slavery, that’s stirrin’ up this trouble. And as fer human goodness—men’s hearts is jest as black today as in the Roman times
Page: 27

Matt Creighton shook his head. “Human nature ain’t any better one side of a political line than on the
Page: 27

We’re from the South, John; would we want men of their kind tellin’ us how we must live?”
Page: 29

“There’s strong feeling throughout the country,” Shadrach continued. “To open fire because provisions are being brought to hungry men...” “Mister, I’d like to git a word in right here.” Wilse Graham’s voice was strident with anger. “This is exactly what Ol’ Abe’s bin waitin’ fer—jest exactly what he wanted. He’s worked it so the Confederates would fire the first round, and he’s fixed it so they fired on hungry men. Well, fine! Now he kin set back and look pious at the states that has been blowin’ hot and cold.”
Page: 32

“I don’t know if anybody ever ‘wins’ a war, Jeth. I think that the beginnin’s of this war has been fanned by hate till it’s a blaze now; and a blaze kin destroy him that makes it and him that the fire was set to hurt.
Page: 39

“But the South started it, didn’t they, Bill?” “The South and the North and the East and the West—we all started it. The old slavers of other days and the fact‘ry owners of today that need high tariffs to help ’em git rich, and the cotton growers that need slave labor to help ‘em git rich and the new territories and the wild talk—”
Page: 40

When one found comfort, he was grateful, but he was never such a fool as to expect a great deal of it.
Page: 54

“I’m not eager for it either, Jeth, not by a long way. I’ve got a lot of plans for the next forty or fifty years of my life, and being a soldier is not a part of any single one of them.”
Page: 56

“I think a lot of Mr. Lincoln,” he stated in quiet self-defense after a while. “I know you do, Jeth.” “Lots of people don’t. I could name you people in this neighborhood that hate him like poison.” “Not only in this neighborhood—not only in the South, either. It seems that people everywhere are criticizing him. The abolitionists hate him as much as the sympathizers of the South do. People blame him for the mistakes of his generals; and they’re just as bitter about his grammar, his appearance, his family.” Shadrach took a poker and stirred it thoughtfully among the red coals. “I’m not wise enough to measure Mr. Lincoln, Jeth; I just don’t know. But I have a feeling of confidence and faith in him that I can’t always justify. Sometimes I’m angered with him as others are; sometimes I can’t understand him. But somehow my faith in him always comes back.”
Page: 61

[H]e wished with all his heart that he had not meddled in the affairs of a country at war, that he had let Eb work out his own problems, that he, Jethro, were still a sheltered young boy who did the tasks his father set for him and shunned the idea that he dare think for himself.
Page: 160

“But they’re bein’ cheered on, Matt. Congress—the whole country—is happy with ‘em; these boys air goin’ to believe that they be heroes for lootin’ and burnin’, fer laughin’ at distress, fer smashin’ the helpless without pity.
Page: 196

“Don’t expect peace to be a perfect pearl, Jeth,” Ross Milton had warned. “This is a land lying in destruction, physical and spiritual. If the twisted railroads and the burned cities and the fields covered with the bones of dead men— if that were all, we could soon rise out of the destruction. But the hate that burns in old scars, and the thirst for revenge that has distorted men until they should be in straitjackets rather than in high office—these are the things that may make peace a sorry thing....”
Page: 198