Knife« an older post
a newer one »The Chain
Book Notes Instead of being asleep at 16:13 on 15 September 2019, kitt created this: 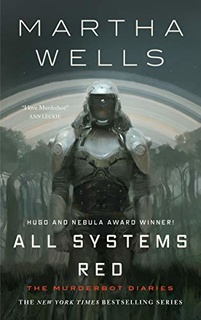 This is book 1 in the MurderBot Diaries, and it is a fun read. I've had it in my to-read pile for a long while now, arriving there from a recommendation on microblog.

I found the book particularly amusing in that Murderbot, who is a construct with mechanical (robot) and organic (human) parts fused together to have essentially a controllable super-human, thoroughly reminded me of an acquaintance I have. Said acquaintance is very literal, doesn't give a shit about most things, is straight-forward about nearly everything, and really just wants to be left alone.

In this first of the series, we have world building, where we understand what the Murderbot is, learn a bit about its history (it went haywire and killed a crew), and come to understand the broad strokes of its personality. It is hard not to sympathize with the Murderbot, even as it is, well, a Murderbot.

Love Wells' writing, and am eagerly anticipating reading the next three books in the series. Strongly recommended (bonus: it's a fast read).

“All right,” she said, and looked at me for what objectively I knew was 2.4 seconds and subjectively about twenty excruciating minutes.
Page 22

It was a low-stress group, they didn’t argue much or antagonize each other for fun, and were fairly restful to be around, as long as they didn’t try to talk or interact with me in any way.
Page 30

I also checked to make sure both the big hopper and the little hopper had their full complement of emergency supplies. I packed them in there myself days ago, but I was mainly checking to make sure the humans hadn’t done anything stupid with them since the last time I checked.
Page 34

WE GOT READY to leave at the beginning of the day cycle, in the morning light,
Page 39

There was a nice box of new ones, but they were useless without the DeltFall HubSystem. Either it was really dead or doing a good imitation of it. I still kept part of my attention on it; if it came up suddenly and reactivated the security cameras, the rules of the game would change abruptly.
Page 68

Nervously, Ratthi said, “What do we do when they come here?” I said, “Be somewhere else.”
Page 93

It may seem weird that Mensah was the only human to think of abandoning the habitat while we waited for the beacon to bring help, but as I said before, these weren’t intrepid galactic explorers. They were people who had been doing a job and suddenly found themselves in a terrible situation.
Page 94

As opposed to the reality, which was that I was one whole confused entity, with no idea what I wanted to do. What I should do. What I needed to do.
Page 102

I’d left one drone in a tree with a long-range view of the habitat, one tucked under the extendable roof over the entrance, and one inside the hub, hidden under a console. They were on the next setting to inert, recording only, so when EvilSurvey scanned, the drones would be buried in the ambient energy readings from the habitat’s environmental system.
Page 109

It’s an elected position, with a limited term. But one of the principles of our home is that our admins must also continue their regular work, whatever it is.
Page 111

I wanted to go alone, but since nobody ever listens to me, Mensah, Pin-Lee, and Ratthi were going, too.
Page 113

It’s one thing to poke a murderbot with a governor module; poking a rogue murderbot is a whole different proposition.
Page 116

He finally said, “You don’t blame humans for what you were forced to do? For what happened to you?” This is why I’m glad I’m not human. They come up with stuff like this. I said, “No. That’s a human thing to do. Constructs aren’t that stupid.”
Page 116