The Wise Man's Fear« an older post
a newer one »The Slow Regard of Silent Things
Book Notes Posted by kitt at 17:19 on 8 January 2017 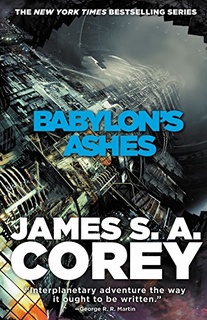 That this book took me a week to finish would have me concerned about my reading speed, except there are so many good parts, so many relevant parts, in it that I'm okay with my reading it slowly. The arc of the book is predictable, the character development is expected, the action is as imagined. What caught me in this book is the wording, the details, the smaller message, and the underlying lesson in the book.

That, and the relevancy of the book to today's politics. If I didn't know any better, I would swear that Daniel Abraham and Ty Franck KNEW how the election would turn out and published the book as a road map to dealing with the aftermath and provide comfort to rational, good people around. There were so many good quotes from the book, so many places where I had to stop reading and just think about what I had just read, that I highly recommend this book. Problem is, to read this book, you kinda need to read the previous five books in the Expanse series (including the one that just pissed me off).

I have been really enjoying the series (minus that one book), so yeah, have to say read it read it read it, but will temper it with, "If you can get through the previous five."

“Because he’s Amos. He’s like a pit bull. You know he could tear your throat out, but he’s loyal to a fault and you just want to hug him.”
Chapter Three: Holden

"... a printed volume of Marcus Aurelius that had belonged to his grandmother. The Meditations were the private thoughts of a person with terrible power—an emperor who could order to death anyone he chose, create the law by speaking it, command any woman to his bed. Or any man, if the mood took him. The thin pages were filled with Aurelius’ private struggle to be a good man despite the frustrations of the world."
Chapter Eight: Dawes

"All through human history, being a moral person and not being pulled into the dramatics and misbehavior of others had caused intelligent people grief."
Chapter Eight: Dawes

"There were bad people everywhere, stupidity and avarice and hubris and pride. And he had to navigate it if there was ever to be hope of a better place for Belters. It"
Chapter Eight: Dawes

“The enemy of my enemy is my friend? That’s bullshit. There are always more than two sides."
Chapter Fifteen: Pa

“I always thought that if you gave people all the information, they’d do the right thing, you know? Not always, maybe, but usually. More often than when they chose to do the wrong thing anyway.”
Chapter Sixteen: Alex

“I thought if you told people facts, they’d draw their conclusions, and because the facts were true, the conclusions mostly would be too. But we don’t run on facts. We run on stories about things."
Chapter Sixteen: Alex

"A bad habit in the back of his head fed him all the wrong things to say: You should ship out with us and I can resign and stay here with you and I’ll come back if you wait for me. All the things that would make her feel better right then in the moment and break her trust in him later. All the things he’d said to women he loved before and not meant then either. She laughed gently, like she’d heard him thinking."
Chapter Thirty-Seven: Alex

"An ancient and barely familiar anticipation shifted in Alex’s chest, like a fragment of childhood beginning of school year."
Chapter Thirty-Seven: Alex

"Pull the trigger. Let’s get this apocalypse on the road.”
Chapter Thirty-Nine: Naomi

"But since we’ve done it, we should do the hell out of it. Better to be decisive and wrong than to let them see us wobble.”

"He tried to feel some sense of victory in it, but mostly it just seemed absurd. The slow zone, the gates, even the merely human ships that had carried them out so far. They were miracles. The universe was filled with mysteries and beauty and awe, and all that they could manage to do with it was this. Chase each other down and see who was the faster draw."

"She was always impatient to help people, even when they weren’t ready to be helped."

"Under the best conditions, disasters and plagues did that. It wasn’t universally true. There would always be hoarders and price gouging, people who closed their doors to refugees and left them freezing and starving. But the impulse to help was there too. To carry a burden together, even if it meant having less for yourself. Humanity had come as far as it had in a haze of war, sickness, violence, and genocide. History was drenched in blood. But it also had cooperation and kindness, generosity,"

“An unshakable faith in humanity.” “It’s true,” he said, shaking his head. Or maybe nuzzling a little. “Against all evidence, I keep thinking the assholes are outliers.”

“What would it mean if you’d dreamed it?”