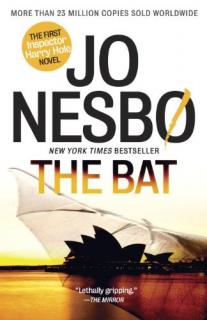 It is the first Harry Hole series. The first Harry Hole I read, turns out, was book five in the series. Which meant, there were four books of character development that I completely missed out on. Which is surprising, given that this book was also in the stack of books from Mom. WHEN AM I GOING TO GET THROUGH THAT STACK? I swear, that woman has defined my reading for this year, and likely next.

So, this book, the first Harry Hole book, actually acknowledges the odd name, though most people in this book pronounce Harry's last name as Holly and Holy.

The book takes place in Sydney, New South Wales, Australia, which I found ABSOLUTELY DELIGHTFUL, as I started reading it when I was in Sydney. It made the story more interesting to me in the way the Harry Bosch series was engaging: I knew the area. I knew what the spaces looked like, I walked along the places, watched people in the different locations. I hadn't really realized how much that connection appeals to me.

This story also gives us a large part of Harry's background, which also made the character more interesting to me.

The plot is that Harry flies to Sydney to look into the death of a Norwegian citizen. Amidst a whole bunch of other deaths, a serial killer is discovered in investigation, and boom, now we have a plot. There were a number of Australian cultural references in the book that went along with the museums that Mom and I were visiting as I was reading the book, that made the story have a stronger impact.

I enjoyed the book, and am looking forward to the other Harry Hole books in the stack from Mom, unlike how I was after the previous Hole crime mystery thriller I read.