The Light Between Oceans« an older post
a newer one »The Moon is a Harsh Mistress
Book Notes kitt decided around 11:30 on 1 January 2018 to publish this: 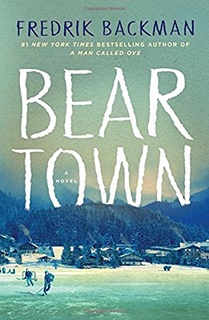 When I started reading this book, I became very excited at its potential to teach me about the passions for hockey that The Art of Fielding taught me about baseball. The beginning of the book was about the passion for the sport, how it can overwhelm you, how great players are obsessive and can never really leave. The book whispers about strength and weakness of the athletes, about coaches and how their decisions can make or break a player, about how a team is more than the sum of its players.

While the book is heavy-handedly, overwhelmingly full of quotable parts, beautiful commentaries about human nature and becoming a better person, I was all-in, enthusiastically looking forward to recommending this book to everyone.

And then the act of violence that is the narrative conflict of the book happens.

Suddenly, the book becomes difficult to read. I didn't read it more slowly, I did read it less enthusiastically. And that's fine. The book isn't REALLY about hockey, it is about human nature. It is about who we believe, about being a better person, about becoming more than we were by our actions.

It's a good book, worth reading.

“Never trust people who don’t have something in their lives that they love beyond all reason.”
Page 3

He was the one who saw the makings of a brilliant coach when everyone else saw a failed player.
Page 33

There are two things that are particularly good at reminding us how old we are: children and sports.
Page 37

We love winners, even though they’re very rarely particularly likeable people. They’re almost always obsessive and selfish and inconsiderate. That doesn’t matter. We forgive them. We like them while they’re winning.
Page 43

Their home is white and precise, an advertisement for right angles. When he’s sure no one’s looking, Benji silently nudges the shoe-rack one inch out of line and touches a couple of the photos on the wall so that they’re hanging ever so slightly crooked,
Page 44

One of the hardest things about getting old is admitting mistakes that it’s too late to put right. The worst thing about having power over other people’s lives is that you sometimes get things wrong.
Page 54

Hockey is a simple sport: when your desire to win is stronger than your fear of losing, you have a chance.
Page 56

All adults have days when we feel completely drained. When we no longer know quite what we spend so much time fighting for, when reality and everyday worries overwhelm us and we wonder how much longer we’re going to be able to carry on. The wonderful thing is that we can all live through far more days like that without breaking than we think. The terrible thing is that we never know exactly how many.
Page 59

You never stop being scared of falling from the top, because when you close your eyes you can still feel the pain from each and every step of the way up.
Page 60

Not a second has passed since she had children without her feeling like a bad mother. For everything. For not understanding, for being impatient, for not knowing everything, not making better packed lunches, for still wanting more out of life than just being a mother.
Page 63

Not that any of this feels the slightest bit better as a result. All he knows is that he keeps disappointing people. Always.
Page 65

“Culture is as much about what we encourage as what we permit.”
Page 66

What was it she said to him? “Have you ever considered not feeling so sorry for yourself?”
Page 67

Her colleague is single to the extreme, whereas Kira is fanatically monogamous. The lone she-wolf and the mother hen, doomed to envy each other.
Page 74

This evening he’ll hold one of his last training sessions with the A-team, and when the season is over he’ll go home and — deep down — will wish what we all wish whenever we leave something: that it’s going to collapse. That nothing will work without us. That we’re indispensible. But nothing will happen, the rink will remain standing, the club will live on.
Page 94

That tendency exists in all sports: parents always think their own expertise increases automatically as their child gets better at something. As if the reverse weren’t actually the case.
Page 132

People sometimes say that sorrow is mental but longing is physical. One is a wound, the other an amputated limb, a withered petal compared to a snapped stem. Anything that grows closely enough to what it loves will eventually share the same roots.
Page 138

“For me, culture is as much about what we encourage as what we actually permit.” David asked what he meant by that, and Sune replied: “That most people don’t do what we tell them to. They do what we let them get away with.”
Page 210

If Peter has learned one thing about human nature during all his years in hockey, it’s that almost everyone regards themselves as a good team player, but that very few indeed understand what that really means. It’s often said that human beings are pack animals, and that thought is so deeply embedded that hardly anyone is prepared to admit that many of us are actually really rubbish at being in groups. That we can’t cooperate, that we’re selfish, or, worst of all, that we’re the sort of people other people just don’t like. So we keep repeating: “I’m a good team player.” Until we believe it ourselves, without actually being prepared to pay the price.
Page 214

She never told him how much that hurt her.
Page 231

No social scientist nor any member of a sports team really knows what makes them who they are, the leaders we follow. Only that we don’t hesitate when we see them.
Page 248

An object in motion wants to keep going in the same direction, and the larger a rolling snowball gets, the more of a fool you have to be to dare to stand in its path.
Page 250

Hate can be a deeply stimulating emotion. The world becomes much easier to understand and much less terrifying if you divide everything and everyone into friends and enemies, we and they, good and evil. The easiest way to unite a group isn’t through love, because love is hard. It makes demands. Hate is simple. So the first thing that happens in a conflict is that we choose a side, because that’s easier than trying to hold two thoughts in our heads at the same time. The second thing that happens is that we seek out facts that confirm what we want to believe—comforting facts, ones that permit life to go on as normal. The third is that we dehumanize our enemy. There are many ways of doing that, but none is easier than taking her name away from her.
Page 273

It doesn’t take long to persuade each other to stop seeing a person as a person. And when enough people are quiet for long enough, a handful of voices can give the impression that everyone is screaming.
Page 273

People were so quick to decide what the truth was that they bought pay-as-you-go phones just to be able to tell her what she is without her knowing who they are.
Page 274

There are damn few things in life that are harder than admitting to yourself that you’re a hypocrite.
Page 293

Because if you love hockey, if you love anything, really, you’d really prefer it to exist inside a bubble, unaffected by anything happening outside. You want there to be one place, one single place, which will always be exactly the same, no matter how much the world outside might change.
Page 294

“What is it with hockey?” the bass player asks.

“What is it with violins?” Benji counters.

“You have to switch off your brain in order to play it. Music is like taking a break from yourself,” the bass player replies.
Page 320

Fighting isn’t hard. It’s the starting and stopping that are hard. Once you’re actually fighting, it happens more or less instinctively. The complicated thing about fighting is daring to throw the first punch, and then, once you’ve won, refraining from throwing that very last one.
Page 343

The love a parent feels for a child is strange. There is a starting point to our love for everyone else, but not this person. This one we have always loved, we loved them before they even existed.
Page 357

“I don’t have any children, David. But do you want to hear my best advice about being a parent?”

Another morning comes. It always does. Time always moves at the same rate, only feelings have different speeds. Every day can mark a whole lifetime or a single heartbeat, depending on who you spend it with.
Page 379

People don’t often say thank you in Beartown. Nor sorry. But this is their way of showing that some people in this town can actually carry more than one thought in their head at the same time. That you can want to punch a man in the face but still refuse to let anyone hurt his children. And that you respect a crazy bitch who walks in here without being afraid. No matter who she is.
Page 391