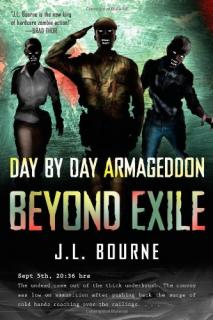 Okay, having finished the first book of, well, apparently a three book series, I went ahead and read the reviews of the next two books. The ending of the first book was so stunningly unsatisfying that I was nearly jumping at the chance to read the next book, Beyond Exile, to have some closure. So, I bought the next book.

Many of the annoying things with the previous book had been worked out by the time the author was writing this one. The jarring history that shouldn't exist in one's journal because the knowledge is assumed, is gone. We are on the journey with the narrator, so experience his life with him.

The story continues exactly where the previous one left off. There's a helicopter crash and the narrator has to travel by foot for about 300 miles through zombie-infested backcountry to return home. He receives some unexpected aid, meets another journeying-solo man, and discovers some fantastic technology.

We also learn the source of the zombie in this universe. While I appreciated the closure, the particular suggestion is eye-rolling, which makes me giggle, given how preposterous the idea of zombie-ism is in the first place. That I'm willing to think, "okay, this scientific explanation for why dead people continue to function and crave living flesh," but, "this explanation isn't valid" is amusement-inducing.

I enjoyed this book more than the previous one. Yay for the narrator. Boo for bureaucracy.