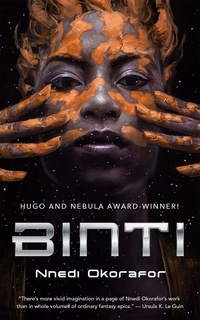 I have had this book, and its two sequels, on my to-read list for a long while now. I recall seeing it on Martha and Chookie's door bench and commenting that I wanted to read it. Martha was enthusiastic about it, as was Sonja, resulting in my increased anticipation for reading it.

In Binti, we have the introduction of a girl / teen / young woman making a choice between what her society and family wants and expects her to be, and who she wants to become. She made a choice (decided to go to university), decided to start down the path to a life she chose, only to be sideswiped by circumstances so far outside of her control and history and experience that even her survival would be legend.

The book is a fast read, maybe an hour. The shortness doesn't make it any less worthwhile. The book is definitely worth reading.

The shuttle began to move and I stared until I couldn’t see it anymore. “What am I doing?” I whispered.
Page 12

My father didn’t believe in war. He said war was evil, but if it came he would revel in it like sand in a storm. Then he’d say a little prayer to the Seven to keep war away and then another prayer to seal his words.
Page 16

Those women talked about me, the men probably did too. But none of them knew what I had, where I was going, who I was. Let them gossip and judge. Thankfully, they knew not to touch my hair again. I don’t like war either.
Page 17

So me being the only one on the ship was not that surprising. However, just because something isn’t surprising doesn’t mean it’s easy to deal with.
Page 21

Imagine what it meant to go there as one of that 5 percent; to be with others obsessed with knowledge, creation, and discovery.
Page 28

But deep down inside me, I wanted . . . I needed it. I couldn’t help but act on it. The urge was so strong that it was mathematical.
Page 29

I’d read that Meduse could not move through walls, but even I knew that just because information was in a book didn’t make it true.
Page 34

I wanted to ask, “Why did you let this happen?” but that was blasphemy. You never ask why. It was not a question for you to ask.
Page 35

They say that when faced with a fight you cannot win, you can never predict what you will do next. But I’d always known I’d fight until I was killed. It was an abomination to commit suicide or to give up your life. I was sure that I was ready.
Page 37

The chefs on the ship fed these fish well and allowed them to grow strong and mate copiously. Then they lulled the fish into a sleep that the fish never woke from and slow cooked their flesh long enough for flavor and short enough to maintain texture.
Page 51

The first thing I noticed was the smell and weight of the air when I walked off the ship. It smelled jungly, green, heavy with leaves. The air was full of water.
Page 73

Several of the human professors looked at each other and chuckled. One of the large insectile people clicked its mandibles. I frowned, flaring my nostrils. It was the first time I’d received treatment similar to the way my people were treated on Earth by the Khoush. In a way, this set me at ease. People were people, everywhere. These professors were just like anyone else.
Page 75