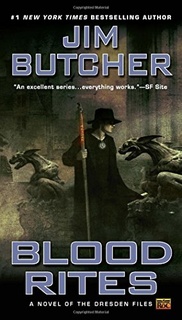 Yep, rereading the Dresden series. This is Book Six

We do get a lot of background in the story, and a bit of foreshadowing on a number of future plot plots, which is great. We meet Laura Raith, thanks to Thomas. And Mouse! Oh boy, scads of flying, flaming poo. That's a visual for the ages.

This book ranks as a fan level recommendation. It's about Harry, I'm going to read it (whether Dresden, Potter, or Hole, let's admit it).

Human violence was at its most hideous when a woman was on the receiving end, and supernatural predators were even worse.
Location 1424

“Trite but true—you don’t know what you have until it’s gone. People change. The world changes. And sooner or later you lose people you care about. If you don’t mind some advice from someone who doesn’t know much about families, I can tell you this: Don’t take yours for granted. It might feel like all of them will always be there. But they won’t.”
Location 1723

I had to be paranoid, which in this instance was another word for smart.
Location 2735

Sooner or later I’d be old and frail, maybe even tired of living. And dying. I would have no one to share it with me, or hold my hand when I was afraid.
Location 3469

for the first time I heard something like real anger in his voice. That was something to be noted. When kind men grow angry, things are about to change.
Location 3746

“I wouldn’t be betting my life on it otherwise. You’ve got my back, Murph. Shut up and dance.”
Location 4738

But several years of staring out at the darkness had showed her that the law was both blind and deaf to some of the nastier parts of the world. She’d seen things that moved in the shadows, perverting the purpose of the law to use it as a weapon against the people she had sworn to defend. Her faith had taken a beating, or she wouldn’t even have considered stepping outside the boundaries of her authority. And she knew it.
Location 4759

That knowledge cost her dearly. There weren’t any tears in her eyes, but I knew that they were there, on the inside, while she mourned the death of her faith.
Location 4762

“I don’t know the right thing to do,” she said. “Neither do I,” I said. “But someone has to do something. And we’re the only ones around. Either we choose to take a stand now or we choose to stand around at all the funerals regretting it later.”
Location 4764

That the power born into any wizard carried with it the responsibility to use it to help his fellow man. That there were things worth protecting, defending, and that the world could be more than a jungle where the strong thrived and the weak were devoured.
Location 4905

“For the record,” Kincaid said, “I was hoping for an answer that vaguely hinted at a specific tactical doctrine rather than spouting off general campaign objectives.”
Location 4927

An angel, blazing with fury and savage strength, spun toward the Renfield, her eyes shining with azure flame, a shaft of fire in her hands. The angel was dressed in soiled robes smudged with smoke and blood and filth, no longer white. She bled from half a dozen wounds, and moved as if in terrible pain. Murphy.
Location 5052

The world might be vicious and treacherous and deadly, but it couldn’t kill laughter. Laughter, like love, has power to survive the worst things life has to offer. And to do it with style.
Location 5932

“It is, after all, a great deal more pleasurable to conquer than to rule. And defiant women can be conquered again and again before they break.”
Location 6408

I had started feeling a little crowded already, sure. But I took a deep breath and brushed it back. Thomas wouldn’t be here too long, and the dog was certainly a lot smaller than Mister. I could handle a little claustrophobia.
Location 7246