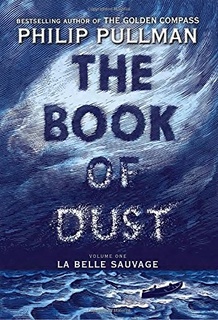 I hadn't realized Philip Pullman had a new book out until I, quite by accident, listened to his interview on NPR. I haven't been listening to NPR much recently, so catching the interview was quite delightful. In it, Pullman mentioned that he had felt the story wanting to come out (or some variation of that feeling), after he had finished Lyra's tale.

Well, I enjoyed the His Dark Materials series, so purchased this book and was delighted when it came up on my reading queue. I had set it back down again a while ago, but picked it back up this week and zipped through it.

I enjoyed Malcolm's story. I enjoyed how one can read the foreshadowing from this book for events happening in His Dark Materials. I enjoyed the subtle character development.

I didn't really enjoy the Deux ex Machina moments, nor some of the more exaggerated plot elements, but I can see how they might be necessary in order to introduce certain characters or provide motivations in later books. I'm speaking of the sewer rescue in particular here.

I don't know if this book stands on its own, as I've read it after His Dark Materials. I did, however, enjoy it, so recommended if you're a Pullman fan.

“Those parcels. How d’you make ’em so neat?”

He didn’t mind; this was a sort of game they had. “I thought ‘neat’ was all right,” he said.

“It depends on whether you want the idea of neatness to modify the act of tying the parcel, or the parcel itself, once tied.”
Location 121

There were two or three commercial subscription libraries in Oxford, but no free public library, and Malcolm wouldn’t be the only young person whose hunger for books had to go unsatisfied.
Location 1266

How awful, a world without free access to books.

“It shouldn’t be about how we feel — guilty, feeble —”

“No, and it isn’t. It’s about wrong and less wrong. Bad and less bad. This is about as good a cover as anyone could find. Leave it at that.”
Location 1278

He hadn’t changed much, of course, and Malcolm found that if he asked the right questions, Eric would tell him things that were supposed to be secret, because the pleasure of knowing secrets was doubled by telling them to people.
Location 1956

“Did you seriously think for one moment,” she said, sounding fierce now, “that I would let this little baby, who has been given into our care, be taken away by three strangers on the strength of a single piece of paper?

Three men who practically forced their way into this holy building without any invitation? Who frightened the oldest and the least well of us with threats and weapons—yes, weapons—waving your guns in her face? Who do you think you are? What do you think this place is? The sisters have been giving care and hospitality here for eight hundred years.

Think what that means. Am I going to abandon all our holy obligations because three bullies in uniform come shouldering their way in and try to frighten us? And for a helpless baby not six months old? Now go. Get out and don’t come back.”
Location 2153

And it was very slowly getting bigger. It wasn’t a spot anymore. It was a line: a curved line, like a loosely scribbled letter C, and it was sparkling and flickering in a zigzag pattern of blacks and whites and silvers.
Location 2196

When I read this, my first thought was, "Welcome to migraines, kid." Turns out, slightly later in the book, I was right. What I don't know, however, is why this was brought into the story.

The steamy, noisy kitchen was the safest place in the world, it seemed to him. Safety had never been anything to think about before; it was something you took for granted, like his mother’s endless, effortless, generous food, and the fact that there would always be hot plates ready to serve it on.
Location 2402

He sat back, feeling slightly dizzy. Her familiar room was warm, the chair was comfortable, the plate of biscuits was to hand. He felt as if this was the place where he was truly at home, more so than his mother’s kitchen or his own bedroom, and he knew he would never say that to anyone but Asta.
Location 2675

Again with the comfort of mothers. Universal.

He stopped. The circle in the diagram, divided into its little sections, reminded him of something.

“It’s sort of like something I saw….” He described the spangled ring that he’d seen on the night Lord Asriel had come to the Trout. She was interested at once.

“That sounds like a migraine aura,” she said. “Do you have bad headaches?”

“Are the gyptians against the CCD, then?”

In the increasingly tribal society we stratify into, remembering this is important.

He sat there happily with his parents, thinking of nothing, content with the warmth and the smell of frying food.
Location 2908

"This is a deep and uncomfortable paradox, which will not have escaped you: we can only defend democracy by being undemocratic."
Location 3187

“Yes, it is,” he said. “War asks many people to do unreasonable things. And make no mistake, we are at war.
Location 3223

Asta sleepily nipped Malcolm’s ear, and he came awake like someone struggling to swim to the surface of a lake of laudanum, where the strongest delights were the deepest and there was nothing above but cold and fear and duty.
Location 5008

This describes waking pretty well to me. Another really good description of waking up is in Pet Sematary, where waking up is an effort to claw oneself up from being six feet under to reach the air.

I CANNOT STAND THIS BEHAVIOR. Don't tell met to come look at something, just fucking tell me what is going on.

“What’s the matter? Why are you angry?”

“Everything. What d’you think?”

He shrugged. There was nothing he could do about everything. He didn’t want to argue.
Location 6435

He could still do simple, everyday things, then. He hadn’t lost the power to live from second to second and to take pleasure, even, in the warm yellow light that filled the canoe.
Location 6509