Do Not Disturb« an older post
a newer one »Conspiracy
Book Notes Written with a loving hand by kitt some time around 20:32 on 17 March 2018 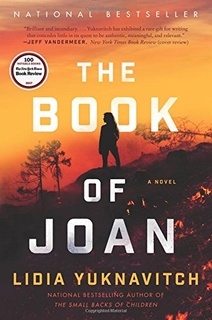 Warren Ellis has a weekly newsletter, in which he talks about writing, reading, and things of interest to him. In last week's episode, we found our intrepid hero talking about The Book Of Joan in a way that sounded fairly interesting, so I looked for it in the library.

And there it was!

Well, if this isn't the world telling me to read this book, I don't know what is. Okay, maybe the world is telling me this book isn't in high demand, or that it was at one point and the library has excess copies.

Anyway. Ellis' book description is much better than I would have done. It reads differently than I expected the book to read, but his description is spot on. The way Yuknavitch weaves history into the story (uses history as a template?) is just wonderful.

Trying to figure out where I put it on my scale, it's definitely "fan" or above, but would I recommend it to a friend? It was interesting, so I'd have to say it is worth reading.

How’s that for a cosmic joke of the ruling class? The meek really did inherit the Earth. And the wealthy suck at it like a tit. There’s no telling how many meek are left.
Page 6

And anyway, I’ve got that gnawing human compulsion to tell what happened.
Page 9

No one on Earth was ever literally white. But that construct kept race and class wars and myths alive.
Page 11

Everything in a life has more than one story layer. Like skin does: epidermis, dermis, subcutaneous or hypodermis. My history has a subtext.
Page 12

We are what happens when the seemingly unthinkable celebrity rises to power. Our existence makes my eyes hurt.
Page 14

People are forever thinking that the unthinkable can’t happen. If it doesn’t exist in thought, then it can’t exist in life. And then, in the blink of an eye, in a moment of danger, a figure who takes power from our weak desires and failures emerges like a rib from sand.
Page 14

We consume and become exactly what we create. In all times.
Page 14

Men are among the loneliest creatures. They lose their mothers and cannot carry children, and have nothing to comfort themselves with but their vestigial cockular appendages.
Page 17

This is perhaps the reason they move ever warward when they are not moving fuckward.
Page 18

But people will make belief out of anything, especially if it comes with a good story, and despite my cynicism and age, I want to believe in her. Like the way old people on Earth used to turn to a story we made called god.
Page 19

But not all legend becomes history, and not all literature deserves to become legend.
Page 20

His voice and words make my whole body ring. He makes me laugh. Sometimes I think that’s the deepest love of all.
Page 30

There is no place to hide or run to in a closed system.
Page 34

I don’t care which careful slice of history you choose to cling to, there is no part of being human that does not include the death spectacle: the resort to killing, through war or “justice” or revenge.
Page 41

The fastest way to drive living beings mad, then as today, is to confine them to a small, stimulus-less place and deprive them of any interaction with their species.
Page 42

Maybe we were always meant to come to this part of our own story, where the things we thought we created were revealed to have been within us all along, our brains simply waiting for us to recognize the corresponding forms of space and technology “out there” that we dumbly misread as distinctly human organs.
Page 44

Joan took her T-shirt off. Her jeans. “You’re gonna freeze your ass off!” Her brother laughed, but his clothes came off, too. They were siblings, after all.
Page 58

There wasn’t time to educate the children. As in medieval times, and during other world wars, children simply had to learn to live within the miasma of violence. Pick up this weapon. Don’t think. Act.
Page 74

When the first nuclear drone attacks erupted, for a while, and counterpart drones returned fire, the War was waged almost without soldiers. But all agon eventually reduces itself to human violence. It was almost as if humans couldn’t bear their distance from the killing. The drama. The theater of war.
Page 76

The rhetoric of protecting children from war, shielding those most vulnerable from our most horrific truths, was always a hypocrisy designed to protect the illusions that adults carry that we care more about our children than we do about ourselves, until finally that pretense, too, fell.
Page 76

To be human, the film suggested, was to step into the full flurry and motion of all humanity: to bear the weight of circumstances without flinching, to surrender to the crucible—to admit that history was not something in the past but something you consciously step into. Living a life meant knowing you might be killed instantly, like one who wanders into the path of a runaway train.
Page 82

Inside of war, or dream, or memory, a warrior emerges.
Page 83

If we look at history—those of us who study it, who can remember it—we understand the reason why those who come to power swiftly, amid extreme national crises, are so dangerous: during such crises, we all turn into children aching for a good father. And the truth is, in our fear and despair, we’ll take any father. Even if his furor is dangerous. It’s as if humans can’t understand how to function without a father.
Page 99

But Joan knew one thing we never learned: to end war meant to end its maker, to marry creation and destruction rather than hold them in false opposition.
Page 105

Terrorists, she thought, laughing inside. When they own languages, she thought, we are terrorists. When we own them, we are revolutionaries. People who turn over the earth.
Page 107

On his side, there lived a hatred for what humanity represented with its diversities and differences, and his pathological desire to abandon the planet, to re-create humankind in a different image. His own.
Page 108

On her side, there was a hatred there, too, if she was being honest with herself: for what we had made of ourselves, for the fictions we consistently chose that forced our own undoing; for our fear of otherness; for our inability to conquer ego, our seemingly tsunami-like thirst for never-ending consumption at the price of the planet.
Page 108

Once there was a girl from France. She heard a song and became a warrior for her country, but her country lost its shape and aim in the Wars, as all countries did, and then there were just combatants and civilians, and then just civilians gone brutal against one another, endless violence. Then the girl made a choice.
Page 116

In the dark, a person’s shadow is nothing. Like the past losing its light.
Page 121

She didn’t believe him, but she did believe in letting him have his story. To have a story was to have a self.
Page 128

In death, adults reveal some of their childhood selves. The eyes and cheek muscles going slack, back in time to a face without history.
Page 178

It isn’t that love died. It’s that we storied it poorly. We tried too hard to contain it and make it something to have and to hold.
Page 192

Love was never meant to be less than electrical impulse and the energy of matter, but that was no small thing.
Page 192

The stuff of life itself. Life in the universe, cosmic or as small as an atom. But we wanted it to be ours. Between us. For us. We made it small and private so that we’d be above all other living things.
Page 192

At the heart of torture there is a brutality beyond inflicting pain. It is the brutality of stealing an identity, a sense of self, a soul. The pain-wracked body is only a symbol of a deeper struggle that is bodiless. It is the struggle to be. Not just to cling to consciousness, but a kind of radical compassion to exist as a self in relation to others. The torturer attempts to murder that desire for compassionate relationship. To erase even its possibility. The tortured body is the opposite of the newborn. Instead of a will toward life and the stretch to bond with an other, there is a brutal will toward death and the end of that longing. When torture succeeds, that is.
ree > Page

To be human. What if being human did not mean to discover, to conquer. What if it meant rejoining everything we are made from.
x > Page

"One life is all we have, and we live it as we believe in living it. But to sacrifice what you are, and to live without belief—that is a fate more terrible than dying."
ven > Page

Always crying. It has become a state of being rather than an emotionally isolated experience.
o > Page