George Carlin Reads To You« an older post
a newer one »Dead Mountaineer's Inn
Book Notes Posted by kitt at 21:19 on 9 April 2017 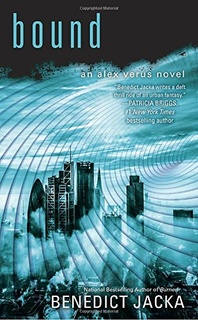 This is book 8 of the Alex Verus series.

The latest in the Alex Verus series, I have to say, I am really delighted that Jacka doesn't make us wait two years between books. Nor does he wait so long that re-reading the previous book is necessary to remember where one is in Verus' life saga.

As with previous books, the book is action packed. There is small bit of Verus' wallowing in "I have caused all of this anguish on my friends" guilt, but much of it is followed with the realization that, "Hey, my friends are adults, they can make their own choices," which, let's be honest, makes life much better. That whole respect thing.

We see the return of Drakh, along with his various compatriots and expected manueverings. We also see the various parts of Verus' life fold back in on itself, with different parts of previous books woven into the current plot. I really like when that happends. Jordan did that a lot with the Wheel of Time series; and I'm discovering how much Butcher has done that with my recent rereadings of the Dresden series. It's like a beautiful long con being exposed.

Of course the book is full of action. I keep expecting Jacka to pull a Martin and kill off a main character or something. He nearly does, but, well, won't the series be a shock when he does (Jacka, god, man, please don't). The la-la-la-the-hero-will-survive aspects make the series a fun read, of COURSE Verus will pull through. Except he doesn't in the way we expect. Which is great, of course.

There are four basic responses to a threat. Fight, flee, deceive, submit.
Page 36

Those are all important, but they’re reactive. I deal with them, but once I’ve dealt with them, then all that does is make the problem go away. It doesn’t make things any better.” “And what would make things better?”
Page 66

“First and foremost is self-knowledge. Understanding who you are and what you can do. Recognising when you are being influenced. Knowing when to walk away.”
Page 71

“You told me that you woke up one morning and couldn’t think of any reason to get out of bed,” I said. “And you decided that you needed to find someone who could help. Because if you didn’t change something, then one day you’d just stop getting out of bed altogether.”
Page 82

“Then what do you want to do?” Luna shrugged helplessly. “Okay,” I said. “Then the first thing you’re going to have to do is answer that question.” “How?”
Page 83

“Because everyone’s got their limits,” I said at last. “The one thing they just won’t do.”
Page 118

Probably my biggest surprise in the five months I’d spent working for Morden had been coming to realise that he wasn’t actually a bad boss. He was ruthless with any challenges to his authority, but as long as I didn’t do that, he was fairly easygoing. He didn’t threaten or bully, or give me pointless tasks just for the sake of it. Oddest of all, he actually seemed willing to listen. He’d rarely change his plans based on my input, but he did pay attention, and if I didn’t understand what he was doing, then he’d take the time to fill me in.
Page 136

When you’re surrounded week in, week out by people constantly lumping you in with a particular group, it’s hard not to start thinking of that group as “your side” and the others as “their side.”
Page 136

“If you write down someone’s life, do they live forever?”
Page 192

Now that I look back on the whole thing, I wonder if there was anything I could have done. Maybe there was, but it’s a lot easier to see warning signs in hindsight.
Page 209

“The powerful and the great can be as petty as anyone else,”
Page 235

They would have had to genuinely care for the jinn they were dealing with. Inner nature isn’t so malleable.”
Page 239

“If you’re competent, then violence is your first option and last resort.”
Page 245

Every now and then you wind up in a situation that calls for violence, and when that happens, you need to know what you’re doing. But even if you live an especially dangerous life—which, to be fair, Luna and I do—all of those times put together are going to average to less than twenty-four hours per year. The other ninety-nine-point-something percent of the time you’re going to spend doing something else. And if you try to solve problems with violence when you don’t need to, it really doesn’t take long before you turn into the kind of person other people are worried about protecting against.
Page 245

Everything changes. Pick any constant about your life and wait long enough, and it’ll be different. We all know that, but for some reason, it’s a hard lesson to remember. I suppose it’s because to do anything, we have to assume that things won’t change—you can’t make plans without assuming a certain degree of permanence. And for the most part, that assumption turns out to be true. Until it isn’t.
Page 248

But one of the things I’ve noticed as I’ve grown older is that while everything changes, the change usually isn’t obvious. Sometimes that’s because the change is so slow and gradual. A pair of shoes wears out, a person ages, the tree outside your window grows; every day it’s different, but in such tiny increments that you never notice.
Page 248

When you know what’s relevant and what you can ignore, then everything is obvious, but it’s not so obvious when you’re caught up in surviving from day to day. At least until life reaches out and smacks you over the head.
Page 249

The city’s a busy place, and if you wait for people to notice your problems, you’ll be waiting a long time. You want to fix your life, you have to do it yourself.
Page 253