The Curious Incident of the Dog in the Night-Time« an older post
a newer one »Anne of Green Gables
Book Notes Written with a loving hand by kitt some time around 17:45 on 10 November 2017 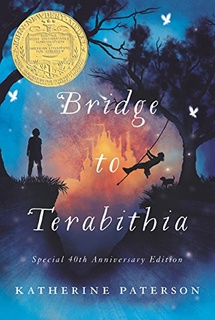 For reasons I haven't quite figured out, I decided not long ago to fill in the gaps in my young adult life's reading choices, and read a number of "classic" children's (young adult these days) books. Since I had a travel day today, and finished up the other book I was reading, and not wanting to read any of my already started books, I picked up Bridge to Terabithia.

And finished it today, too. Go me.

This isn't an unknown book for people of a certain age. The author's son was able to make it into a movie, which increased its exposure. The book is banned from many schools because, for some reason that is completely incomprehensible to me, some parents believe hiding death from a kid is a Good Thing™. Of note, it is NOT a Good Thing™. It is actively a Bad Thing™. Death is a part of life, and accepting that sooner than later makes the life part of this cycle a better experience, more sweeter, more cherished, more worthy.

Reading this book, I knew one of the two main kids died. I wasn't sure which one, nor was I sure of the circumstances. That the story is based (broad strokes) on the author's son's childhood experience makes this story more sad. When should a parent ever outlive her child? Okay, if the child is evil, fine, yes. Exceptional case.

As I knew the climax of the plot, I wasn't overwhelmed when it happened. That, and I was heading to an event with a lot of people I don't know, meant my desire not to cry unabashedly was stronger. I didn't cry, but I did feel that loss, and that numbness after the loss.

A book worth reading at some point in a person's life. Unsure when would be a good time, to be honest.

The parents being as good as they can be, but not perfect, was consistent with with the previous book, which made it a two book trend, amusing me somewhat. What? people aren't perfect? And we hear them yelling at their kids? Huh. Real Life™

Quotes from the book:

His straw-colored hair flapped hard against his forehead, and his arms and legs flew out every which way. He had never learned to run properly, but he was long-legged for a ten year-old, and no one had more grit than he.

Because grit was important, even back in the 1970s.

Miss Edmunds would play her guitar and let the kids take turns on the autoharp, the triangles, cymbals, tambourines, and bongo drum. Lord, could they ever make a racket!

Okay, I'm laughing now, because I remember the autoharp, triangles, and making a racket in music class.

All the teachers hated Fridays. And a lot of the kids pretended to. But Jess knew what fakes they were. Sniffing "hippie" and "peacenik" even though the Vietnam War was over and it was supposed to be OK again to like peace, the kids would make fun of Miss Edmunds' lack of lipstick or the cut of her jeans.

Okay to like peace. What a f'd up world we live in that peace wouldn't be okay to like.

She punched him in the shoulder. "Let's go out and find some giants or walking dead to fight. I'm sick of Janice Avery."

OMG I had no idea that "Walking Dead" was a phrase that's forty some years old!

He helped May Belle wrap her wretched little gifts and even sang "Santa Claus Is Coming to Town" with her and Joyce Ann. Then Joyce Ann cried because they had no fireplace and Santa wouldn't be able to find the way, and suddenly he felt sorry for her going to Millsburg Plaza and seeing all those things and hoping that some guy in a red suit would give her all her dreams.

The longing of a little kid, that longing that never goes away.

"That whole Jesus thing is really interesting, isn't it?"

"All those people wanting to kill him when he hadn't done anything to hurt them." She hesitated. "It's really kind of a beautiful story-like Abraham Lincoln or Socrates -- or Aslan."

And yet another testiment to the horror in human nature.

He wondered what it would be like to have a mother whose stories were inside her head instead of marching across the television screen all day long.

A commentary on television from the 1970s, imagine what it would be like to have a life that wasn't about consuming but about producing. It is quite wonderful, tbh.

You think it's so great to die and make everyone cry and carry on. Well, it ain't.

Leslie had died, and Jess was angry at her.

He, Jess, was the only one who really cared for Leslie. But Leslie had failed him. She went and died just when he needed her the most. She went and left him. She went swinging on that rope just to show him that she was no coward. So there, Jess Aarons. She was probably somewhere fight now laughing at him. Making fun of him like he was Mrs. Myers. She had tricked him. She had made him leave his old self behind and come into her world, and then before he was really at home in it but too late to go back, she had left him stranded there like an astronaut wandering about on the moon. Alone.

And this is where I did allow myself to cry a bit.

"Everybody gets seared sometimes, May Belle. You don't have to be ashamed." He saw a flash of Leslie's eyes as she was going in to the girls' room to see Janice Avery. "Everybody gets scared."

She looked at him in disbelief. "But you weren't scared."

"You're just saying that."

Sometimes like the Barbie doll you need to give people something that's for them, not just something that makes you feel good giving it.