A Killer Harvest« an older post
a newer one »Lethal White
Book Notes Written with a loving hand by kitt some time around 18:10 on 11 December 2018 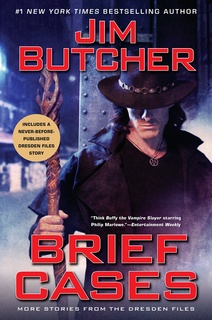 This is a collection of Harry Dresden short stories, collected into one volume. Usually the stories are part of a science-fiction-fantasy anthology written by many authors, of which a Dresden will be one of many in the book. I used to buy these anthologies for the Dresden story, until I realize if I wait long enough, a compendium of Dresden shorts will be assembled and published, and THAT was what I really wanted.

Though now that I'm using the library more, I could probably borrow the anthologies...

I had read many of these short stories before, mostly in the Big Foot collection. There were, however, a few I hadn't read. I enjoyed the Molly tales, especially the one where she earned her svartalf apartment. Molly's thinking voice, however, while a bit too male, and a lot too Dresden, is still quite enjoyable to read.

The book is a must for any Dresden fan, and would make little sense to anyone else.

And pretty sure I missed a bunch of my highlighted quotes, what, reading on a broken kindle and such.

Carlos squinted his eyes and studied the bartender, as if weighing the value of heeding her words versus the personal pleasure he would take in being contrary. Harry Dresden has had a horrible influence on far too many people, and has much to answer for.
Page 288

“Knights of the Cross never have any missions they question?” Carlos asked.

“I think they get a different kind of question,” I said. “For Dad, it was always about saving everyone. Not just the victims. He had to try for the monsters, too.”

“Not so weird,” I said. “Maybe if someone had offered a hand to the monsters, they wouldn’t have become monsters in the first place. You know?”
Page 305

“Once we get these kids clear, I want to kiss you again.” My tummy did a little happy cartwheel, and my heart sped up to keep it company.
Page 307

“I haven’t kept track,” I said. “Somewhere between zero and none. Should I have?”
Page 308

But, again, when casting a wizard as the central character, from a storytelling standpoint all of that power is a liability, not an asset. Protagonists have to be challenged, struggle, and grow, not just mow down everything that gets in their way with their Tenser’s Mystic Inflammable Bulldozer spell.
Page 325

And yet, this is exactly what Butcher did to Dresden.

I didn’t think I’d had much out on the island, but it’s amazing how many boxes it takes to hold not much.
Page 327

“The government isn’t the mob, Harry.”

I glanced at the clock as I filed out with the rest of the jury. Nine tomorrow morning. That gave me just under sixteen hours to do what wizards do best. I left, and began meddling.
Page 337

“Killing rarely is,” he said, “at least in my experience. Could you have done any differently?”

My instincts frequently roll their eyes at the decisions my brain makes.
Page 388

That was what haunts did. They followed you, sometimes for days and days, and they stared and their empty eyes made you relive the bad things from your life. If they did it long enough, you’d just wind up in a ball on the ground — and when you got up, you’d have big black eyes and the haunt would be telling you what to do from then on. I thought about telling
Page 401

He didn’t talk to me in a kid voice, like some grown-ups did. They sound different when they talk to children. My dad sounded like he did when he talked to anyone else.
Page 406

Learned this one the hard way when I talked to Kim Wasson's girl, Ceili. Don't. Talk. Down. Talk with.

But feeling true isn’t the same as being true. In fact, feelings don’t have very much to do with the truth at all.
Page 413

Nothing is truly safe in this world — and that being the case, why worry about threats that have not yet appeared?
Page 420

That might be the saddest part of human heart-stupidity: how much happiness you simply leave aside so that you have enough time to worry.
Page 420

"Depart this city. Do not come back.”

“There is nothing else,” I replied calmly. “You will do these things. The only question is whether you will do them of your own will or if I must teach you how.”
Page 429