Johnny Got His Gun« an older post
a newer one »The Disappearing Spoon
Book Notes Posted by kitt at 21:51 on 2 November 2018 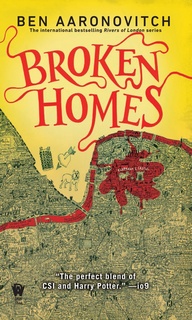 I think I kinda want all my Peter Grant book notes to say the same thing: love the book, love the series, something something rivers, if you enjoy the series keep reading, and, wow, do I love the cultural references, even though I figure I miss more than half of them.

This book is the fourth book in the Peter Grant series. It follows Peter as he tracks down a rare book that was flagged for notice if it ended up in the system, which it did. During the tracking of it, Peter finds the thief dead, and heads off to the home of the author of the book, also long since dead, but of interesting architectural interest.

Which leads to wondering what is so special about the book and the buildings and the architect. This resulted in lots of Wikipedia lookups of different architectural styles (by me, not by Peter), and an ending that was completely unexpected and brilliant in its surprise.

We have a hint of a longer story arc, too, which is intriguing, too.

I'm way enjoying the series, and sorta wish there were more good urban fantasy books coming out. If you're a fan of Aaronovitch, of course keep reading! If you're not, well, start at Midnight Riot and fix that.

Nothing kills and injures more police than attending a traffic accident on a fast road...
Page 2

The Folly had last been refurbished in the 1930s when the British establishment firmly believed that central heating was the work, if not of the devil per se, then definitely evil foreigners bent on weakening the hardy British spirit.
Page 24

“You can’t go wrong,” he said, “by searching anyone who engages you in conversation.” On the basis that nobody willingly engages the police in conversation unless they’re trying to deflect attention from something.
Page 29

“He lives on the outskirts,” said Jaget and we shared a moment of mutual incomprehension at the inexplicable life choices of commuters.
Page 48

Lots of hand gestures as he indicated where he wanted the solos to come in during the set because, as my dad always says, while improvisation and spontaneity may be the hallmarks of great jazz, the hallmark of being a great player is ensuring the rest of the band is spontaneously improvising the way you want them to.
Page 128

Instead, I made the usual squirmy excuses and promises of the fully grown man faced with his mum’s uncanny ability to knock ten years off his age at will.
Page 129

A quiet crowd is a bit of a worry to a copper, since a noisy crowd is one that’s telegraphing what it’s going to do next. A quiet crowd means that people are watching and thinking. And that’s always dangerous, on the off chance that what they’re thinking is, I wonder what would happen if I lobbed this half brick at that particularly handsome young police officer over there.
Page 131

“You can’t have protection from the law and then pretend it doesn’t exist when it suits you.” “Technically, we can,” said Effra. “Human rights are not contingent upon the behavior of the individual.”
Page 212

“They’re probably waiting for one of us to get freeze dried,” said Lesley, whose attitude toward taser deployment was that people with heart conditions, epilepsy and an aversion to electrocution should not embark upon breaches of the peace in the first place.
Page 214

The trouble with people is they’ve got a romantic view of the past.”
Page 230

Back then it was a privilege, not a right.” He finished his beer. “Not that decent housing shouldn’t be a human right, you understand? But in those days people appreciated what they had.”
Page 231

It’s a sad fact of modern life that sooner or later you will end up on YouTube doing something stupid. The trick, according to my dad, is to make a fool of yourself to the best of your ability.
Page 236

It was just as well Postmartin had his own copy, because he regarded people who annotate books the way my dad looked upon people who left their fingerprints on the playing surface of their vinyl.
Page 251

“You know how some people work at being stupid?” she asked. “If you give them a clear, common sense choice they give it a lot of thought and then choose stupid.” “I think we did probation
Page 254

“The farmer’s not going to like it if he comes tooling up in a tractor and he can’t get in,” I said. “He’ll get over it,” she said. “Farmers are always pissed off about something.”
Page 281

“Maybe they were made here,” I said and that’s when the Asbo’s car alarm went off. The Asbo had a good one too, a really annoying woo-woo-woo followed by the sound of a donkey being castrated with a rusty saw and then back to the woo-woo-woo. It cut off midway through the third cycle.
Page 286

From an ordinary policing point of view the best way to deal with firearms is to be outside the operational perimeter while SCO19, the armed wing of the Metropolitan Police, shoot the person with a gun. The second best way is to deal with the weapon before it gets pointed at you.
Page 288

“This is fucking stupid,” said Max, who had repeated this statement at regular intervals since we’d arrived here.
Page 292

But shove had arrived and I found I couldn’t make myself move, not even a little bit. It was shameful. I had found the upper limit of my courage. Fortunately for me, there is no known lower limit to human stupidity.
Page 294

“Do you think we should...” I nodded in the direction of the barn.

“Peter,” said Lesley. “From a purely operational point of view I believe that would be a really fucking bad idea.”
Page 298

SOMETIMES, WHEN YOU turn up on their doorstep, people are already expecting bad news. Parents of missing kids, partners that have heard about the air crash on the news — you can see it in their faces — they’ve braced themselves. And there’s a strange kind of relief, too. The waiting is over, the worst has happened and they know that they will ride it out. Some don’t, of course. Some go mad or fall into depression or just fall apart. But most soldier through. But sometimes they haven’t got a clue and you arrive on their doorstep like god’s own sledgehammer and smash their life to pieces. You try not to think about it, but you can’t help wondering what it must be like.
Page 347