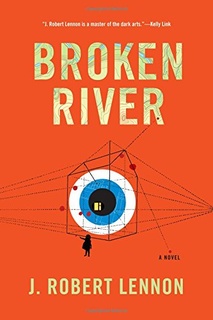 Finally, a book I know exactly from where I have a recommendation, even if I can't find the exact moment Patrick recommended it. I placed a hold on the book from the library, and had three days to read it before I needed to return it, as the other books I was reading needed finishing first.

And so, from start to finish, less than 24 hours. That in and of itself is an indication that it is an engaging book.

The book has the quirk of the Observer character, the mentioning of which is a non-spoiler about the book, as it shows up in the first ten pages or so. I guess in the perspective of things (first person, third person, third person omniscient, and such), the explicit Observer isn't unusual, but being called out and personified is puzzling. I wanted something to happen with the Observer, some explanation beyond a vehicle for explaining different location and context switching.

I was also weirded out by the father's constant male references to his female family, "dude," "man," and the like. Don't call a woman "Dude."

It was a fun, fast read.

In an act of evident ecstatic abandon, the woman turns a slow circle in the living room, then strips off her clothes. Does the man appear reluctant at first? Alarmed, even? Never mind. He is soon naked as well, and they make love pressed against one of the freshly painted plaster walls. With this act, their faces and bodies seem to assert, we hereby claim this house as ours.
Page 19

...and if a day arrives when the idea of removing all your clothes in someone else’s presence does not horrify her, she thinks that she will not feel compelled to limit herself to one lover.
Page 25

There is also a spiral kitchen staircase with tiny steps you can’t even fit your entire foot onto, and Irina habitually uses it instead of the main one because it is weird.
Page 26

I understand doing things because they are weird.

She is discovering that, with a man’s name, she does not get talked to like the twelve-year-old girl she actually is. She just gets talked to.
Page 36

Which I love. I try very hard to do this, having learned years ago with Kim Wasson's kid. Don't. Talk. Down.

Why? Is this irrational? Is she just being moody? From inside the emotion, it’s impossible to tell.
Page 37

When potential customers walk in, see the crowd, frown, and march back out, Eleanor feels responsible. She wants to leave now in order to accommodate what she perceives as other people’s more pressing needs. But she has identified this quality in herself as a personality flaw, and she doesn’t wish to pass it on to her daughter. So she pretends she belongs here and deserves this table.
Page 43

I understand this need. I often consider it as "thinking wholistically" when really it becomes the subjugation of the self.

Irina lets out a noisy sigh and theatrically slams her book shut. She says, “I don’t think I’m good at reading.”

“That’s silly,” Eleanor replies, with a reflexive strenuousness that unpleasantly reminds her, every time, of her own mother. “You’re a great reader.”

“I start reading a paragraph and then something reminds me of something and by the time I get to the end I realize that I’ve been thinking of the thing in my head and not the thing I just read, and I have to start over!”
Page 47

Her instinct is to reassure, but the truth is that she agrees with Irina, she feels the same way about books: about everything, really. Your favorite things are never good enough. They’re idealized by nature; their favoriteness is derived from Platonic forms, perfect realizations that existed only once, usually the first time, if at all. No book, no meal, no sunny day ever equals the one in your head.
Page 48

He took two steps and gathered her into his arms. The feeling was extraordinary: like being picked up by a warm gust and deposited on some sunny, grassy hilltop.
Page 51

She figured one of these days the scans wouldn’t be clean anymore. And she did not want that day to come.
Page 52

She loves Karl, but her love never wrung her heart out or made her feel like she would die if it weren’t reciprocated. Of course, that kind of love doesn’t last—just read one of her dumb books—but maybe this kind doesn’t, either.
Page 60

She is aware that all of the things about him that presently vex her—his intensity, amorousness, and imperturbability—are the very things that attracted her to him in the first place.
Page 60

But Irina has already hitched the guitar up onto her shoulder and is pushing her way out the door and into the overcast and mildly stinky fall day. She feels bad for letting the real world seize and dispirit her so quickly.
Page 101

She is going to cry! She is looking forward to this aspect of childhood being over—this thing where you can’t control your emotions and they aren’t even about the things you really care about.
Page 105

The other understanding in her family, usually only spoken under the influence of drink, was that the over-recommended full mastectomy was an instrument of patriarchal domination, a means of controlling the sexual power of women. That in fact breast cancer itself was the world’s response to its poisoning by masculine striving. Men wanted to blame the breasts for getting sick, instead of themselves for polluting them. The full mastectomy was a gendered act of violence, a cowardly expression of projected self-disgust.
Page 157

“That’s your problem.” It is a philosophical tenet of their family that boredom is an ailment of a lazy mind and not the result of a lack of provided stimulation. It is the unsavory byproduct of bourgeois society.
Page 159

After a moment, Irina says, surprising herself, “Is this what life is going to be like now?”

It is into the chalice of his cupped hands that he mumbles the words “I sure as fuck hope not, dude.”
Page 190

Perhaps it can, in fact, influence events and objects: but how? And what actions might result in which outcomes? The Observer understands this as a problem of equal import and difficulty for the humans: the unpredictability of cause and effect.
Page 194

None of it matters—the coincidences, the connections. Things look connected because everything is connected in a place like Broken River. That’s why people want to leave small towns. Everything reminds them of some stupid shit they did or that was done to them. These people aren’t part of some grand conspiracy. They’re just some fucking losers living in a shit town, like pretty much everybody else on earth.
Page 197

Those are her thoughts. But she keeps them to herself, and Craig goes on talking, as men do.
Page 208

She can imagine how she must look to him right now—fatigued, depleted, disagreeable. Desperate. She doesn’t want to be this way, and neither does he. But here they are.
Page 211

She isn’t sure why she cares. Eleanor does not want to be the kind of person who can become unhinged by jealousy, never imagined that she could be. But maybe when somebody is ready, any available stimulus will do to effect the unhinging.
Page 213

But reading a book, man, that was work. Hours and hours, sitting in a chair or lying in bed, the eyeballs darting back and forth, line after line after line. It would have been an insane mental and physical endurance test.
Page 222

Reading is a joy.

Now, though, the excitement of midnight was gone. It just felt lonely here, lying in bed, being awake for no reason when the rest of world was asleep.
Page 227

“I had these ideas!” she cried; it was late and Father was out in the studio and Mother seemed uncharacteristically happy and relaxed there in her office, with a glass of wine. “And now I don’t like them anymore!”

“That’s because your book grew up while you were writing it.”

“But what do I do?” Irina asked, drawing out the ooooo in dramatic fashion.

“You fix it in the rewrites.”

“How long does that take?”

“Longer than the writing part, usually,” Mother said. “For me.”

Irina whispered, “But I worked so hard.”

“You needed to work hard, to get to the good ideas. The old ideas weren’t bad, they just weren’t what the book wanted to be. It’s okay to write a rough draft. That’s why they’re called that.”
Page 228

“If you’re going to be a writer,” Mother replied, “you’ll learn. Because the thing is, all of the stories we tell ourselves are wrong. All of them.”
Page 229

People come and go and do things impulsively, and they hurt each other and themselves. The outside world doesn’t understand. Do you get that?”
Page 233

It is not necessary to be the way I’ve been, she thinks, as the nurses and doctors swarm and confer, as they ask her questions she hasn’t the slightest idea how to answer. I can be different.
Page 251

I can be different.

Over and over they come together, and if they fail to derive pleasure from these encounters, they find satisfaction in suffering. They are more attached, perhaps, to their suffering than to their pleasure. This stands in direct contradiction to their stated goals, which are those of comity, happiness, calm. But it is pain that gives their lives meaning.
Page 264

The beauty of Craig was that he appreciated everything that happened as it was happening and never betrayed any disappointment when it ended, whether it was a good meal or a professional relationship with one of his writers or half an hour in bed with a woman half his age.
Page 269

But it has understood for some time the folly of wishing to soothe the humans; they are built to feel, and there are feelings they crave, and no amount of information can suppress the emotions they torment themselves with.
Page 270