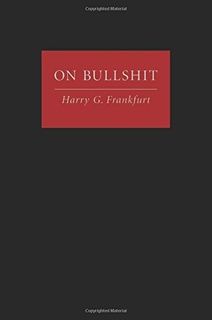 Rob Whiteley recommended this book to me, mentioning that the book is short, yet profound when it comes to determining what bullshit is, and what it is not.

The book is an essay on bullshit. Given the title, this should be obvious. It should have taken me about a half hour to read. I spent much longer reading it, because some parts of it were worth rereading and sitting with, before continuing.

The book is, as Rob says, worth a read. Most libraries have it. I recommended heading over to your nearest, sitting down with a cup of coffee, and reading it during lunch.

The idea behind it is subtle but powerful.

It is just this lack of connection to a concern with truth — this indifference to how things really are — that I regard as of the essence of bullshit.
Page 33

What is distinctive about the sort of informal discussion among males that constitutes a bull session is, it seems to me, something like this: while the discussion may be intense and significant, it is in a certain respect not “for real.”
Page 35

It does seem that bullshitting involves a kind of bluff. It is closer to bluffing, surely, than to telling a lie.
Page 46

In fact, people do tend to be more tolerant of bullshit than of lies, perhaps because we are less inclined to take the former as a personal affront. We may seek to distance ourselves from bullshit, but we are more likely to turn away from it with an impatient or irritated shrug than with the sense of violation or outrage that lies often inspire.
Page 50

Telling a lie is an act with a sharp focus. It is designed to insert a particular falsehood at a specific point in a set or system of beliefs, in order to avoid the consequences of having that point occupied by the truth.
Page 51

Since they are told only on account of their supposed indispensability to a goal other than deception itself, Saint Augustine regards them as being told unwillingly: what the person really wants is not to tell the lie but to attain the goal.
Page 57