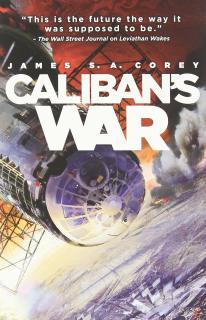 Well, that didn't take me long to read book two of The Expanse series, which is really unsurprising, given how much I enjoyed the first one.

Reading the second book of a series is often risky literary-wise. In trilogies, book two is usually the boring one. In a longer series, the author (or, in this case, the singular-pen-named authors) usually starts out strong with the first book, stumbles with the second book (*cough* *cough* Dobby, *cough* *cough* loup-garou), and hits a stride with the third (unless you're Jordan, then, well, book 8 is where you fall completely flat on your face).

This particular book two was just as exciting as the first. Without losing any continuity, we are immediately back with Holden and Naomi and Alex and Amos in the Rocinante, off on another "o. m. g. you have the most incredible, and highly plausible, luck imaginable" adventure.

This is a space opera.

The time frames of the book are similar to those of the Saga of the Seven Suns, but the telling in the time frames isn't as jarring or as boorrrrrrrrrrinnnnnnggggg as that series. You still have days of travel, you still have death from and serious health consequences of high G forces, you still have the fear of immediate death beyond that thin shell of a hull.

This book is much faster paced, much more interesting and much more entertaining. I absolutely f---ing adore Chrisjen Avasaralad and hope we see her again in later books. I was also hoping Bobbie Draper might join the crew of the Rocinante (such a great ship name). We'll see if she shows up in a later book or two.

Zipped through this book as fast as I could. Started the next one, Abaddon's Gate, immediately.