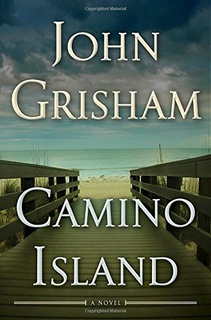 Okay, I think this is the first Grisham I have ever read. I have to say, I enjoyed it. If you read the various reviews, all the men and Grisham fans are loudly saying "THIS ISN'T GRISHAM, THIS IS A GHOST WRITER! Hated it," and all the women (yes, hyperbole) are saying, "This was a great read!" Be unsurprised, as the protagonist is a woman. And a book-reader at that.

Moazam recommended this book to me a bit ago. He commented he thought I would enjoy it, as it is about books and reading and bookstores and wheeeeee! Well, he was right about this one. I was careful to wait until he finished it before starting it, though. He had a couple recommendations that missed the mark. This one was on. More on that I would have expected it to be, given that I had recently read an F. Scott Fitzgerald book, my first, and the original manuscripts were fictionally stolen at the beginning of the book (so, I'm not spoiling the story by saying that, it's on the back cover, too). A delightful coincidence.

This was a fun read. If you're a Grisham fan, this will be a change of pace, based on the other reviews. I find this to be a good beach read, but definitely not high literature.

The heist was over, it was a success, but in any crime clues are left behind. Mistakes are always made, and if you can think of half of them, then you’re a genius.
Page 21

He claimed to average four books per week and no one doubted this. If a prospective clerk did not read at least two per week, there was no job offer.
Page 55

I really cracked up at this. I managed this feat in 2015, but haven't quite managed a repeat performance since. This year I'll be just under 2 a week, I think, at 1.8 a week.

She didn’t buy books either. Why buy books when you could get them for free at the library?
Page 70

Something I recently started doing myself! Thanks, Libby!

But she was a writer, not a teacher, and it was time to move on. To where, she wasn’t certain, but after three years in the classroom she longed for the freedom of facing each day with nothing to do but write her novels and stories.
Page 72

Having time does not mean work will actually happen.

When he’d sold cars he talked about nothing but cars, and now that he scouted for the Orioles he talked of nothing but baseball. Mercer wasn’t sure which subject held less interest, but she gamely hung on and tried to make lunch enjoyable.
Page 88

We talk about what is important in our lives at the moment.

“Tessa always said you were too competitive. Checkers, chess, Monopoly. You always had to win.”

“Have you been to the store?” Myra asked.

“I stopped by on the way here. It’s lovely.”

I feel this way about every bookstore. And every chocolate store. And paper store. And tea shop.

“Anybody else?” Mercer asked. So far every other writer had been trashed and Mercer was enjoying the carnage, which was not at all unusual when writers gathered over drinks and talked about each other.
Page 119

Same for pretty much any vocation.

“Got a bunch of the self-published crowd. They crank ’em out, post ’em online, call themselves writers."
Page 119

We all want to believe our work is better, more important, "correct," and those who didn't suffer or found an easier way are somehow less.

They moved a lot, and always to larger homes in nicer neighborhoods. They were chasing something, a vague dream, and Mercer often wondered where they would be when they found it. The more money they made the more they spent, and Mercer, living in poverty, marveled at their consumption.
Page 212

On the one hand she almost admired their ability to love each other enough to allow the other to stray at will, but on the other hand her southern modesty wanted to judge them for their sleaze.
Page 217

“A fling? Your wife has been sleeping with her French boyfriend for at least a decade. You call that a fling?”

“No, that’s more than a fling, but Noelle doesn’t love him. That’s all about companionship.”
Page 220

Own it, girl. The old saying from college: “If you’re gonna be stupid you gotta be tough.”
Page 230

“Thanks. So will you finish that?”

“I doubt it. I’ll give any book a hundred pages, and if by then the writer can’t hold my attention I’ll put it away. There are too many good books I want to read to waste time with a bad one.”
Page 237

I wish I could stop reading bad books. Instead, I read faster to stop the pain.

“Same here, but my limit is fifty pages. I’ve never understood people who grind through a book they don’t really like, determined to finish it for some unknown reason. Tessa was like that. She would toss a book after the first chapter, then pick it up and grumble and growl for four hundred pages until the bitter end. Never understood that.”
Page 238

Even though Mark was being filmed and recorded, all four FBI agents and all five grim-faced young men from the U.S. Attorney’s office scribbled furiously as if their notes were important.
Page 273