All Systems Red« an older post
a newer one »This Is How You Lose The Time War
Book Notes Written with a loving hand by kitt some time around 11:08 on 19 September 2019 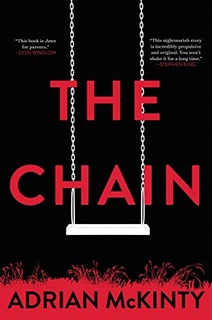 Anyway, the basic premise is that there is a chain of kidnapped children. Once a child has been kidnapped, she / he will be returned only if a ransom is paid and the ransomee kidnaps another child and repeats the instructions, inflicts the same mental anguish, on the next family. While the kidnapped person is nearly always a child, according to the rules, the loved one to be kidnapped could be an adult. In reality you can count on a mother's love for her child FAR MORE than a partner's love for their partner, so children are "better" targets to keep the chain going.

The psychological thriller part of the idea is the progression of victim to perpetrator, that to save one's child, one must inflict the same pain on another family. The book does an okay job of conveying the mental torture of how awful this would be, to have a belief about yourself, that you are a good person who would never do these things, and yet, here you are, doing these exact horrible things. There is absolutely no good way through what would be an absolutely horrible situation, if this were real. The mental scars would be around for a long, long time, which the second half of the book tries to portray, also doing an okay job.

That none of it leaked, despite going on for six years in a relatively small area (New England) strains the reader's suspension disbelief, unless said reader realizes that, eh, there is a lot of random shit that happens to good people, and no reason that people on the other side of the world / country / state would necessarily know about it. 50+ kidnapped kids a year, ehhhhhh, could happen.

If you're a fan of McKinty's writing, definitely read the book. If you like quick-paced, fast read, somewhat unbelievable psychological thrillers, this could also be a good read. It was waaaaaay better than The Woman in Cabin 10, if you want to use that as a reference point.

The Egyptians thought the afterlife was located in the stars. But there is no afterlife, is there? Grandma believes in the afterlife but nobody else does. It doesn’t make any sense, does it? If they kill you, you’re just dead and that’s that. And maybe a hundred years from now, they find your body in the woods and nobody even remembers who you were or that you’d gone missing.
Page: 25

“Rachel O’Neill, as I live and breathe,” he says with a grin. “Oh, Rachel, why do birds suddenly appear every time that you’re near?”

Because they’re actually carrion crows and I’m one of the goddamn undead, she thinks but doesn’t say.
Page: 33

There are a breathtaking number of people whose profiles and posts are public and can be viewed by anyone. George Orwell was wrong, she thinks. In the future, it won’t be the state that keeps tabs on everyone by extensive use of surveillance; it will be the people. They’ll do the state’s work for it by constantly uploading their locations, interests, food preferences, restaurant choices, political ideas, and hobbies to Facebook, Twitter, Instagram, and other social media sites. We are our own secret police.
Page: 41

“Helen seems the type to brag about using that system to find her kids, but she hasn’t mentioned it,” Rachel says, surprising herself with the bitterness of this observation. She remembers that Tacitus line about how you always hate those you have wronged. Or those you are about to wrong in this case.
Page: 99

Rachel puts her hand on his chest and feels his heart beating. Calm, slow, deliberate. He has three tattoos: an ouroboros serpent, the Marine Corps logo, and the Roman numeral V. “What’s the V stand for?” she asks. “Five combat tours.” “The ouroboros?” “To remind myself that there ain’t nothing new under the sun. People have survived worse.”
Page: 208

"Recall that one builds a labyrinth not to hide but to lie in wait.”
Page: 242

Every choice she has is a bad one. Action is bad. Inaction is bad. It is a classic zugzwang situation. You have parachuted into the minefield and there is no safe way out.
Page: 245

“Either of you ever done any kriging or matrix programming or regression analysis?” he asks. “Kriging?” Rachel asks, wondering what the hell he’s talking about. “It’s a Gaussian-process regression. A tool for statistical analysis. No?” Pete and Rachel shake their heads. He taps the table number. “The number seventy-three means what to you?” “John Hannah, offensive lineman for the Pats,” Pete says quickly. “Gary Sanchez briefly wore number seventy-three when he first came up with the Yanks,” Rachel says. The man shakes his head. “What does it mean to you?” Rachel asks. “It is the twenty-first prime number. The number twenty-one has prime factors seven and three. A pleasing coincidence. Table seventy-seven is also free over there. It’s not prime, of course, but it is the sum of the first eight prime numbers and the atomic number of iridium. Iridium is how they finally proved what killed the dinosaurs, which was the big mystery when I was a kid. The iridium-marker layer in the K-T boundary. Atomic number seventy-seven was the harbinger of death for the dinosaurs. It’s an ending number. All books should end on the seventy-seventh chapter. They never do, though. But we’re beginning something here, aren’t we? Hence table seventy-three, which is a little more appropriate than seventy-seven, yes?” Rachel and Pete look at him in utter bafflement. He sighs. “All right. Mathematics is not your forte, I see.
Page: 247

She turns on Erik’s app. It has downloaded successfully but when she tries to open it, a message flashes on the phone’s home screen: For this app to work you need to enter the next number in this sequence: 8, 9, 10, 15, 16, 20…If you enter the wrong number your phone will be locked and all devices associated with your account will be disabled for twenty-four hours.

“I always thought that if we were going to go down, it would be because of you tangling emotions with business.” She smiles. “Christ, Olly, that’s how everybody goes down in the end. Didn’t you know that? You can’t fight biology.” “You can try,” he says.
Page: 315