Death Masks« an older post
a newer one »Endurance
Book Notes kitt decided around 21:25 on 4 May 2017 to publish this: 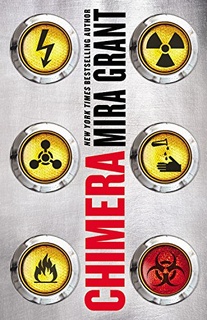 Yes, we know that all life wants to live. We get that.

Yes, we know you're a worm who is in a human body and there are ethical issues surrounding that takeover. We get that.

Yes, we know that you love Nathan, tolerate Cale, and can't stand Sherman. We get that.

But say it all in fewer words.

Again, this book feels like each chapter was written as a short story, with Grant (not her real name) needing to explain (again) each part of the story's history in order to give some action. No, it wasn't needed. A small saving grace is that at least there's more action in this book than the last one.

Both of these books needed an editor who was willing to actually use her powers of editing to cut down on the repetitions. If I said this about Rowling, I can say it about Grant: Too. Many. Words.

"I had lived the first six years of my life going along the path of least resistance and letting other people make my decisions for me."
Page 19

Welcome to most people's first 18 years of life.

The human tendency to focus on the inconsequential to avoid focusing on the traumas at hand could be completely ridiculous at times.
Page 21

YAWN. Yes. We know. We f'ing know this already. This is, by the way, the only reason I kept reading this book, even though I did so at lightning speed. In retrospect, I should have just read the summary from some website.

“I hate that word. All it means is ‘you don’t think like I do,’ and by that standard, everyone is insane."
Page 163

While the book is slow going, it does have a few zingers, bits of truth in it.

People would always be telling her who and what she had to be. At least this way, she could choose one of the things that would define her to the rest of the world.

I wanted to ask why it was our good luck, and not the bad luck of the original owner — who had clearly either become a sleepwalker or been devoured by them—that mattered here.
Page 190

“Knowing the direction doesn’t mean you have to go.”
Page 194

"This is not what I intended. This is all her fault."
STAGE I: GENETIC DRIFT
Page 201

Unsurprisingly, this completely fits with the Sherman character: arrogant and impulsive, and completely unable to accept responsibility for his own actions. Grant got this part right.

"What if I did something wrong, and messed up Juniper the way the Mitchells had damaged me?"
Page 209

Blah blah blah, no, the Sal character isn't special. ALL parents feel this way. Every. Fucking. One.

Science is a powerful tool, but like any tool, it doesn’t care whether it hurts you. Fire warms us, cooks our food, protects us from predators, but it will burn us if we let it. Fire is more than happy to eat us all alive. Science is fire writ large.
Page 227

Humanity has always been disturbingly happy to sacrifice its future on the altar of right now.
Page 227

It was nothing compared to what came next.
Page 262

JEEZ, this was another annoying part of this book. It was full of "and you won't believe what happens next." Ooooooo, foreshadowing. Editor, cut out all of these, except maybe (MAYBE) one.

The drums had stopped.

You know what? I have no idea what I was thinking when I highlighted this passage. I could go back and find it, but I don't care enough about this book to do so.

I can't stand this historical rewriting that everyone does.

So I went with him willingly,
Page 265

Who writes this crap?

Oddly, she was perfectly happy to have Beverly accompany me while she stayed behind. As long as there was a dog with me, she believed I would come back.
Page 272

Haven’t you ever noticed how when a man says one thing, and the woman says another thing, people will almost always believe the man is the one who’s telling the truth? Even if she has more proof than he does.
Page 278

Yep. Same in the real world. Grant nailed that one.

“It’s interesting, isn’t it, how facts fall down in the face of appearances?
Page 286

All about marketing. Thought for another post, I'm sure.

“Amateurs. Evil amateurs, which is the worst kind. Couldn’t we have had the villains we deserved?”
Page 352

dead. How much time were we going to spend arguing about the dead before we started to understand how unimportant they were compared to the living?
Page 355

But still, I should have found a way to stop him.
Page 379

More annoying history rewriting. You know what? Sometimes you CAN'T. Especially when the author just wants to write a whiny character.

“She’s a spitfire and a half,” he said. “Always running for the hills and shouting when they don’t come to meet her.”
Page 380

“It’s weird when you say things that make sense,” I said.

Fishy beamed. “I am the living incarnation of the Konami Code.”
Page 403

I had asked once whether amnesia was a form of dying, and I had been assured that no, no, it was just a second chance at figuring out who you really were.
Page 415

Putting yourself in harm’s way over and over again is not the most effective means of committing suicide.
Page 429

Survival is the main drive of any living organism.
Page 433

If we didn't know this fact before reading this book, WE F'ING KNOW IT NOW.

I considered telling him what Fishy had said, about not blaming babies for the things they did before they were born. Babies didn’t ask to exist, but once they did, they wanted to keep going.
Page 433

We walk on the graves of our unborn selves, the futures we never got to live, and some of those people wouldn’t get along very well with the ones we actually decided to be.
Page 452

The thought was sobering. How many people’s motives didn’t match up with what I’d taken for their actions? How many villains were the heroes of their own stories?
Page 457