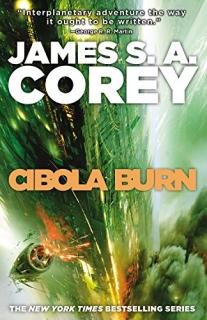 Okay, to start, I love the Expanse series. I love the writing styles (because there are two authors). I love the Rocinante crew.

"An empty apartment, a missing family, that's creepy. But this is like finding a military base with no one on it. Fighters and tanks idling on the runway with no drivers. This is bad juju. Something wrong happened here. What you should do is tell everyone to leave."

The gates have opened the way to a thousand new worlds and the rush to colonize has begun. Settlers looking for a new life stream out from humanity's home planets. Ilus, the first human colony on this vast new frontier, is being born in blood and fire.

Independent settlers stand against the overwhelming power of a corporate colony ship with only their determination, courage, and the skills learned in the long wars of home. Innocent scientists are slaughtered as they try to survey a new and alien world. The struggle on Ilus threatens to spread all the way back to Earth.

And the whispers of a dead man remind him that the great galactic civilization that once stood on this land is gone. And that something killed it.

Great. But you know what this book is really about?

That "corporate ship" and the "independent settlers" and just how much assholes people can be to each other when property, life, and liberty are in question.

A group of settlers settle a planet. The UN says, nope, it "belongs" to this corporation that has received a charter to explore it. Even as every person on both sides is about to f'ing die, some people are determined to be assholes.

I could not stand much of this book, because it completely and totally pushes my "I hate assholes" and "Everyone is an asshole" buttons.

Not sure how long before I can read the next book in the series, this one has me spasming in annoyance.

During the book notes

Which is to say, I'm reading this book at 10x speed, appreciating the Holden parts, hating the Murtrey parts.