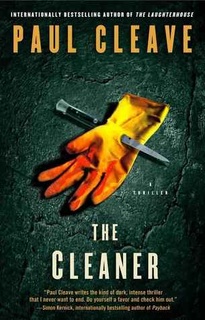 I have previously like Cleave's writing, perhaps less than Mom does, but enjoyed it none-the-less. The first one I read of his, Trust No One, I really enjoyed. The second one less so. This one I actively dislike.

Because the main character is a sadistic murderer, and we hare supposed to feel sympathy for him because he got his ball crushed in a vise (yes, literally, I'm giving you a spoiler there) and he's being framed for a murder he didn't actually do. That is, one he didn't do. We're told to ignore the six murders and rapes he did do.

No. No no no. There is a lot of misery and pain surrounding those deaths (well, in the fictitious world there is, but there's enough around in the real world to be able to make the connection), and those are pretty hard to ignore with the basic premise of the whole plot.

Now, the social commentary part is a bit more interesting. Cleave weaves a tale of first impressions, how our prejudices blind us to reality, and how being able to see past our assumptions is crucial to surviving, even thriving, in this world.

That particular commentary, however, doesn't negate the horrid thought that we are to sympathize with an active and deliberate murderer.

Read Cleave's other books. Skip this one.

It was hanging over her heart when she drove her parents to the funeral home, sat down with the funeral director, and, over tea and coffee that nobody touched, shopped through coffin brochures, turning the glossy pages and trying to pick out something her dead brother would look good in. They had to do the same for the suit. Even death was fashion conscious.
Page 4

The cemetery is an expanse of lush lawn broken up with cement markers and, at the moment, mostly deserted, except for a handful of people standing in front of gravestones, all of them with tragedies of their own.
Page 4

How can it make sense that he should die at fifteen, almost sixteen? The other people planted in this location average sixty-two years old.
Page 5

Back at the bathroom door I call out to her. “Come out or I’ll break your cat’s neck.” “Please, please don’t hurt her.”
Page 9

It seems the only thing Mom has to live for is talking. And complaining. Luckily the two go hand in hand for her.
Page 18

The fantasy wasn’t as good as the reality, and the reality was much messier, but it was an experience, and they say practice makes perfect.
Page 39

Henry then went on to point out that if man was made in God’s image and man was doing nothing to help him, then God would be doing nothing too. If God came down to walk about the earth, Henry said, and saw him sitting there outside the parking building, begging for change and food, then God would look right through him and just walk on by. The same way everybody else did.
Page 59

Strangely, it was Martin who suffered the least, because he didn’t understand he was dying. Even at the end he thought he was going to be getting better. Didn’t they all think that? Yes. Life was always going to get better.
Page 71

I’m not actually sure where ideas come from, whether they’re just floating around out there in some dimension close to but not quite of this world, where our minds can reach out and pluck them, whether a series of firing synapses in our mind weigh up cold data into cold possibilities, or whether it comes down to a simple train of thought riding through Lucksville. Ideas come at any time, often when you’re not expecting them.
Page 73

The interesting thing about insanity is that Insanity is strictly a legal term, not a medical one. Patients like me are not insane—we just plead it if we’re caught. The reality is if we really were insane, we wouldn’t be trying to evade conviction—we’d be caught at the scene smeared in blood and peanut butter and singing Barry Manilow tunes.
Page 125

“So why are you talking to me?” I ask. “I’ve got bills to pay.” Sure, that and the fact that money will always win out over fear, loyalty, truth, or whatever other bullshit shoves its way into a prostitute’s life.
Page 227

“She threatens him, she even goes to the police, but at the end of the day her fear of him and her love for him prevent her from acting. This woman is a loser. You can’t understand how she could even have married a guy like that, let alone have his children. But you forget he’d been charming when she met him, the same way you were charming when you met your wife.”
Page 326

Do you know what it’s like, Joe, to know you’re absolutely right about something—I mean, beyond any doubt—but you can’t get somebody else to agree with you? It’s not that they don’t understand, or that they don’t want to. They’ve become so used to doing the wrong thing that there couldn’t possibly be another way.”
Page 332

Her parents reminded her time and time again, but the problem when people remind you so often is that you start to ignore it. The words go in, but they don’t settle anywhere.
Page 339