Blindsight« an older post
a newer one »Eternal Flame
Book Notes kitt decided around 22:24 on 18 March 2017 to publish this: 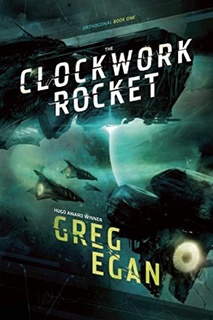 This is book one of the Orthogonal series.

I am struggling to remember where this book was recommended, but I know that it was recommended at least twice, as when I went to buy it a second time, I realized I already owned it. Given I'm known to buy books multiple times, it was refreshing not to buy yet another one multiple times accidentally. On purpose, that's fine.

Anyway, the book, and it's subsequent two books, are not about the human world, but rather about a world, a universe, where time is an extra spacial dimension, which means it has a direction (hence the name of the series, "Orthogonal"). I was really unsure about reading a book about non-people, such worlds pretty much don't interest me, but the physics in the book totally caught my attention.

Yeah, the physics described in the book are pretty much the physics I learned in my first year at college, and wow, what fun it was to revisit the discoveries.

One of the quirks of the characters of the books is that the women split into their sons and daughters to give birth, no child has seen her mother as the mothers die in the splitting into two to four kids. The men raise the children, that's what their life goal is all about, and part of the presented culture and tension in the book.

I didn't save any notes from the book, which is odd for me recently. I am uncertain about continuing the series, but do have books two and three, so likely will read the next two.