Life Undercover« an older post
a newer one »The Great Hunt
Book Notes Instead of being asleep at 18:29 on 16 March 2020, kitt created this: 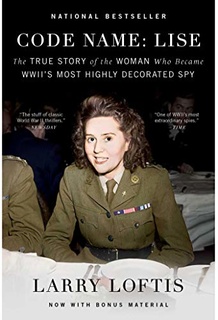 I don't recall where this book was recommended to me, or by whom. It continues my reading of World War Two survivor accounts, however. I do know know if I am reading more about World War Two because there is more to read, or because when you start to read about the horrors, more of the stories surface. I have no idea the source, but I'm reading more, and none of them lessen my horror of that time.

Code Name: Lise tells the story of Odette Sansom, a French woman who married an English man, moved to England, and became part of England's Special Operations Executive during World War Two. Her accent and knowledge of France made her well-suited for the role. She originally came on a courier for messages from the actual spies, but "courier" or "spy" is still the enemy in Nazi Germany during World War Two, and so, when caught, she was treated as if she were the spy.

Odette's story is fascinating and interesting and well worth a read. Loftis' telling isn't as horrific as a number of the other Holocaust books I've read, but that doesn't lessen the horror or tension.

The surprise I had from the book was the references to the German police force that pretty much despised the Gestapo. I considered the Nazis to be all of one mind, but, hello, even a 5 second consideration would have had me reconsidering that thought. There are people involved, so of course there would be those in the system who opposed the Nazis. It wasn't a consideration I previously had. I suspect had I studied the era more, I would have come to this realization much sooner than I had. People.

The book is worth reading, but I'd argue for The Volunteer and The Choice over this one, for better World War Two atrocity understanding.

Lest Odette despair or feel sorry for herself, her grandfather encouraged her not to use blindness or pain as an excuse or handicap, but to be as clever as possible; there were many things she could do, and she should focus on those. Odette heeded the instruction and, as Hemingway put it, became strong in the broken places.
Page: 2

The quaint village was a haven and refuge but had a surprising disadvantage: the countryside and rolling hills—fresh with apple orchards, blackberries, and dahlias—were so enjoyable that Odette began to feel guilty. Countless others, she knew, were sacrificing greatly for the war.
Page: 4

He asked her how she felt about the Germans, and she said, “I hate them. I mean that I hate Nazis. For the Germans, oddly enough, I have pity.” “I thought you might separate Germans and Nazis. It was not the Nazis but the Germans who killed your father.” Odette blinked. Jepson had done his homework. She looked at the captain. “Yes, but they were driven then as they are driven now. I think the Germans are very obedient and very gullible. Their tragedy—and Europe’s—is that they gladly allow themselves to be hoodwinked into believing evil to be good. Last October a German major was shot in Bordeaux. You know that?” Jepson nodded. “The Nazis took one hundred hostages and shot fifty of them. You know that too?” He nodded again. “Well, it’s not only because of that that I hate Nazis. It’s because theirs is a humorless creed and a damned creed, and because they make men despoil other people’s fields and carry misery and fear wherever they go.”
Page: 9

Odette struggled with the decision for months. “If everybody thinks my way,” she asked herself, “what is the future going to be for all of those children everywhere? If I were in France, with children, I could be like some of other people who’ve already been captured, even with their children in concentration camps. No, because I’m here, I have a great excuse for not doing anything more than staying put with my children.”
Page: 11

“In many ways it’s a beastly life,” he told her. “It will be physically hard. More than that, it will be mentally exhausting, for you will be living a gigantic lie, or series of lies, for months on end. And if you slip up and get caught, we can do little to save you.” “To save me from what?” Odette asked. Buckmaster shrugged. “Oh, from the usual sickening sort of thing; prison, the firing squad, the rope, the crematorium; from whatever happens to amuse the Gestapo.” As one agent put it, what Buckmaster offered was quite simple: death. But a useful, heroic death.
Page: 13

Was he a soldier or a policeman? he wondered. He had no qualifications for the duties and enjoyed no aspect of the work. But what else was he to do? It was wartime and he had to obey.
Page: 52

Hugo would be undertaking a new, broader assignment, Reile told him, arresting British spies and Resistance saboteurs throughout the country. “We are fighting against bitter enemies who do us immense damage,” he said. “It is our duty to fight them with every available weapon, but I want our methods to remain clean; for our coat must remain clean, too. No violence in interrogations, no third degree, which does not really produce good results. No threats, please, and above all no promises that cannot be kept.” Hugo was fully aware that the instruction was to operate in a fashion exactly the opposite of the hated Gestapo, filled as it was with thugs and criminals. The Abwehr, as a military organization, expected discipline, civility, and professionalism.
Page: 53

Some returned; some didn’t. Of those who did, some retained a dram of dignity; others came back a shell of their former selves—physically, mentally, emotionally. Everyone has a breaking point and the Gestapo were professionals. The weak could be broken through hunger, hence the Fresnes starvation. Simpletons could be broken psychologically, repetition-to-attrition the favored technique.
Page: 136

Extended torture is a journey through a long, dark tunnel. When the agony reaches its apex—the black hollow—the body’s survival mechanism kicks in and the victim blacks out. The more skilled the torturer, the closer he brings his subject to unconsciousness without triggering the reaction. The Commissar was an expert.
Page: 151

It was by design; the Nazis preferred to torture using locals so that no one could say they were mistreated by a German.
Page: 152

After three weeks Hugo’s local captain called him in, saying that they had negotiated a capitulation to the Canadians and that everyone would go to a prisoner of war camp as one body. Hugo refused. “You are a soldier and must obey,” the captain said. “I can obey no order that obliges me to be taken prisoner.”
Page: 215

Like many Germans, he hated the Nazis and had been involved with the Kreisau Circle in the thirties.
Page: 224

German political infighting during the war was a grimly fascinating spectacle. While the overwhelming bulk of the "new organizations" in the German government were deeply Nazi (SA, SS especially), a lot of the old line institutions were fairly anti-Nazi, including the Wehrmacht. The German Army was at its heart, still the instrument of the Prussian landed aristocracy, who deeply despised Hitler and the street brawlers that put him in power. There was more than just a whiff of class and caste when a man with the title "von" in front of his last name, and a few centuries of wealth and privilege behind him, dealt with the usual street-thug turned Nazi official. Ribbentrop (Hitler's foreign minister) had been a champagne salesmen before his rise with the Nazis. He affected to use the "von" in front of his name due to some fictive connection to aristocracy through his wife. The old-line Prussian generals and industrialists thought he was a lowlife, and said so. They had about the same opinion of all of the leading figures in the Nazi government.

In civil society, the Nazis very effectively destroyed all resistance, including the Kreisau circle and White Rose. In a way, the safest place to be an anti-nazi was in the Army. Virtually all of the plots to kill Hitler came from the armed forces or intelligence services (there were 16 different plots that all failed). The German intelligence services, at some level, even actively collaborated with Western intelligence services on how to get rid of Hitler. Early in the war, Canaris (who was the head of the Abwehr) literally begged his counterparts in British intelligence to tell the UK government to stand up to Hitler.

So yeah, if the people at the top had all of this infighting (and actively anti-nazi sentiment), then it makes complete sense that there was a lot of that at the street level as well. I imagine that people got a good deal more anti-nazi as the war came home to Germany.