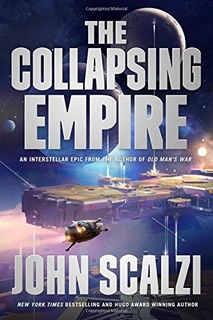 Okay, I hadn't exactly intended to sit down and read this book all in one go. I am in the middle of three other books and just happened to have none of them with me, along with no cell phone coverage and no wifi, when I realized I needed both to be doing something, and to be reading.

When in such a situation, you do the normal thing. You panic.

Okay, no, you pull up another book and start reading. If you don't mind having 10 books in progress, 11 isn't going to matter much.

At the end of the day when I finished this book, I was like, yep, I will read pretty much anything Scalzi writes, and I'm happy I read this one. It is classic Scalzi, with an interesting science-based world, action to satisfy any swashbuckler, and wit to entertain everyone.

Which is a thing with Scalzi books. All of his characters, the "good" ones, are witty and smart and quick. And good. Which is just ... not ... realistic. His stories and characters lack the overt pettiness and cruelty and anger and jealousy of the real world. Which may be why they appeal so much: a world where smart, good, even nice people are actually able to succeed. Oddly.

Anyway, yes, on my new book-review scale, this is a fan-worth book. If you're a Scalzi fan, DEFINITELY read it. If you aren't, you'll likely still enjoy it.

“And then no one can tell me what to do.”

“Oh, no,” Batrin said. “Everyone will tell you what to do. But you won’t always have to listen.”
Page 36

“What? No,” the duke said, and Kiva saw Ghreni twitch out the very smallest of smiles. “No, not that. I meant the difficulty with this virus your house brought to us.”
Page 55

Okay, when I read this line, I was reminded of Kim, and the part where Kipling commented (paraphrasing), "Asiatics never smile when they have won, but now, Mahbub Ali almost did." If you are a spy, or someone very, very good at maneuvering politically, you don't smile, not even the smallest of twitches, when you win. You don't reveal anything.

“I’m not sure I like this entirely honest you,” Cardenia said, after a moment.

“If you like we can adjust my conversational model to be more like I was in life.”

“You’re telling me you lied to me in life.”

“No more than to anyone else.”

We all lie. Politicians and those in power more so than most.

This was also probably not true, since the University of Opole had more than its share of rebel sympathizers, ranging from stoned students looking for a movement to join, to reflexively contrarian professors who enjoyed sticking it to the duke while still retaining tenure.
Page 84

Marce suspected some drivers had disabled autodrive to take control of their cars directly, either in a panic or because they suspected the government was somehow going to disable their movement. The end result either way was that these newly independent cars were messing things up for everyone else.
Page 91

I've been thinking about this for a while. Likely the subject of a blog post.

This reminds me of the quote, "The depressed and the realistic left and survived, the optimists stayed and died." The quote is about Jews in Nazi Germany.

Which did bring up the question: If you are leaving forever, what do you take with you?
Page 139

The final object was a threadbare stuffed pig named Giggy, bought for Marce on his first birthday by his mother, who had given Vrenna a stuffed bear named Howie at the same time.
Page 140

“Anyone can be a prophet. You just have to say that what you’re talking about is a reflection of God. Or of the gods. Or of some divine spirit. However you want to put it. Whether those things come true isn’t one way or another about it.”
Page 171

"Human institutions tend to drift from their creators’ intent over time. Another reason to have clear rules."
Page 172

“The short version is ‘Yes, but.’ The slightly longer version is ‘No, and.’ Which version would you like?”
Page 174

I love this distinction.

The man snorted at this. “An open planet is no place for humans. Give me a decent ring habitat any day.”

“Earth was an open planet.”

In The Collapsing Empire world, only one habitable planet remains, everyone else lives in man-made structures orbiting celestial objects or tunnelled into them. An entire race of agoraphobes.

“Stupid or they have a plan we don’t understand.”
Page 186

Love this. Characters with the insight to realize that just because you don't understand something doesn't mean it doesn't make sense. Scalzi is wonderful about reminding us of this.

“There’s no shame in pissing yourself like a goddamned fire hydrant when a trained killer is about to knife you in the throat.”
Page 191

“It’s not whether she tells everyone,” Huma said. “It’s whether they believe her.”

“Oh, my daughter,” Huma said, and smiled. “Don’t tell me you don’t know how little that actually means.”
Page 274

These people are nuts, Marce thought, and grinned to himself. It was breathtaking the situations that humans put themselves into, and still managed to thrive.
Page 275

Habitats could theoretically last decades or even centuries before they failed, but there was the human element as well. Humans didn’t react well to the knowledge they were cut off and doomed to slow death by habitat failure.
Page 287

“I’m continually confronted with the human tendency to ignore or deny facts until the last possible instant. And then for several days after that, too.”
Page 326

nodded. “Remember there’s a reason I suggested the name Grayland to you. To remind you what had to be done. And to inspire you to be the person to do it.”
Page 327

Wouldn't we all be better with an inspiration to do what needs to be done.

“That’s the human brain,” Attavio VI said. “It creates patterns when there aren’t any. Imagines causality when there is none. Imagines a narrative where none exists. It’s in the design of the brain itself. It’s primed to lie.”

“And primed to believe the lie.”