Tilt-A-Whirl« an older post
a newer one »The Man With The Golden Torc
Book Notes kitt decided around 21:53 on 1 December 2016 to publish this: 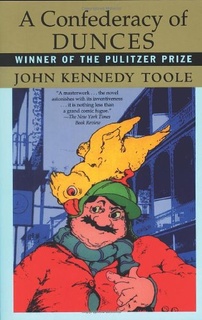 Okay, so this book has some reason for becoming a hit, right?

I didn't like it for one reason: the main character, Ignatius J. Reilly.

The basic plot is "Ignatius J. Reilly is an educated but slothful 30-year-old man living with his mother in the Uptown neighborhood of early-1960s New Orleans. Reilly, in his quest for employment, has various adventures with colorful French Quarter characters." Yeah. And "Ignatius Jacques Reilly is something of a modern Don Quixote—eccentric, idealistic, and creative, sometimes to the point of delusion." WHICH IS COMPLETELY INACCURATE.

Ignatius J. Reilly is an ass, pure and simple. He's a jerk, He's lazy. He hides in his bedroom instead of working, forcing his mother to support him. He blames others for his actions. He denies responsibility for his own actions. He is a destructive force in a relatively normal world. He steals from his employers. He causes some seriously bad events to happen, letting an old lady take the blame for a relatively bad misdeed.

Even his mother knows the guy is an ass, eventually deciding to throw him head first into life by kicking him out of the house.

The chuckles from the book really don't overcome the annoyance I had with all the "woo!" and "babes" in it. Yeah, it's a classic of a sort. I don't recommend it.

This was a play that I saw in

This was a play that I saw in Boston. It was mediocre.