The Book of Joan« an older post
a newer one »The Crossing
Book Notes kitt decided around 15:33 on 18 March 2018 to publish this: 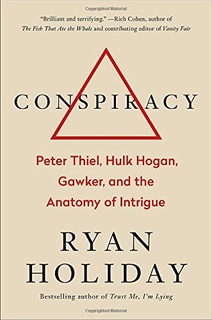 Okay, so, this was not the book I was expecting.

It is, however, the book I needed.

I am very glad that Ryan Holiday wrote this book. I am very glad I read this book. The book won't change anyone's life, but this book is an incredible tale about power, conspiracy, and the brilliant long-term maneuvering of someone Doing The Right Thing™.

Before this book, I pretty much thought Thiel was the Bad Guy™. He's not, by the way.

I strongly recommend this book. It may or may not change your life, but is far far far worth reading.

Our tendency to shy away from this truth creates a profound ignorance of how things really work, and what it means to be strategic, to be powerful, and to try to shape events rather than simply be shaped by them.
Location: 51

Seneca is the author you read when your life’s work has been destroyed,
Location: 131

The question of justice is beside the point; every conqueror believes their cause just and righteous—a thought that makes the fruits taste sweeter.
Location: 151

The existentialists spoke of ressentiment, or the way that resentment creates frustration which fuels more resentment. Philosophers might have said this feeling was pointless, but they knew it was a fearful force.
Location: 233

There is an old Scottish motto: nemo me impune lacessit. No one attacks me with impunity. Plots of revenge and justice plots both begin, in their own way, with a transgression, against a person or the whole. And then someone deciding that they aren’t going to take it.
Location: 381

They think someone should do something, but never them. Not me. It’s a classic collective action problem: we know things are bad, but they only affect each of us a little bit. So who is going to take care of it for us? Plenty of people believe in the theory of so-called great men of history, but who believes I am that great man?
Location: 437

Gawker reminded Thiel of the self-righteous people he had been railing against since he was a conservative polemicist in college: the people who claim the moral high ground, who claim to be about freedom of choice, but who bully everyone who doesn’t choose their way of freedom.
Location: 481

Twenty-five hundred years ago, Thucydides would say that the three strongest motives for men were “fear, honor, and self-interest.” Fear. Honor. Self-interest. All covered.
Location: 555

Eddie sees that Thiel’s main problem isn’t a legal one, it’s that he’s an outsider: not only does Thiel not like playing the game, he doesn’t even understand the game.
Location: 580

At eight, he has the look of someone who has already seen enough of the world to know what bullshit is, and to know that he’s smarter than most of the people he has met, including the adults.
Location: 633

Girard’s theory of mimetic desire holds that people have no idea what they want, or what they value, so
Location: 639

Or perhaps it was simply the traditional arc of the bully who becomes empowered the more he picks on others, grows to like the feeling it creates, and the longer he goes unchallenged, the more he comes to convince himself the status quo is tolerable for everyone involved.
Location: 647

One will come upon situations in life where it becomes increasingly clear that the normal
Location: 685

“Anyone who is threatened and is forced by necessity either to act or to suffer,” writes Machiavelli, “becomes a very dangerous man to the prince.”
Location: 697

The strategic benefit of adding a new coconspirator comes at the cost of substantially increasing the chance of getting caught.
Location: 801

While it’s dangerous to conspire with people who have a lot to lose, you can’t conspire without someone who is afraid to bet on themselves, who isn’t willing to take a big stake on something that very well
Location: 869

could fail. Where these two traits overlap there is often a sweet spot: the man or woman who has something to prove and something to protect, the strong sense of self-belief coupled with that killer instinct.
Location: 870

A start-up is, in Peter’s definition, “a small group of people that you’ve convinced of a truth that nobody else believes in.”
Location: 882

Just because you decide to operate along a line of interior ethics, however, doesn’t mean you’re stupid about it. You don’t have to disclose your intentions, for instance. No one said the fight needs to be fair, or that punches should be pulled.
Location: 959

was actually impossible to beat Gawker in court. Gawker had taken this uncertainty to mean something else, too: that no one ever would challenge them, and that if someone did, the challenger was destined to lose.
Location: 1,083

It has been the great collective self-deception of Silicon Valley, and perhaps of our age, that a person can engage in aggressive “disruption” of existing industries while pretending that they are not at least similar to the ruthless capitalist barons of the previous century, that there is not a drop of Carnegie or Rockefeller or Vanderbilt DNA in the whole business.
Location: 1,133

When someone categorizes something evil, as Sherman did, as Peter and Mr. A repeatedly did, he implicitly gives himself permission to do what needs to be done to destroy it.
Location: 1,207

choose your enemies wisely, he had been told, because you become just like them—but
Location: 1,240

No, fate sends to the conspirators of the world the best of its Murphy’s Law and entropy and crises of confidence.
Location: 1,690

Nick Denton is an inherently curious person, the kind of person who though he might not seek out such opportunities, when given the chance for a conversation with people who have radically different opinions from his own, he at least
Location: 1,836

A few dopamine-filled seconds of catharsis turned into fingerprints that ruined his chances of a clean getaway.
Location: 2,113

Most conspiracies are not found out. They are betrayed. Or they collapse from within, a betrayal of the cause itself.
Location: 2,425

And though we’d like to think that planning and resources—or righteousness and worthiness—determine who wins and who loses, they don’t.
Location: 2,830

I have heard Peter Thiel say over and over again that in the trial, Gawker argued the law while Hogan’s case argued the facts. “You argue the law to show how much you know about the
Location: 3,155

He had proven that “nothing you can do about it” is just what people who don’t want to do anything about it like to say to make
Location: 3,371

themselves feel better about their inaction.
Location: 3,372

Machiavelli warns conspirators that the most dangerous time is after the deed is done.
Location: 3,479

But like so many conspirators, they seem not to have stopped to ask, Okay, then what?
Location: 3,502

Cunning and resources might win the war, but it’s the stories and the myths afterward that will determine who deserved to win it.
Location: 3,526

The people who actually had to do the cleaning up, who needed to fight the war to a close, knew that this kind of language would only make the job harder. It had deprived Germany of a way to end the war earlier, it had united a collapsing enemy in desperation. Without a way out, tensions only increase and combatants have no choice but to fight on.
Location: 3,648

They worried that people would be less free to say what they think and feel for fear of being held accountable for it.
Location: 3,714

It would be a little more elegant if the reading public recognized their own contribution, that they get precisely the media that they click on and talk about.”
Location: 3,826