The Messy Middle« an older post
a newer one »Tiamat's Wrath
Book Notes kitt decided around 20:22 on 15 May 2019 to publish this: 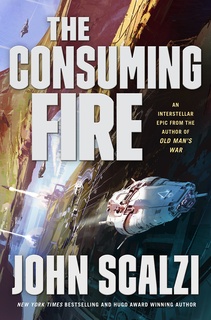 When the world is breaking down, scientists might be the scapegoats.
Location: 2,691

Book two of Scalzi's Interdependency series, this book continues Cardenia Wu-Patrick's reign as Emperox, along with the scheming Houses and the deteriorating Flow. We have political intrigues, sure. We have stunningly intelligent and rational characters, sure. We have a complicated sociopolitical galactic infrastructure collapsing as the edges are cut off from the center, and the network disintegrates. And we have a love story of sorts.

I didn't like this book as much as I liked the first book. I love Scalzi's writing, and will continue to read near everything he publishes. I'll read the next (last?) book in the series. Strongly recommended if you're a Scalzi fan, worth reading if you're a sci-fi fan.

The early bishops were well aware that charismatic religions have a tendency to breed schisms and divisions, which is against the fundamental concept of interdependency.”
Location: 224

Lenson read all he could stand and found his interest draining away, slowly at first and more rapidly as time went on.
Location: 254

Lenson was also aware that the cynical could afford the luxury of their cynicism because of the stability of the system they mocked.
Location: 281

Nor were observers of the time blind to the machinations of the Wu family as it made its play for imperial power. It was the focus of many handwringing editorials, news shows and occasionally attempted legislative action. What the Wu family had over them was organization, and money, and allies in the form of the other now-noble families.
Location: 359

When a lie has negative consequences, people dislike it. But otherwise? They move on, and eventually the lie as a lie is forgotten,
Location: 391

Assan’s current outburst was, alas, standard operating procedure for him. He was one of those people who believed social graces were for the weak.
Location: 439

“And you’ve seen this in your visions,” Assan said, pushing. Grayland smiled at this. “One does not need visions when one has data. In both cases, however, one does need to be willing to see.
Location: 563

“You do understand that ‘no doctrinal way to argue’ does not mean ‘no argument,’” Attavio VI said. “A church is an institution separate from the religion it serves. It’s filled with people. And you know how people are.”
Location: 597

Right, but the problem with that was, for a rich person, Kiva was spectacularly unmotivated by money. She liked money, and she liked that she had money, and she was aware that a life lived without money would well and truly suck. But having had enough money all her life for literally anything she ever wanted to do—being the daughter of the head of a noble merchant family had its perks—she never thought about money, and her own material needs were fulfilled with a small percentage of the money she had available to her.
Location: 993

You should know we intend to ask for your removal anyway.” “Good luck with that.” “We don’t need luck, Lady Kiva. We have your incompetence.”
Location: 1,052

There were more than a few scientists who knew one little thing, and then thought that knowledge was universally applicable to every other problem, to the point of excluding or discounting information from people whose specialty was that other problem.
Location: 1,108

But this latest bit makes me concerned that there is something else going on.” “It’s conspiracy mongering.” “I agree. But not all conspiracies crop up because someone forgot to adjust their tinfoil hat, ma’am. Sometimes they’re part of a disinformation campaign.
Location: 2,319

"I don’t know what else can be said about it.”

“That’s the point of rumors. They’re not based on anything, so nothing is very effective against them. Truth is no defense, and the people fielding these rumors know it.”
Location: 2,332

The one advantage we had, which is a thing I brought to the enterprise, was the understanding that the plan was not the goal. The goal was the goal, and we were going to get to it however we could. And if it meant changing our plans, sometimes in the middle of executing them, then we would.”
Location: 4,008

“That loose alliance of systems had fallen apart centuries earlier.” “And why was that?” “For the same reason many alliances fall apart—competing interests, lack of economic enthusiasm, stupid or venal rulers, and simple neglect, or some combination of each.”
Location: 4,352