Sleeping Giants« an older post
a newer one »The Girl From The Well
Book Notes kitt decided around 22:26 on 3 November 2017 to publish this: 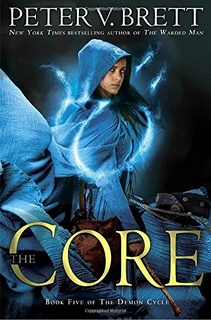 This is the final book in the Demon Cycle, and I enjoyed it.

It was longer than I expected it to be, but I had fair warning that it was going to be long, perhaps too many words. For the record, as wordy as Brett is, he doesn't compare to Rowling and her wordiness. Let's be clear, though, there was a lot of the book that could have been left out.

Told in the style of many different story lines all interweaving, cough Wheel of Time cough, cough Song of Ice and Fire cough, there were a couple story lines that just didn't add to the story. Ashia and Abban? "He still has a part to play." What part? There was no part. That entire storyline could have been dropped from the book, shortening the book by 17% (I made up that number), and increasing the reader's enjoyment by 11% (made that one up, too).

The part I found the most fascinating about the book, however, was my reactions to Renna. I did NOT want the hero of the story to be the uneducated, hick-in-the-derogatory-way, reckless, female character. I didn't want that AT ALL. There were no repercussions for her continually bad choices. Things "worked out." Yes, fiction, yes, good for her, yes, go Brett for making the woman the hero, but why did I have this reaction? That why is a fascinating topic for me to explore.

I liked this book more than the previous one. I'm annoyed a bit at the ending, but we all saw it coming, so I didn't end up throwing the book across the room which is good. Still. Not a fan of the ending.

"None could prove they’d taken you to bed, but folk don’t need proof to whisper.”

He considered himself above reproach and was offended by her mistrust.
Page 38

Briar was Briar, and that wasn’t going to change. The path that made him who he was could not be unwalked.
Page 65

"Write our own destinies, Leesh, long as we got the stones to do it.”
Location 3579

“Don’t think anything will,” Arlen said. “Belief is stubborn as a rock demon.”
Location 3678

Arlen looked at him, incredulous. “Taught me yourself Deliverers don’t exist.”

“I taught no such thing,” Ragen said. “I said when humanity needed them, great generals rose to lead us. Their existence is documented, Arlen. It’s a fact. The Creator didn’t come down from Heaven to confirm it then, and I don’t expect He will now, but that doesn’t change the fact that our whole world has shifted because Arlen Bales had a stubborn streak.”
Location 3682

“How you gonna cry over someone you barely knew?” Renna asked.

“Oh, sister,” Shanvah said sadly. “Tears are never hard to find. Tell me of the son of Jessum.”
Location 3846

She ran to him, weeping with joy, and he returned the embrace as she threw her arms around him. For a moment, he allowed himself to forget his purpose, to be her son one last time, safe in his mother’s arms.
Location 4643

I understand this, even as an adult these many years, the safety one can feel in one's mother's arms.

Jardir scowled. “I was a fool to leave Hasik alive. Every time I have shown him mercy, I have regretted it.”

“Mercy should never be cause for regret,” Inevera said.
Location 4931

Her aura was as bright as any Jardir had seen short of the Par’chin and his jiwah, but… clean. Unburdened by compromise, failure, or shame.
Location 5027

Can you imagine? An aura unburdened?

“How long ago was that?” Arlen asked.

“Hard feelings only get heavier with the years,” Jeph said. “Till the weight of it breaks you, and you snap.”
Location 5491

“You listen to me, Jeph Young,” Arlen said. “As your brother and your elder. Ent no such thing as a Deliverer. That’s work every man and woman’s got to do for themselves. Can’t count on someone to save you from the demons. Learn to save yourself—and others, when you can.”
Location 5519

“All have our low moments,” Arlen said. “Things we carry even when folk around us forget, or never knew.”
Location 5671

“Had every right to carry a grudge,” Jeph said.

“Ay, maybe, but grudges never made anyone a better man,” Arlen said.
Location 5676

“Mistakes are easy to see, when you look back.”
Location 5776

Amon was no more receptive than the station officers. “Harden’s Grove has stood for a hundred years, Ragen. We’re not going to abandon everything we’ve built over some demon attacks a week’s ride to the south.”
Location 6068

Okay, this is a complete logic fallacy. "It hasn't happened, so it won't happen." Hand the man a copy of The Black Swan, please.

“Perhaps I will try.” She reached for a stalk and took a bite. The herb was bitter, but so were many things in life.
Location 7590

“My master used to say Everam draws power from our courage. Will is the one gift we can give to aid Him in His never-ending battle against Nie. Everam guides us, but the choice to be fearless or a coward, to fight or flee,” Ashia reached out, touching his chest, “this comes from within.”
Location 7810

“’Sides.” The Par’chin shook his head. “Startin’ to think it don’t matter if Everam’s in the sky or in your imagination. It’s a voice that tells you to act right, and that’s more than most folk have.”
Location 8494

Nonetheless, the Krasians to her left made her nervous. Favah was not one to wear trousers or sit atop a horse. She was carried across the Hollow on a palanquin borne by six muscular eunuchs in Sharum black, their wrists and ankles bound in golden shackles. The men ran in perfect unison, easily keeping pace with the horses. None was breathing hard as they set the palanquin down and opened the curtains for the ancient dama’ting. The six slaves were a gesture of defiance from Favah, a reminder that she would not be bullied, even if she had agreed to Leesha’s terms. There is no slavery in the Hollow, Favah had been told, but she paraded the men before the Hollowers, daring a confrontation. Leesha knew better than to take the bait. The men, mutilated and conditioned by the dama’ting, did not wish for freedom. Indeed, their auras sang with pride. In addition to their mistress’ weight, the men carried spears and shields of warded glass, and Creator only knew how many other weapons about their person. If Leesha or anyone else tried to free them, there would be blood.
Location 9223

Conditioning from childhood is hard to break. Ask me about Jesus being the son of God, and I'll explain.

“Too good, yet never good enough. I’ve made my peace with it, but it never stops stinging.”

Erny shook his head. “I love her, Leesha. Always have, always will. There’s never been another woman in the world to me. I’m not going anywhere. Not from this bench, not from this marriage. We said our vows…”

“But only you keep them,” Leesha said.

Erny looked at her. “Is that the only time we should keep our promises, Leesha? When others do? I taught you better than that.”
Location 10848

“I answered your every question truthfully, Explorer. Blame yourself if you did not ask enough. I am your prisoner, not your friend.”

“And we’re stronger for it.” Shanjat eyed Jardir. “No wasted sentiment leading to foolish action.”
Location 10997

“There is always choice, Renna am’Bales,” Inevera said. “It is the ultimate power, what makes the infinite futures finite. But Everam guides us to the right ones, like pieces on the board.” Renna rolled her eyes but said no more.
Location 11211

“Never in my adult life have I been without your counsel,” Jardir said. “I did not realize how much I had come to depend on it.”

“Is that your way of saying you miss me?”

“A Sharum must always be ready to die, mistress,” Micha said. “We keep thoughts of it close to remember to always be prepared, to keep our spirits pure. To know that life is a fleeting gift of Everam, and death comes for us all. Inevera, when the lonely path opens to me, I will walk it without looking back.”
Location 11713

Thamos’ words came to her. There are times a leader must remain firm, even when they are in the wrong. Leesha hadn’t agreed at the time, but she saw the wisdom in it now.
Location 11935

Even the palm weeps, when the storm washes over it, Enkido once told her. The tears of Everam’s spear sisters are all the more precious for how seldom they fall.
Location 12902