It's Even Worse Than You Think« an older post
a newer one »The Twentieth Wife
Book Notes Posted by kitt at 17:04 on 3 April 2018 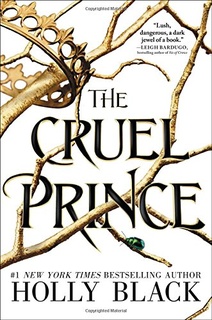 This is book one of the Folk of the Air series, which has only this book published so far. I had seen this book on multiple recommendation lists on Book Riot, so reserved it at the library and read it this week when it dropped into my book queue.

I wanted to like this book more than I actually liked it after reading it.

I wanted the main character to have some sort of growth, some sort of conflict from which she learns and grows, and then I wanted to see the application of said growth.

Instead, it was mostly a couple weeks of teenage angst in Fairy Land, a bunch of world building, and a twin who isn't anything like her copy.

If you're a fan of The Mortal Instruments, say, well, the author is, too, so you'll have a similar read to those books. And, if you're a fan of fiction set in Faerie, this is an enjoyable read.

Sadly for this book, I am neither.

I don't think he realizes just how angry I am or how good it feels, for once, to give up on regrets.
Page 79

"I think we could both bear it better if no one else had to see," she says, then takes a long pull of her tea.
Page 81

"I want you to fix things with him," she says. "Prince Cardan's got all the power. There's no winning against him. No matter how brave or clever or even cruel you are, Jude. End this, before you get really hurt."
Page 81

"Desire is an odd thing. As soon as it's sated, it transmutes. If we receive golden thread, we desire the golden needle..."
Page 97

"No, nothing bad," I tell her. "I don't know exactly what he came for, but he kissed my hand. It was nice, like out of a storybook."

"Nice things don't happen in storybooks," Taryn says. "Or when they do happen, something bad happens next. Because otherwise the story would be boring, and no one would read it."
Page 150

"You don't need to believe me. There are a dozen more rumors just as terrible. When there is a lot of power concentrated in one place, there are plenty of scraps to fight over. If the Court isn't busy drinking poison, then it's drinking bile."
Page 217

This is part of my training - probably the aspect the Ghost thinks is most essential, after slyfooting. He has told me again and again that most of being a killer and a thief is waiting. The hardest thing, according to him, is not letting your mind drift to other things. He seems to be right.
Page 226 - 227

But we all want stupid things. That doesn't mean we should have them.
Page 231

"Its maker called it Nightfell, but of course you are welcome to call it anything you like or nothing at all. It's said to bring the wielder luck, but everyone says that about swords, don't they?"
Page 234

Most often what I failed to do was accurately anticipate his next moves. I had a great stratgey for me, but not for the game I was in.
Page 341

Somehow, Balekin has drawn Cardan into his convesation with Severin. Cardan laughs at something Balekin said, looking as comfortably arrogant as I've ever seen him. I am shocked by the recognition - if you live your life always afraid, always with danger on your heels, it is not so difficult to pretend away more danter.
Page 359

Outmaneuvering Madoc wasn't nearly as satisfying as I wanted it to be, especially since I was able to do it because he never thought of me as someone who would betray him.
Page 366

"Think of being here with Vivi as an apprenticeship. You learn what you need to know, and then you come home."

"How will I know when I've learned it, since I don't know it now?" he asks.

The question sounds like a riddle. "Come back when returning feels like a hard choice instead of an easy one," I finally answer.
Page 377