A Tree Grows in Brooklyn« an older post
a newer one »Strange Dogs
Book Notes Yeah, kitt finished writing this at 13:01 on 27 August 2017 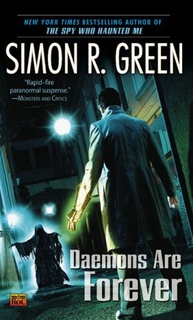 Book 2 of the Secret Histories series.

Having read the first book in this series, and Green's Nightside series (and really liking the Nightside series), I was excited to start this book. The last book seemed to be the start of a long adventure, but still self-contained.

So, this book was a bit of the "I have just finished a grand adventure, I have power, what do I do with all this new power?" Well, you don't handle it well, you ignore those who supported you in your uphill battle, you do a lot of things wrong, and you become a jerk.

Based on how long-winded Green is in this book, and the reviews of subsequent books commenting about how the main character becomes cruel, I'm choosing not to continue reading this series. When I finished the first book, I was somewhat excited about this one. I'm not excited about this plot at all. I recommend the Nightside series over this one, by a long shot.

Maybe this is an okay book to read if you're a Green fan, but I'm not sure. I don't recommend it. Leave your memories of Eddie with the first book.

"When you work as a field agent, you learn pretty fast you can’t trust anyone."

“Not even those close to you?” said Molly, studying me solemnly with her huge dark eyes.

“Especially those. You always know where you are with an enemy; it’s only friends and loved ones who can betray you.”
Page: 6

The truth might set you free, but there’s nothing that says you have to be grateful.
Page: 6

“Never get attached to possessions,” Molly said briskly. “They’re just things, and you can always get more things.”
Page: 6

"Do you believe in karma, Molly?”

And you can’t ever be really close to anyone, when the life you share is a lie.
Page: 13

“If you start getting maudlin on me,” Molly said firmly, “I will slap you, and it will hurt. I told you; never look back. All you ever see are mistakes, failures, and missed opportunities. Concentrate on the here and now!"
Page: 14

“No,” said Molly, not raising her head from my shoulder. “You only thought you did. Welcome to the real world, Eddie. Hateful place, isn’t it?”
Page: 14

... a lot of them wanted to denounce other people as being against progress, or in favour of the wrong kind of progress, or just guilty of the sin of not agreeing with the speaker’s ideas.
Page: 27

“To keep me honest,” I said. “To tell me the things I need to know, whether I want to hear them or not. To rein me in when I go too far, try to make changes too quickly. Or to spur me on if I start dithering. You’ve always been the sensible one, Penny. A terrible thing to hear, I know, but facts are facts. If I can’t convince you something is right or necessary, maybe it isn’t. And . . . you know a hell of a lot more about running things and organising people than I do.”
Page: 40

So I chose people to advise me who I could trust to tell me the truth, whether I wanted to hear it or not; and who together might just be a match for me, if I looked like getting out of control.
Page: 47

No, he was Merlin Satanspawn, the Devil’s only begotten son. Born to be the Antichrist, but he refused the honour. He always had to go his own way.
Page: 56

This cracked me up, as Merlin Satanspawn is in the Nightside series, too.

There’s always someone we’d like to speak to in the past. Friends and relatives and loved ones, gone too soon, before we could say all the things we meant to say to them. The things we put off saying, because we always thought there’d be time . . . until suddenly there wasn’t.
Page: 58

“There are two main threats to humanity,” the Armourer said ponderously, slipping into his lecture mode. “Doesn’t matter whether they’re scientific or magical in origin, mythical or political or biblical; all of humanity’s enemies can be separated into two distinct kinds. Those who do us harm because they hope to gain something from it; these we call demons. And those who are too big to care about us, but who might do us harm just because we’re in the way; those we call gods, for want of a better word. The family is trained and equipped to deal with demons. The gods are best handled delicately, from a safe distance, and through as many intermediaries as possible.”
Page: 59

"You want them destroyed almost as much as I do, and the enemy of my enemy can be my ally, if not my friend.”
Page: 75

“You can’t trust anything he says. Hell always lies, except when a truth can hurt you more.”
Page: 76

“You are allowed to hold me when you’re feeling down, you know,” said Molly. “It’s allowed, when you’re in a relationship.”

“So we are definitely in one of those relationship things, are we?” I said.

“Yeah. It sneaked up on me when I wasn’t looking. You can squeeze my boobies, if you like.”

Look forward, never back. And never get too attached to anything or anyone, because the enemy will use that against you.
Page: 85

“Not everything that happens here is part of some conspiracy; it just seems that way."
Page: 99

The cemetery was dominated by Victorian styles, with oversized tombs and mausoleums, and fancy graves. That whole period was fascinated with death and all its trappings, and the graveyard was positively littered with statues of weeping angels, mourning cherubs, and enough morbid carvings and engravings to make even an undertaker shout Jesus! Get a life, dammit!
Page: 129

“Never look back, boy,” the Armourer said gruffly. “Concentrate on what you’re going to do next. Doesn’t matter if you lose a battle, as long as you win the war."
Page: 168

“There’s more to being a leader than being right,” said Penny. “You have to inspire, to motivate . . . and to know when to play politics with the right people.”
Page: 194

"The principles of waging war are really quite simple: divide and conquer, identify and strike at weak spots, and most of all, get everyone else so confused they don’t dare do anything for fear of doing the wrong thing.”
Page: 224

Failing that . . . you kill me, while I’m still me. Before I become something we’d both hate.”

We talked some more, but didn’t really say anything. Just the normal, reassuring things you say when you’re afraid in the dark.
Page: 280

"You can never trust politicians to do the right thing, Edwin, because at heart all they really care about is staying in power. They live in the present; it’s up to us to take the long view.”
Page: 288

“Everyone has to grow up eventually. All it took for me was an other-dimensional parasite infecting my body and eating my soul.”
Page: 306

“We all have things in our life that we would wish undone,” William said carefully. He clearly wanted very much to swallow, but didn’t dare. “But sins can never be undone. Only pardoned.”
Page: 320

Ever since he retired from field work, Uncle Jack had not so much lost his people skills as thrown them away.
Page: 323

The Sarjeant-at-Arms made his guns disappear again, and folded his arms tightly with a definite Look at me I’m not sulking even though I have cause expression on his face.
Page: 357

The weapon didn’t actually look like much, but then, the really nasty ones often don’t.
Page: 359

“This is the place where quests fail,” Subway Sue said quietly. “Where love is always unrequited, promises are broken, and only bad dreams come true.”
Page: 369

“Always a good idea to have a little surprise in reserve. For when you absolutely have to kill every living thing that annoys you.”
Page: 373

"A trained soldier with a blade is a match for any number of unarmed rabble.”
Page: 373

There were so many things I wished I’d done, or said. So many things I meant to do . . . but I suppose that’s always true, no matter when you die.
Page: 373

“It’s just another place,” he said. “The details change, but that’s all. You can cope. You can adapt. Because you’re human, and that’s what humans do. We roll with the punch, and we come back fighting. If you can’t cope with what you’re seeing, let your mind translate it into something you can cope with. You’re stronger than you think, Eddie, Molly. No matter how weird things get here, remember; it’s just another place.”
Page: 390

It might be a very small thing to be human, in this largest of worlds, but even the smallest insect can pack a deadly sting.
Page: 390

“Manifest Destiny is an idea, a philosophy. It’ll always be around, in some form or another. There’ll always be small, bitter people ready to follow some charismatic leader who promises them peace and happiness through justified violence and the killing of scapegoats.”
Page: 400

What good would it do? Sometimes love is in the things we don’t tell each other.
Page: 403