We Are All Completely Fine« an older post
a newer one »Heat Lightning
Book Notes Posted by kitt at 22:06 on 27 April 2015 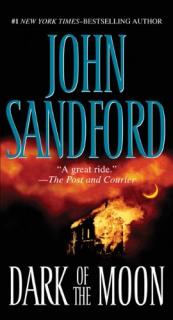 A couple days ago, Mom had commented to me that I should start the John Sandford Virgil Flowers series. She had read them and enjoyed them, the lead character's wit and humour entertaining her. I had looked (casually, not intently) in the condo association's lending library for the first one, Dark of the Moon, without success and didn't think much of it. So, when Mom and I were at the giant bookstore in Kona yesterday, she found the book, and handed it to me to buy. Bookstore. Recommended book. Place to donate the book when I was done so that I didn't have to lug it home at the end of my vacation. All of this was leading nicely to a "Yes, please."

Boy, was I glad I bought it. I started it last night, and finished it today. As is with most vacations that aren't ultimate frisbee or safari or Antarctica bound, I had a day of sick. That would be today, so having a book to read was fantastic. In this case, also very entertaining.

John Sandford has a Prey series about some Davenport guy. Virgil Flowers, the lead character in this new Dark of the Moon series, works for said Davenport (so, clearly, in the same world, which is nominally modern day Minnesota). He's a several times divorced officer of the Minnesota Bureau of Criminal Apprehension (I had no idea such a thing existed, and looked it up. Yep.). Flowers (that would be fucking Flowers, as we learn in the book, to Mom's immense entertainment) solves murders, as far as I can tell, 8-10 a year. This first one is located near his home town, involves women (like the Reacher books, I suspect, which is to say, a new one every book), what I would expect to be realistic male thinking ("look at the ass on that woman!"), a murder mystery (well, durrrr), and resolution. I suspect later books will have winter themes, given, well, Minnesota.

I enjoyed the book. I'll recommend it to action-adventure-modern-day-cop-murder-mystery-loving readers. It's not gritty like the Bosch books, less witty than the Longmire books, and still entertaining.

How delightful Mom found books 2 - 4 in the condo association's lending library, where book 1 is about to be added.