The Collapsing Empire« an older post
a newer one »Norse Mythology
Book Notes kitt decided around 20:50 on 22 May 2017 to publish this: 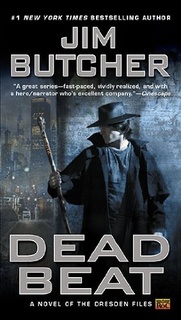 I figured out a few reasons, but I think the top reason is that this is the first (and one could argue only) book that Dresden is vulnerable. He asks for help. He reaches out. He reaches out to his friends, and they say yes. He confronts his own mortality. He talks about death. A lot.

Which is pretty much what the book is about, with necromancers and all happening in it.

This book also has Butters, an unassuming unmagicked mortal, seeing a horrible act and, screaming like a little girl the whole time, pushes against his fear to do what needs to be done to save a life.

In any book, you see the author come through in her characters. I would believe Butcher was experiencing loss when he wrote this book, perhaps even actual deaths in his family. I haven't looked up what was happening in his life when writing this book, so I don't know if he were. Yet here, for the first time, Dresden isn't just a know-it-all, isn't an all-powerful arrogant witty Warden wizard, he's also human. And that's what I liked so much about this book.

Death isn’t something anyone likes to think about, but the fact is that you can’t get out of it. No matter what you do, how much you exercise, how religiously you diet, or meditate, or pray, or how much money you donate to your church, there is a single hard, cold fact that faces everyone on earth: One day it’s going to be over. One day the sun will rise, the world will turn, people will go about their daily routines—only you won’t be in it. You’ll be still. And cold.
Location: 461

“You don’t need to buy it,” I said. “It’s true. As a race, we’re an enormous bunch of idiots. We’re more than capable of ignoring facts if the conclusions they lead to make us too uncomfortable. Or afraid.”
Location: 1200

“I know how you feel,” I said. “You run into something you totally don’t get, and it’s scary as hell. But once you learn something about it, it gets easier to handle. Knowledge counters fear. It always has.”
Location: 1,283

In the past I hadn’t seen so many people hurt and killed and terrorized by the same kind of power that damn well should have been making the world a nicer place, or at the least staying the hell away from it. I hadn’t made so many mistakes back then, so many shortsighted decisions, some of which had cost people their lives. I had been sure of myself. I had been whole.
Location: 1,670

“And will for years to come,” said Cowl. “A great many things of significance happened that night. Most of which you are not yet aware.”

“Hell’s bells,” I complained. “I’m a wizard myself, and I still get sick of that I-know-and-you-don’t shtick. In fact, it pisses me off even faster than it used to.”
Location: 1,717

It was 100 percent pure, contrary stubbornness. Chicago was my town. I didn’t care who this joker was; he wasn’t going to come gliding down the streets of my town and push in my teeth for my milk money.
Location: 1,799

Cowl gave me a look that I felt, even if I couldn’t see his face, and he growled, “This isn’t—”

“That fear is natural. But it is also a weakness. A path of attack for what would prey upon your mind. You must learn to control it.”

“No one can tell you that,” he said. “Not me. Not an angel. And not a fallen angel. You are the product of your own choices, Harry, and nothing can change that. Don’t let anyone or anything tell you otherwise.”

He put his hand on my head, and for that brief second I was a child again, tired and small and utterly certain of my father’s strength.
Location: 2,303

“At least they didn’t wreck this,” he said. Then he let out a short laugh. “Man. Are my priorities skewed or what?”

“It must be very lonely, doing what you do.”

“Always being so strong when others can’t. That’s…well, it’s sort of heroic.”

“It’s sort of idiotic,” I replied, my voice dry. “Heroism doesn’t pay very well. I try to be cold-blooded and money-oriented, but I keep screwing it up.”

She let out a little laugh. “You fail to live up to your ideals, eh?”

I’d always considered the line between black magic and white to be sharp and clear. But if that dark power could be employed in whatever fashion its wielder chose, that made it no different from my own.
Location: 3,658

Dammit. Investigation was supposed to make me certain of what needed to be done. It was not supposed to confuse me even more. When I opened my eyes, thick clouds had covered the sun and painted the whole world in shades of grey.
Location: 3,660

“He lets his fear control him. That’s what a coward is, Harry.”

“A lot of people would react the same way,” I said.

“A lot of people aren’t making themselves into excess baggage for my brother,” he shot back.

“Doesn’t make him a bad person,” Thomas said. “But he’s a coward. He’s either going to get you killed or else freeze at a bad moment and die—and you’ll torture yourself over how it’s all your fault. If we want to survive, we need to get him somewhere safe. Then cut him loose. Better for everyone.”

I thought about it for a minute. “You might be right,” I said. “But if we tell him to rabbit, he’s never going to be able to get over the fear. We’ll be making it worse for him. He has to face it down.”

“I understand your refusal to allow another to control your life. It’s a poisonous, repugnant notion to think of someone who would dictate your every move, impose upon you a code of behavior you could not accept, and refuse to allow you choice, expression, and the pursuit of your own heart’s purpose.”

“Pretty much,” I said. The fallen angel smiled.

“Then believe me when I say that I know precisely how you feel. All of the Fallen do.”

A little cold spot formed in the pit of my stomach.
Location: 4,678

From the time we are infants, we learn to associate the touch of a human hand with safety, with comfort, with love.
Location: 4,990

Nearly everyone underestimates how powerful the touch of another person’s hand can be. The need to be touched is something so primal, so fundamentally a part of our existence as human beings that its true impact upon us can be difficult to put into words. That power doesn’t necessarily have anything to do with sex, either. From the time we are infants, we learn to associate the touch of a human hand with safety, with comfort, with love.
Location: 5,262

“Ah,” I said. “Then you’ll probably go to the second offer I always get. Go away and you won’t kill me.”

“Or maybe I’m just not quite arrogant enough to start rearranging the universe on the assumption that I know better than God how long life should last. And there’s a downside to what you’re saying, too. How about trying to topple the regime of an immortal Napoleon, or Attila, or Chairman Mao? You could as easily preserve the monsters as the intellectual all-stars. It can be horribly abused, and that makes it dangerous.”
Location: 5,434

“I think that you do not realize your own reputation. You have overcome more enemies and battled more evils than most wizards a century your senior... To them, you are a symbol of defiance to the conservative elements of the Council, and a hero who will risk his life when his principles demand it.”
Location: 5,845

“Maybe it’s the cloak,” Bob suggested brightly. “Harry, do you feel any more judgmental and self-righteous than you did this morning?”
Location: 5,944

Besides, I found it aesthetically satisfying to defy municipal code.
Location: 6,356

“Actually, when you survive it gets reclassified as ‘courageous.’”
Location: 7,130

I knew people who would face death, even embrace it, rather than surrender their principles. I’d seen burned-out cops before. They’d labored long and hard in the face of danger and uncertainty to uphold the law and protect the victims of crimes, only to see both the law and the victims it should have protected broken, beaten, and abused again and again. It mostly happened to the cops who genuinely cared, who believed in what they were doing, who passionately wanted to make a difference in the world. Somewhere along the way, their passion had become bottled anger. The anger had fermented into bitter hatred. Then the hatred had fed upon itself, gnawing away at them over years, even decades, until only a shell of cold iron and colder hate remained.
Location: 7,585

As Morgan struck, I took the coward’s way out and closed my eyes. I knew that it was inevitable that one day I would die. But I didn’t want to watch it coming.
Location: 7,621

Cowl’s apprentice was tough and competent, but no amount of training or forethought can prepare you for the sight of an angry dinosaur coming to eat your ass.
Location: 7,907

"...And that I hurt. And that I want someone to be holding my hand when it’s my time. I don’t want to do it alone.”