Bound« an older post
a newer one »Mockingbird
Book Notes Yeah, kitt finished writing this at 17:31 on 14 April 2017 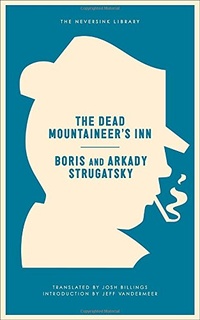 The full title of this book is "The Dead Mountaineer's Inn: One More Last Rite for the Detective Genre". It is the first Russian science fiction book I recall that I have read. I picked it up on the recommendation of Rob Brackett, who had read it and was enthusiastic while reading it, and less enthusiastic after the ending, which intrigued me. I had the book a while before reading it, but I'm not sure why the delay (wait, no, yes, I am).

The story starts with the protagonist, Inspector Glebsky, arriving at a remote mountain inn for a couple weeks relaxation away from his job, his wife, his life. He went to the inn on the recommendation of a colleague, Zgut. A few other guests appear before a murder happens, followed by an avalanche, which traps the guests in the inn until rescue.

Now, the genre of the book is science fiction, but it reads as a mystery. The ending makes it science fiction. The book also reads a little absurd, which I think is part of its appeal. Some of the internal monologues of Glebsky (Is he a police officer or a second-hand sink salesman? I couldn't tell.) are hysterical.

I made the mistake of attempting to read the introduction by Jeff Vandermeer, the author of The Southern Reach trilogy. I found his books boring, and his introduction just as awful. He goes into the plot of the book and saying "isn't this great!" before I know anything about the book, and I'm like, "Uh..." The man even gives away some plot points, along with his usual convoluted writing style. I am so not of a fan of that author.

The book is an entertaining read, not sure I'd recommend it if you're not already a fan of Russian science-fiction, though. If you are, though, you probably have already read this one.

In my new scale of book recommendations, this has a fan rating.

“Two vices, to be precise: first, the pettiness of any criminal motive, and second, the imminence of a boring, disappointingly dull, plausibility-killing, awkward explanation. You can count all possible motives on the fingers of one hand … Your interest inevitably declines as soon as whos and whys are revealed.”
Location 170

“Haven’t you ever noticed, Mr. Glebsky, how much more interesting the unknown is than the known? The unknown makes us think—it makes our blood run a little quicker and gives rise to various delightful trains of thought. It beckons, it promises. It’s like a fire flickering in the depths of the night. But as soon as the unknown becomes known, it’s just as flat, gray and uninteresting as everything else.”
Location 289

"No doubt my gracious host couldn’t care less. Kaisa’s dumb. To ask Simone would be to bring his undead laughter back to life … But then what am I doing? Why do I care? Should I grab more roast? Kaisa is dumb, that’s for certain, but she knows a lot about cooking …"
Location 516

"Mr. Simone has provided me with an inexhaustible source of reflection on the glaring discrepancy between a man’s behavior when he’s relaxing, and the value for humankind of that same man when he’s at work.”
Location 651

At the height of his triumph, when the Viking was already towering over the porch, leaning picturesquely on one ski pole as he smiled dazzlingly at Mrs. Moses, fortune gave her wheel a little tap. Lel the St. Bernard made his way to the winner, gave him an intent sniff and then suddenly, with a quick, precise gesture extended his right paw out directly over his ski boots. I couldn’t have scripted it better myself. Mrs. Moses screamed, the crowd burst into a series of hearty curses, and I went back inside. I am not a gloating man by nature.
Location 738

“Do you remember what Hannibal did to the Romans near Cannes?”
Location 881

“When a murder is being investigated, good citizens have a responsibility to provide the police with the desired information,” I said strictly. “Failure to do so could be seen as complicity.”
Location 2565

The only problem was that, if this was the case then there was nothing left for me to do but turn in my weapon: as some writer or another said, the afterlife is the church’s business, not the police’s.
Location 2707

Within the frame of his craziness all the means eventually became ends.
Location 3085